Sharing music encompasses a lot more than sending someone an MP3 over a chat client. Oh, all the times I remember riding a sunrise train out of the city with my girlfriend at my side, wishing we could just listen to the same music at the same time without splitting a pair of headphones. Is that so much to ask?

That’s the founder behind MyStream, a new (and temporarily free) app just launched for iPhone that lets users wirelessly stream music to the devices of those around you. Listen to tunes simultaneously with friends without splitting headphones.

It’s a music lover’s dream. And it’s easy as pie to use.

Download and fire up the app (watch it load all the albums already stored on the device), connect to a Wi-Fi network, choose a name for your stream, select a few tracks or albums from your collection and start streaming. After that, multiple MyStream users on the same Wi-Fi network can access your stream.

If Wi-Fi isn’t available, then users can connect via Bluetooth.

There’s a one to two-second lag between the hosting user’s audio and those listening, but Zelson says developers are working on correcting the issue.

The cool thing is that all listeners can see the song information, including album art, artist and song title. And it’s only a couple clicks for the user to purchase the song through the iTunes Store.

Though the app is free today and for the indefinite future, MyStream will eventually cost $1.99. Since the app currently brings in revenue through advertising, I asked Zelson whether he would follow the model of other apps by releasing an app-free paid version while still keeping the ad-supported free version. He said he’d consider.

Notably, Zelson says he intentionally left out integration with social sites like Facebook and Twitter because he thought it would just prove “a burden” to users. His theory is that Web and mobile services have been mindlessly obsessed with social and that sometimes people just want to use their technology without broadcasting about it to the world. I kind of agree and so did another entrepreneur I interviewed not too long ago. I’m starting to wonder whether this whole anti-Zuckerberg thing could start to be a trend in 2011.

Either way, check out MyStream and let us know how you like it. 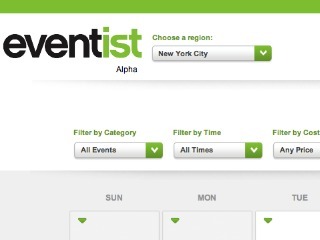 Eventist: Not another social events calendar