The president will be meeting with Schmidt, Zuckerberg, and Jobs to discuss innovation initiatives

As part of his ongoing campaign for greater tech investment and development, President Obama will be meeting with Silicon Valley business leaders Thursday. The complete roster has not been released, but Google's Eric Schmidt, Facebook's Mark Zuckerberg, and Apple's Steve Jobs will be attending the meeting, which is reportedly being held at a private home and will be closed to the public and the press.

The meeting will center around Obama's recently announced innovation initiatives, which will make permanent the tax credits for research and development, address the problems underlying the patenting system, and advance broadband connectivity to the nation's rural areas. The initiatives are part of Obama's proposed $3.73 trillion fiscal year budget for 2012, which aims to trim roughly $1 trillion of the country's deficit through spending cuts, tax increases, and investment in business and technology.

The plan calls for the injection of $148 billion into federal research, with $32 billion going to the National Institutes of Health. Additionally, $18 billion will go toward the President's nationwide broadband project.

After meeting with business and technology leaders on Thursday, Obama will jet off to Hillsborough, Oregon to meet with Intel CEO Paul Otellini and tour the company's still under-construction semiconductor manufacturing plant and speak with the company about its STEM (science, math, engineering, and technology) program for local students.

Obama recently visited Silicon Valley in October to rally support for Democratic incumbents during the midterm campaigns. During that visit, Obama attended a fundraising event at the house of Google Executive Marissa Mayer. He also met privately with Steve Jobs in a one-on-one meeting in a hotel room in San Francisco, where they discussed "American competitiveness and education, especially reforms such as the President's Race to the Top initiative," said then-spokesman Robert Gibbs in a statement.

Of course, this will be the first time Steve Jobs has stepped back into the public eye after Apple announced he would be taking a medical leave of absence. 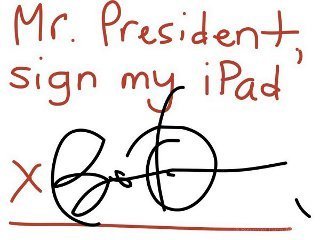