Social shopping site ShopSocial (tongue twister!) has raised $1.2 million in funding, according to an SEC filing.

While the startup has yet to publicly comment on the funding, the filing lists Todd Parsons, Marc Michel and Rob Siegel as “Related Persons” in the round. Michel is a partner at Metamorphic Ventures in New York City and Siegel is a general partner at X/Seed Capital Management in Silicon Valley. Both Metamorphic and X/Seed Capital are early stage venture firms.

Parsons, the first listed on the form, is the very same who co-founded and once served as CEO for BuzzLogic, a digital media company that helps publishers optimize advertising for social media.

BuzzLogic has been pretty quiet lately, but Parsons has apparently been hard at work building up a new company, ShopSocial, which plants itself firmly at the crossroads between social media and e-commerce. Basically, the company lets brands, businesses and merchants supplement their ads and product pages with buttons for users to share the content on Facebook.

Don’t call it “just another share button,” though. The idea behind ShopSocial is that users will be rewarded monetarily for sharing stuff with their friends. For example, post a Gap peacoat to your News Feed and you’ll receive $5. It’s a really simple (and great) idea, but I'm sure some complications need ironing out. (How many of these offers can one user accumulate? What happens if the user takes the $5 and then immediately deletes the post from their Facebook?)

ShopSocial is still in beta, probably working out a lot of these extra details, and wants to launch later this quarter.

By the way: don’t be alarmed if you’re experiencing a bout of déjà vu; a very similarly-named social commerce startup (called ShopSocially) just raised a very similarly-sized funding round ($1.1 million) less than three months ago. This is obviously a hot trend, so expect to see even more startups cropping up in this space.

ShopSocial.ly makes it easy and fun to give and  get shopping help from friends. You can help friends out by sharing your shopping expertise. And you can ask their help when you are buying something

Twelvefold Media (formerly BuzzLogic) is the only emotive-based media company that helps brands target, reach and persuade engaged audiences by delivering the right ad, in the right place at the right time to the most motivated customers in the right mindset.

Twelvefold creates customized digital media packages with proprietary technology that utilizes emotive-based targeting at the page level and real-time bidding—at scale and without cookies—to achieve superior results and insights for brands and advertisers. 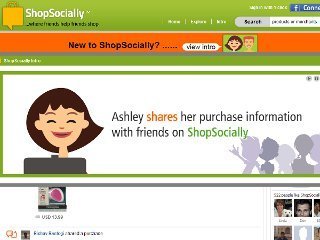 ShopSocially raises $1.1M in Series A