Sometimes the most unlikely pairings make the best end product. Like caffeinated bacon or scary clowns. So, it should be no surprise that in the digital world, odd couples come together in order to make something new, unusual and hopefully beneficial.

American Express and Zynga announced Wednesday that they have teamed up to provide customers with Membership Rewards points, a new American Express cardholder benefit. Players can now use their points to pay for limited edition virtual goods in Zynga’s games. Users are also able to buy gift cards for the games as well.

Points are earned when the credit card owner spends a dollar, meaning that the $50 gift card is a reward for about $5000 in real-world spending.  On the bright side, the Zynga game cards can be used for multiple Zynga games including: FarmVille, FrontierVille, PetVille, YoVille, Treasure Isle and Café World.

Items available only to American Express cardholders include FarmVille animals, manors and windmills, Café World fountains with the American Express logo on them, and YoVille robots. Users can find a full list of goodies on the Members Rewards site. Rewards currently start at 200 points for a $2 gift card. The most expensive item, a $50 gift card, will set you back 5000 points.

These items, however, are only the tip of the iceberg, as 20 more items are set to be released on December 6. The items available on December 6th will include the FrontierVille Fancy Gold Hot Tub, Golden Retriever and Fancy Gold Fountain. Cardholders will also be able to get cards for specific Zynga games on that date, like FarmVille, FrontierVille, YoVille, and Café World.

San Francisco-based Zynga, which was founded in 2007, has made several deals with other companies for special items of landscaping in the recent past. Earlier this month Zynga teamed up with animation studio Dreamworks to create a "Mega-Farm," to promote the feature film, Megamind. That promotion allowed users to get a "Mega-Grow" formula that instantly grows crops, as well as giving the players a collectible decorative item. In October, Zynga made a deal with McDonalds. Users who visited the branded farm got a FarmVille McCafe Consumable item, which allowed them to move around their farms at double speed.

Zynga has also created special items for charity. In January of this year, Zynga created a special item to raise funds for Haiti, which eventually raised $1.5 million for the cause.

Zynga was not available for comment at the time of the writing of this article. 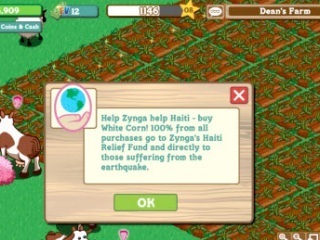 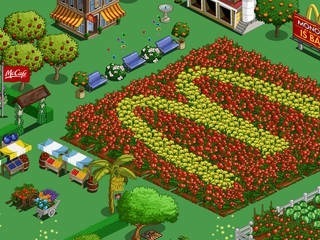