In advance of CEO Mark Zuckerberg’s conversation at the Web 2.0 Summit in San Francisco this Tuesday, Facebook will be in the city Monday morning hosting a special invite-only event. Only a few hours remain until our impatient heads are put at ease, but until then, the rumor mill is in full swing.

The most popular and most newsworthy story going around is that Facebook is officially taking the wraps off Project Titan, the company’s “Gmail killer.”

And, besides all the unnamed sources, here’s the best evidence for that: mail.facebook.com.

Clicking that takes you to what looks like a splash page for a Facebook email login connected to Microsoft Exchange. If Facebook is really revamping its terribly crippled private messaging system by launching a full-fledged email service, this is the first perceptible sign.

Microsoft’s decision three years ago to purchase a $240 million equity stake in Facebook is starting to look like a really good idea now.

A month ago, Microsoft announced that Bing would be implementing deeper integration with Facebook data such as information shared by friends and network data, revealing more intimate ties between the two tech behemoths. If anything has the chance to take out one of the most widely used and enjoyed email clients, Gmail, then its a joint application created by Facebook and Microsoft.

The big question is how a Facebook-curated Webmail client could be very useful or even make sense when most people use the social site for limited networks of people they actually know. Email is different. It's designed to be something pretty much open to anyone on the Web (minus spambots) so that anyone who has your email can contact you. While you may want to hear from a work colleague through email, for example, you don't necessarily want that right next to your personal messages on Facebook. To create a "Gmail killer," Facebook will be treading a fine line.

On the other hand, when was the last time any gadget or service dubbed “killer” of another established gadget or service actually succeeded in the killing? It’s too much hype, sure enough, but it’s also just plain difficult to unseat a reigning player.

Google has been trying so hard to “kill” Facebook with new social platforms, but all have fallen flat on their faces. The latest, Google Buzz, was a complete bust. The upcoming Google Me may fare just as well. Flipping the tables, Microsoft has unsuccessfully attempted to “kill” Google’s search dominance for years. Bing might be doing the best, but it’s still doing very little to chip away at Google’s clear majority of the search market.

Despite all that, of course, sometimes even the most widely accepted rumor is just flat-out wrong. A little over a month ago, Facebook held a similar invite-only event and rumors swirled that a dramatic site redesign--something as drastic as New Twitter--was on the way. While it’s true that the company had been tweaking chat windows a bit, the actual announcement ended up being about the relaunch of Groups, among other things.

We will be providing coverage of the Facebook event. 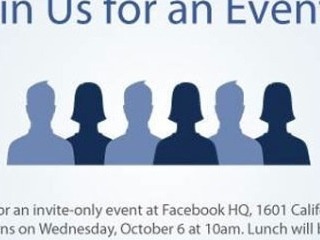