The Social Network, a David Fincher-directed film about the dramatic founding of Facebook, opened at #1 its debut weekend, reeling in an estimated $23 million from thousands of theaters across the United States.

But try not to let Mark Zuckerberg know. The Facebook co-founder and CEO has stated that the movie is more fiction than fact, something that is pretty much the consensus in the tech community.

None of that really matters to Hollywood, though. What matters is making a movie with just enough of the right factors to attract an audience as big and bound to return to the box office as the 500 million people that Facebook counts as members of the largest social site in the world.

A main character (Sean Parker, early Facebook advisor and its first president) played by a late 90’s boy band heartthrob and 00’s pop sensation Justin Timberlake? Check. Sex-starved girls adding just enough fluff to every other scene? Check. A trailer reminding us of everyone's favorite social networking obsession to the tune of an early 90’s chart-topper that probably every age demographic can sing along to? Check. Soundtrack by aged tech-savvy industrial rock god? Check plus.

Trent Reznor of Nine Inch Nails fame, with fellow composer and producer Atticus Ross, concocted a dark, weary hour of soundscapes to color the two-hour film. Some will recall that Reznor is an outspoken proponent of emerging technologies, especially social-based networks and services like torrent sites (even the illegal ones), as a means of directly connecting the musician with the fan and bypassing the bureaucracy-riddled music industry.

I wouldn’t be surprised if Fincher and the film’s production team had specifically selected Reznor not only because he’s knowledgeable about emerging Internet services, but also to attract his tech-obsessed fan base.

Apparently, however, the film is turning out to be more than just the sum of its easy-to-parody parts.

On Rotten Tomatoes, The Social Network has earned an average 9.1/10 from 175 critics and 81% of 27,000 users said they liked it. Similarly, Metacritic says the movie has garnered "Universal acclaim" from both critics (9.7/10) and users (9.0/10). With prominent critics already comparing Fincher's film to The Godfather and Citizen Kane, The Social Network is already on its way to winning an Oscar for "movie of the year."

Let us know in the comments what you thought of the movie. Any realistic glimpses into the real life of startup culture? 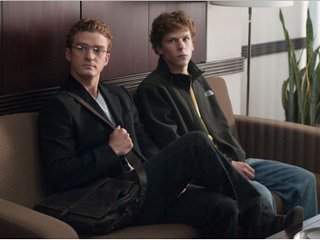