Is the iPad cannibalizing laptop sales?

A comparison of the different device demographics

Last week a bit of a frenzy was whipped up when Morgan Stanley researcher Katy Huberty released a report that showed tanking notebook sales, for which Apple’s iPad was blamed.  The report went hand-in-hand with a Tuesday comment from Best Buy CEO Brian Dunn, claiming that the iPad has cannibalized notebook sales by as much as 50%.

But a Monday morning blog post from NPD vice president of industry analysis Stephen Baker calls the claims the “height of hysteria and speculation,” adding “Windows PC sales, especially notebooks, have been much weaker than in the past few months, likely as much to do with the ebbing of the Windows 7 tidal wave and consumer reaction to the lack of price deals in the market this year as it has to do with iPads or back-to-school.”

“The reports of the demise of these devices are grossly exaggerated.  While they were fueled in part by a comment in The Wall Street Journal that was attributed to me, they are not an accurate depiction of what we’re currently seeing. In fact, we see some shifts in consumption patterns, with tablet sales being an incremental opportunity.”

Notebooks weren’t alone in Katy Huberty’s list of victims.  Also on the list were netbooks and even the iPod Touch.

But anyone with halfway decent critical thinking skills knows that it’s flawed logic to assume that because iPad sales have gone up and notebook sales have gone down, there is a causal link between the two.  First of all, as NPD’s Stephen Baker’s blog post points out, a number of different factors must be taken account when considering consumer behavior.

But equally important, I think, is the fact that these devices do different things and appeal to different people.  Thus, it would be a mistake to just lump all non-iPad devices together and make the blanket statement that if iPad’s sales go up, it will be at the direct expense of those other devices.  The iPad is a cool new gadget but it isn’t the end-all-be-all of devices.  So it might be helpful to do a quick compare-and-contrast of the different devices and their demographics.

According to a survey conducted by the NPD Group, those most likely to be interested in purchasing the iPad are current Apple customers with annual incomes over $100,000.  While consumers between the ages of 18 and 34 showed interest in the iPad, 90% said that they were not likely to buy an iPad in the next six months.

In accordance with this data, Yahoo! found that among Yahoo! network users, those who purchased were more likely to be 34- to 44-year-old men (male iPad users outnumber female users two to one).  Those who were among the first to buy an iPad were 94% more likely to be “affluent consumers with solid wealth and strong incomes than typical U.S. Yahoo! users.”

“The most interested potential iPad customers see it primarily as a music device, or for its internet access capabilities,” said Baker, of NPD.  “Considering what people are planning to use the iPad for, it’s not hard to understand why people who have these capabilities on other devices, such as the iPod Touch or a notebook/netbook, may not want to spend $500 or more on a similar device.  This points to the need for Apple to close the content deals that focus the iPad on what is likely to be its best long-range value proposition around high quality media consumption.”

Indeed, I have heard more than one 19-year-old iPhone user refer to the iPad as a "lamer version of the iPod Touch.”

The device that were said to be faring the worst under the iPad’s cruel reign of terror was the netbook, but while netbooks and iPads share some similarities, the people who buy netbooks are not the same people who buy iPads.

While the iPad appeals more to the 34-44-year-old crowd with a $100K+ income, netbook users are more likely to be looking for a bargain.  Data from Notebookreview.com found that consumers who bought netbooks did so because they were looking for a computer device that cost less than what they paid for their current computer.  While the average netbook is priced between $200 and $300, the lowest price of the iPad is $500.  If the netbook’s success is almost entirely due to the fact that it’s cheap, those netbook consumers are not likely to suddenly cross over to the higher-priced iPad, which costs as much as a notebook.

Some other interesting facts about netbook users: netbook users tend to be older, the vast majority (66%) being over the age of 45, and while most surveyed netbook users do not consider their netbook to be a replacement for their primary computer device, the netbook has a high rate of returns due to customer confusion over how a netbook differs from a notebook.  According to NPD research, 60% of surveyed netbook buyers thought that the netbook was just a small laptop, which is why 42% were consequently disappointed with its performance.

Said Steven Baker: “We need to make sure consumers are buying a PC intended for what they plan to do with it. There is a serious risk of cannibalization in the notebook market that could cause a real threat to netbooks’ success. Retailers and manufacturers can't put too much emphasis on PC-like capabilities and general features that could convince consumers that a netbook is a replacement for a notebook.”

In other words, people need to be aware that when purchasing a netbook, they’re not buying a real laptop, but a lame laptop doppelganger.

And what about the iPod Touch, which Huberty’s report also warned was in danger of being cannibalized?  According to AdMob’s research, fully 65% of iPod Touch users are under the age of 17, compared to 13% for the iPhone.  Of all iPod Touch users, 78% are under the age of 25.  This makes perfect sense, considering the iPod Touch is relatively inexpensive and doesn’t come with a hefty phone bill, but still allows users to chat and access music.  Not to make any sweeping generalizations, but the under 25-crowd is cheap and inattentive.  They didn't buy the iPod Touch so they could read the newspaper or browse the Web.  They bought it so they can download cool apps, stay connected to their friends, and listen to music.

So how do all of these groups compare to the average laptop consumer?  These days, just about everyone owns a laptop, so it’s hard to pin down one group, but it’s safe to say that there are things you can do with a laptop that you just can’t do with an iPad, netbook, or iPod Touch.  While iPads have a lot of great features, students aren’t likely to use the iPad to write up a 20-page essay.  Nor are iPads all that convenient for spreadsheets or business reports.  The netbook and the iPod Touch also fail to offer all of the same uses of the laptop: the netbook is too small to work on for very long and doesn't have the same kind of power and convenience, while the iPod Touch is less for Web browsing and emailing as it is for music and friends (which is why I think even if the iPad came down in price by a couple hundred dollars, it would not likely take over iPod Touch sales).

So while there may be the odd person here or there who has the income to spend on a computer device that isn’t necessary or specifically functional, and thus might be inclined to purchase an iPad instead of a laptop, this is unlikely to translate to cannibalized laptop sales. 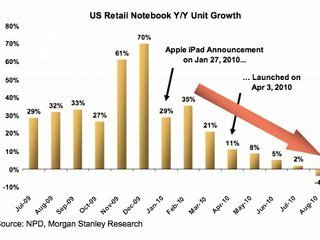 Why Netbooks will fail, and mobile will win!