You cannot escape the looming shadow of your long-abandoned cardio routine.  It will haunt you.  And now, a particularly cruel and vindictive new app by Nike makes it impossible to even fool yourself into thinking you ran five miles when you know that you walked half of it, which—let’s be honest—is the only reason that half of us can make it onto the treadmill in the first place.

The app became available Monday exclusively for the iPod Touch and the iPhone 3GS and 4GS, and uses the devices’ GPS and accelerometer to give the user accurate feedback, including calories burned, pace and distance, as well as where the runner slowed down and sped up.  It also visually maps out the runner’s route on Google Maps and allows the user to see how far he or she has run by tapping on the map.

The app can be used for both indoor and outdoor runs, whether on the pavement or on a treadmill, and even in areas where your device can’t get a GPS signal.  (Your cardio routine knows where you’re hiding.)  Several of the app’s features are also worth mentioning, particularly the voice feedback feature, which provides the runner with motivational messages from athletes and celebrities.

The “Challenge Me” feature uses information from a runner’s previous runs to calculate a new goal, typically in increments of five percent, but users have the option of customizing and increasing the goal if they are feeling particularly masochistic.

But all of that self-punishment is not without its rewards.  Nike found that consumers respond well to vocal motivation when they do that little extra sprint, so the company developed the “’Attaboy” athlete message, which congratulates the runner when he or she goes further or runs faster, much like a personal trainer.

Music is also very important, so Nike also integrated the PowerSongs feature that it had developed for previous apps, which allows the runner to select a playlist of specific songs for different types of runs.

And like anyone who has tried to lose that Christmas weight knows, the best weight-loss motivation is a network of friends cheering you on (a euphemism for peer-pressure).  So the app comes with social-sharing capabilities.  By syncing their device with NikePlus.com, users can post their runs to their online profiles and can share runs with friends on Twitter and Facebook.

Additionally, runners on NikePlus.com can challenge other runners in any location to a virtual race—each runner runs his or her own route and then can find out who won on the Web site.  NikePlus.com also offers a music section where users can download mixes used by athletes and celebrities.

Currently, the app is only available in English and costs $1.99 to buy.  The company was not available to comment on when the app would be available for other devices, like Blackberry and Android. 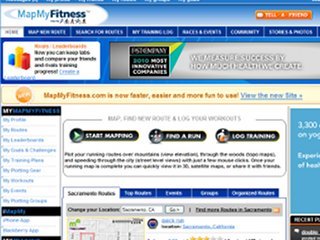