Twitter is suddenly more all over the news than usual. So what’s all buzz?

Turns out, lot’s of things.

First, let’s start with the big event: today was the first day of Twitter’s inaugural developers’ conference called Chirp. This is a gathering of just under 100 geeks at San Francisco’s Palace of Fine Arts who build applications that rely on Twitter feeds (or APIs) to provide a Twitter-related service to end-users (that would be you and me.) Company co-Founder and CEO, Evan Williams said that developers using the Twitter API make about three billion calls a day into the service.

These applications make it easier for individuals and businesses to, for instance, send tweets from their desktops or mobile devices across multiple accounts (Seesmic or TweetDeck), or to send pictures via Twitter (TwitPic), or to analyze how well you or your brand is doing in the Twitterverse. 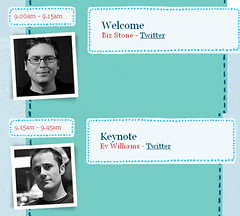 nearly 106 million registered users and adds about 300,000 new users per day worldwide. So, that’s a lot. What’s really notable is that about 75 percent of Twitter’s traffic is from outside Twitter.com – that is, all those applications I mentioned above are driving the lion’s share of tweets that are broadcast around the world every day. The other big number is that Twitter handles about 19 billion search queries per month either on its own site or via the API – which makes them second only to Google in total search queries per month.

That takes us to the third thing: revenue. Since it broadcast its first tweet in March, 2006 everyone has wondered one thing: how will Twitter make money? Four years later, they’ve got an answer. Promoted Tweets.

According to Twitter COO, Dick Costolo, Promoted Tweets will be a system whereby businesses can bid to promote their own tweets into top-of-stream conversations around particular topics. For instance, say you’re Paramount Pictures and you’re promoting a new movie with opening night parties in cities around the U.S. So you blast out tweets saying “Find an opening night party at a theater near you.” Today, you send that tweet out and it quickly becomes buried under all the tweets that follow it. With Promoted Tweets, each time someone includes your keyword – say, the movie’s title, or the name of its principal star – your tweet will quickly follow-on that tweet to the same group of followers. If Paramount’s tweet gets re-tweeted, clicked-on or favorited, such actions will somehow accrue to the benefit of the advertiser (it isn’t exactly clear how, but I’m guessing its akin to Google’s performance-based quality score for ads in its AdWords system).

Pretty cool. Especially for those of us in the advertising and marketing world looking for ways to appropriately engage in the twitterverse without looking pushy or like we’re trying to interrupt something. Bidding on search keywords became Google’s cash cow; it’s clear Twitter is hoping that bidding on keywords in tweets could become a big cash generator for them.

Speaking of money, the fourth big thing is that Twitter is now developing features and functions within its own sphere that will compete directly with some of the applications built by the very third-party developers Twitter is hosting this week at Chirp. As you might imagine, this is profoundly anxiety-producing for start-ups who’ve built their whole business model around the Twitter API and features that heretofore were absent from the core Twitter offering. So there are more than a few geeks sweating over this. Still, Twitter’s new monetization scheme is something they’re willing to share with Twitter developers who build Promoted Tweets into their applications – in fact, they’ve proposed a generous 50 / 50 split for advertising revenue. So, bad news and good news for developers.

Which leads to the last big announcements relating to Twitter this week:

Twitter’s impact on the social and cultural landscape worldwide is, presently, incalculable, and it's clear the young company isn’t content to rest on its laurels. These changes, together with the exciting new apps still yet to emerge from its ecosystem of developers, portends more exciting announcements to come.