Boxee payments system on the way

Boxee continues to move forward.  On Wednesday, the startup announced a payments platform for its quickly growing, free multimedia application.

Similar to software like iTunes and Windows Media Player, Boxee can playback all your media on your computer, whether it be MP3's, video files, or photos.  But where Boxee stands out from the other players is it's open source and has the neat option to connect to online media sites like Netflix, Pandora, YouTube and others.  So your're not limited to your local library.  On top of that, it has an open API allowing developers to create apps for Boxee which can be added to access other content online.

The payments platform will be an opportunity to create an interesting ecosystem around Boxee.  Content creators can start charging for the videos they produce, and Boxee app developers can start charging for their apps as well.  Boxee said in its blog, "The content owners will be able to package and price as they wish, including pay-per-view and subscription. Content partners will have the flexibility to decide what they make available, whether it’s premium content, content from their existing library, or extras that will never make it “on air”.

Boxee will take a cut of the transactions, similar to other app store models.  The startup said the price is still to-be-determined but should be, "lower than the 30% charged by many app stores."

An argument could be made that since Boxee's userbase consists of lots of tech-savvy college kids, it can be hard to imagine them shelling out cash to watch content online.  With illegal torrents of tv shows and movies available to download for free, why would they ever pay for this premium content?  Avner Ronen, CEO of Boxee commented on his blog saying that the most common use of Boxee is, "streaming videos and music from services like Netflix, Pandora, YouTube, MLB, Revision3, Digg, etc.  We believe the best way for content owners to fight piracy is to offer their content online in an easy-to-use, compelling and affordable way. when TV networks started streaming their shows online the piracy of their shows started declining in a big way."

The application is for a new generation, a generation people who feel the Internet is vital to them.  "This generation has turned to the Internet for their entertainment needs as well," said Ronen.

At CES this year, Boxee and DLink announced they would be selling a set top box which will bring the whole Boxee experience to televisions.  You can already hook Boxee up to your TV with your computer by the way.  The Box functions exactly like the Boxee software, comes with a neat remote, and HD connectors.  Part of the idea of this new micro-transaction model is to enable people to download and pay for content with one click on their Boxee boxes which will retail for about $200 and be available in the first half of this year.

In the end, the move by Boxee shows it's several steps ahead of Apple TV.  Boxee has open source software, an API, the ability to stream from all over the Web, a focus on user generated content and a device focused on the social Web.  Fred Wilson, a VC from Union Square Ventures which invested in Boxee put it best, "I like to think of Boxee as, "Android for TVs." 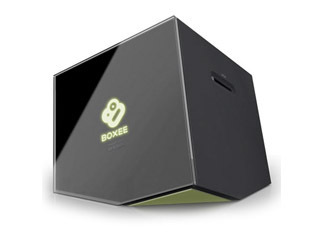 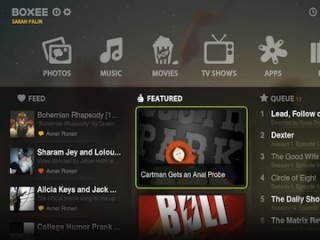