Back in the days before the Web, when researching a product many turned to magazines like Consumer Reports to get the information they needed before making a purchase.  Things are quite different today with the rise of the Internet.  Instead of paying for reports, we can find out what people are saying about products on retail sites by checking a standard feature now - the customer review boxes.

At the same time, with the rise of Twitter, people can do a quick search and find out what everyone is saying in regards to a product in real-time.  Unfortunately, with so many places to go and read this endless amount of content, it's hard and tedious to know where to start.

This is where Burlingame, Ca.-based Wize comes into the picture.  The startup, which has been around for several years now, on Wednesday announced new features for consumers to help improve the process of researching products.

Since it's first generation launch back in 2007, Wize has been working on creating a search engine which understands what people are saying about products online.  It aggregates customer reviews from sites like BestBuy.com, HomeDepot.com, PhotoAlley.com and thousands of others.  Its engine analyzes these reviews and presents them as a single result so users don't have to scan through multiple sites for this information.  It says it has collected over 24 million recommendations for more than 1.1 million products.  The difference between Wize and one well-known competitor Epinions, lies in the technology going on behind the scenes.

With today's revised launch, Wize has integrated semantic search technologies to try and create better product review results, by understanding exactly what people are saying about those iPhones are toaster ovens, etc.  Tom Patterson, CEO of Wize.com told us, "We literally took all this review content across the Web, and analyzed it with our proprietary semantic technology to understand what people are ecstatic or upset about.  We want to give people the ability to shop by use or need."

Wize isn't trying to focus on the tech savvy person who knows exactly what kind of specs they are looking for in a digital camera, but instead, focused on the person who says, "I need a camera to take great pictures at my daughter's soccer game," of course based on user reviews as opposed to a salesperson's pitch.  Wize announced with today's launch it's also tapping into Twitter to find reviews of products based on people's Tweets.

At the same time as wanting to be a destination for users to conduct their retail research, Wize has also focused on building killer technology for SEO, especially on Google.  For example, if I do a Google search of "best camera for action shots," the top Google result is actually a page which takes users to a nice set of aggregated reviews from Wize.

As for business plan, Wize is running a lead gen business, taking a fee when users decide to actually go to the retail site and purchase a Wize recommended product.  Some of those retail sites include Buy.com, Amazon.com and TigerDirect, among many others.  Patterson told us Wize is working with an affiliate program that includes many well-known retailers.

The startup received $4 million back in 2007 from Bessemer Venture Partners and Mayfield Fund, and last year received $988K from Mayfield Fund.  It's currently running a lean business of 8 people and also announced it has added on Jeffrey Glueck to its board of directors.  Glueck was previously CMO of Travelocity.   Patterson shared that Wize's current focus right now is, "getting to profitability."

And it could happen soon - Wize has seen signficant growth in the past year.  Patterson shared it's up a couple hundred percent from last year and looking like it will hit a million by the end of this year. 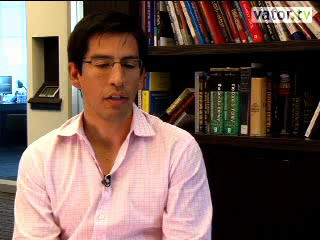