LinkedIn founder and CEO shares his lessons and advice to entrepreneurs

At TiEcon held in Santa Clara, Calif. earlier this month, I didn't stand when LinkedIn founder and CEO Reid Hoffman's interviewer asked for those in the audience born outside the United States to stand, even though I was born in the Philippines. Given the vast majority of the audience stood up, I figured the point was made. That is that innovation relies heavily on U.S. transplants. And, that the current immigration laws are impeding the ability of startups to thrive. Hoffman is a big proponent of changing the immigration laws.

I saw Hoffman after his keynote. You may have caught the first part of our interview, in which he talks about the business of LinkedIn.

In this segment, Hoffman shares his view on the state of entrepreneurship and advice he'd give to entrepreneurs.

One takeaway piece of advice to entrepreneurs is this: "Make sure that as you're gathering resources, amd you don't view it as, 'This is the way I prove myself. View it as a learning path by which you improve because certain amount of companies will fail but your network persists, and you can go from this one to the next one and win the next game.'"

Hoffman also talks about what he learned at his firs networking company, SocialNet, and what he took away that helped him start LinkedIn. 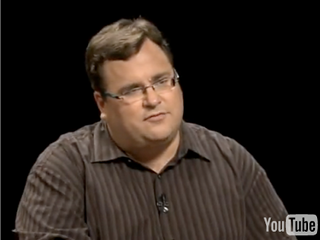