Mobile advertising is as one Advertising Age writer put it: This great white whale that is forever on the horizon but perpetually out of reach.

But thanks to the proliferation of the iPhone, and other smart phones, and a surge in social networking usage on a mobile device, the promise of mobile marketing may be closer than we think. Recent reports showed that mobile advertising should grow 36% to $229 million in 2009, according to Magna. The Kelsey Group estimates that mobile advertising will grow to $3.1 billion in five years, or by 2013. That's a compounded annual growth rate of 81% annually from $160 mln in 2008. And, UK mobile advertising spending doubled in 2008 to a higher than expected $44 million, according to IAB and PricewaterhouseCoopers (PwC). Mobile display ads accounted for 49.8 percent vs. 50.2% for paid search.

Ron Conway, who's invested in roughly 130 startups, including Facebook, Twitter and Digg, in the last five years, said he's very bullish on the mobile sector. One way to capitalize on the growth is to invest in Apple, said. He also said that mobile advertising network company, AdMob, might be a good IPO candidate once the IPO market opens up in a year.

Conway also reveals a surprising tidbit - He's not a Facebook or Twitter user, even though he's invested in both.

I interviewed Conway on stage at the EconSM conference in San Francisco recently. The conference theme was mainly about mobile advertising. Here's an edited version of the second part of that interview.

RC: Facebook has been active on the mobile platform and has been on the forefront of mobile apps for the last four years. They're a real leader.

RC: I use none of the above. I invest and add value. I don't spend a lot of time using these services.

BF: Let's broaden this out. VC investments in the mobile sector dropped 58% in the first quarter and it's the lowest level in 12 years, in terms of the capital invested. What's your outlook in investment on the mobile startups?

RC: Let's talk about the revenue that is going to be generated from iPhone apps. These iPhone apps are all digital goods that are very low cost of sales. Why wouldn't you buy Apple stock? There's 30,000 iPhone apps. It's a whole new economy of mobile phone apps that are springing up from creative entrepreneurs. The iPhone ecosystem is a multi-billion dollar industry. Admob (one of our companies), which serves up ads to the mobile community, is a company that might be the pioneer IPO. They have significant sales that are way ahead of Twitter.

BF: They have a huge emphasis on iPhones?

RC: Right. Also, the new Palm phone is coming this summer that could also be very disruptive. The mobile industry is huge and new people are coming into it.

BF: Let's talk about your investments. Ron has invested in 500 in total but 133 current over the last 15 years. Eight percent are mobile. Why have you made these investments?

RC: We try to invest in companies in the mobile space that are not as reliant on the carriers in order to grow and be as successful. There's going to be a lot of mobile apps that are going to become huge. We're in a company called iMob, which is building iPhone apps in the gaming sector, and that's a huge growth area that is not carrier dependent.

BF: Would you be interested in location-based and geo-targeting services or more entertainment type apps such as Smule?

RC: Right now I'm more interested in the entertainment sector. But in time, with the location-based sector, that's going to be huge growth. But you have to be careful of the dominant players that are in that sector now like Google who are doing a very good job now.

BF: You brought up a point that mobile initiatives are very capital intensive. What should angel investors look for in a mobile startup?

RC: We try to invest companies in the mobile sector that aren't as capital intensive. I don't focus on hardware. I focus on software.

BF: So what would it take or a mobile startup to get funded by you? Besides being in software?

RC: I invest in great teams. I look at the entrepreneur first to focus on the character and the chemistry I have with him. Then I look at the idea as second. That's because when an entrepreneur starts a company, the idea morphs radically. It probably morphs a few 100% from the company you thought you were investing in. I focus on the character and realize the company will morph.

BF: Which startup did you invest in that you really believed in and it totally just blew up?

RC: Napster. Napster could have been iTunes but people were not willing to cooperate back then so mistakes were made. But if mistakes were not made, the music industry would still be thriving today and not lashing around the way they are today.

BF: Was it the team or the industry?

RC: The industry and the timing and too many lawyers getting in the way.

BF: What startup did you invest in but didn't really believe in and then it totally surprised you?

RC: The startup in the surprise category is Digg.com. I invested with Kevin Rose. That was a service that I thought would grow. I think Kevin's one of the best entrepreneurs out there, as far as his entrepreneurial spirit and leadership. So, I thought it would grow, but at a lot slower rate than it did. After a year, this company had huge metrics.

BF: What's the future of Digg? Will that be a stand-alone business? Could that be part of a media company?

RC: I think that Digg is growing at a good enough rate. When we come out of the recession here, they can become an IPO as well.

BF: When do you expect the IPO market open up?

RC: I think we are at least one year away but I'm hoping we are six months from the M&A market opening up again. 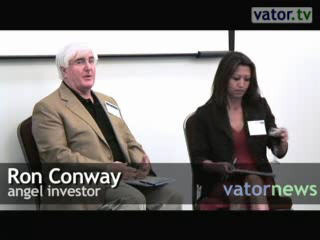