Why CEOs and founders need to be salesmen and learn how to sell, sell, sell

In this segment of Lessons Learned, Bambi Francisco sit downs with serial entrepreneur David Sifry, founder and CEO of Offbeat Guides. Sifry also founded four other startups, including Technorati, which he was at the helm of for five years.

BF: David, you've started five companies, and in 17 years, you've raised $110 million in venture financing. What are your three pieces of advice to entrepreneurs?

DS: Number 1 is sell, sell, sell. As an entrepreneur, as a CEO, even as a founder of a company, you've always got to be selling, closing, and figuring out how to make your product better, smarter, faster, and how to sell it more easily to people. It's the lifeblood of the company. Number 2 is create a conscious culture in your company. Companies get born and cultures happen. When people interact in any environment, you're going to start having a culture. Sit down especially when you're young and ask yourself who you want to be and what are your values? For example, when I got Technorati off the ground, but before I hired any employees, I really took a week to actually think about how I wanted the company to reflect and be about. So I decided, in the reflective of our hires, what I really wanted Technorati to be about and it is a place for service to our users and to something that's bigger than ourselves. Your culture is whatever you want it to be. The stronger you make that culture, the more likely it is that you will actually succeed in that vision.The third thing is build your passion by doing the thing you absolutely love to do. Figure out a way to make money doing it which is very important. But it's not about making the profit as the reason for being alive. I think it's easy to look at Thomas Friedman, and capitalists who say, "The soul purpose of the corporation is to make a profit."I think that is like putting the cart before the horse. Of course, you have to have profit which is just like oxygen because without it, you're going to die. If you think you are not here on this planet just to breathe, follow that passion, build it, and even if you fail, chances are you will actually have a great time trying to make it work.

BF: We're here at the Innovate!Europe conference, the theme is fail and be alright with that. On the panel with Chris Shipley, you talked about the mistakes you've made in the past 17 years. One of the mistakes was about choosing the right CEO. How would you have done it and who would you have hired?

DS: We actually made a bunch of mistakes. We as a founding team ended up being pressured about where the business is going, how many customers we had, and how little experience we've had running a venture backed company to provide and to bring in "professional management." I am not saying bringing in people to manage is not useful but we ended up picking the wrong person and we didn't do enough diligence by checking references. We trusted our guts to do the right thing and it ended up being entirely the wrong person. And then making that change and trying to heal that damage was a difficult proposition.

BF: So how do you advise someone to find the right CEO? Do you spend a year with that person?

DS: When I came into Technorati as a first time CEO, I said that I wanted to do the job but also said that if I couldn't do the job anymore and if the company outgrows me, or if I can't do it for some reason, I will gladly step aside. And, for five years I ran the company and built it up with 10 million unique visitors, 60 million page views, and really built it up. But when we hit a plateau, I was realizing that we needed to build a blog ad network and add new blood. I went to the board and for nine months we researched, interviewed people, saw many fantastic candidates, and in the end, we picked Richard Jalichandra because he had the technical experience - working at IGN, Fox - a terrific resume, and really understood the culture of what we've been trying to build at Technorati and I've been so happy ever since.

DS: There are loads of things I would have done differently. So much of the angst that we had was that we really didn't understand how to make money. Frankly, I'm not sure if anyone did back in 2002/2003. So we iterated and tried to figure out where is the money. Is it search advertising? Is it building PR campaigns? Is it building tool sets? Is it selling directly to bloggers? We didn't know. I would have slowed down a little bit to building new features and adding more to the site and I would have actually focused on what exactly we were going to sell and what kind of business model we were going to focus on. So when I started Offbeat Guides, the business model was that we sell books that have real value in them. The nice thing about this business model is that my mother even understands it.

BF: Fortunately, investors even understand and you probably don't even need them.

DS: We do have some investors who are terrific. But this is the nice thing about building an on-demand business where people pay you for it.

BF: You mentioned on the panel that the best investment money is when your customers pay you for it. 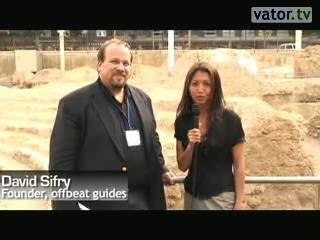