Should MySpace.com become music only?

Back in September 2006, an article released by the New York Times spoke about how MySpace was planning to challenge the perception of the digital music industry moguls, MySpace in fact were the first company to think about letting users download major record label content DRM free, of course the first major music download store to actually implement a widespread DRM free download service was Apple’s iTunes store in January 2009.

It is in part from recent news coming from AP and Techcrunch.com that really got me thinking about how Myspace Music is perhaps the saving grace of the failed social network Myspace.com. The one particular thing I noted was that iTunes, the predominant and most used music download service on the market is having a slight decline in it’s sales of songs in the iTunes stores based on recent news from AppleInsider.com reporting that “the 33 songs on the iTunes top 100 seller list that saw their price increase from 99 cents to $1.25 sold an average of 12.5 fewer units last week than the week before”.

Could it be suggested that musicians and fans alike are finding the new change a little too overbearing, has the iTunes bandwagon lost a valuable wheel, contributing heavily to it’s sales margins. Myspace on the other hand, which maybe has been slightly troubled by lawsuits, executive departures and slightly questionable joint ventures has delivered a strong user base directly to bands and independent artists.

It should be said that the point that was correctly made by Arrington of Techcrunch.com about “artists having control over the look and feel of their Myspace profile” as opposed to Facebook’s same look fan page setup which cannot be altered from standard fan pages, is largely still true to this day.

As social network comparison would go between the major two social networks on the web, Facebook and Myspace, we can see that Myspace has taken the music side of things a lot more seriously then that of Facebook, partly because of it’s openly vocal community (35 million in total according to Techcrunch.com), who are a strong, empowered group of individuals who represent a much more defined group of music lovers.

I believe that Zuckerberg and the team feel a little pressured on which direction to take their social network music wise right now, and in fact the Facebook team have seemingly become more concerned with how much money an IPO could make them, then the social network being able to function and maintain it’s pace of growth. For me I have always seen quite a unique split between MySpace on the music side, and MySpace on the Social networking side, which has worked to their advantage fairly well, and has maintained a strong interest for the user to keep both personal and musical friends linked, but slightly separate to each other.

But what do you think, do you think I have perhaps jumped to conclusions a little assuming that all of Myspace’s problems will be saved if they do well with Myspace Music during 2009, would you agree with my concluding thought that Myspace should just be a music social network, and should ditch it’s “personal social networking” side of things?

Music Expand is a Marketing & PR service that works with musicartists, record labels, digital distributors, magazines, mediacompanies, and other forms of music & media to help them propeltheir business with extensive marketing strategies. Whether you're amusic artist that wants to reach megastar status or a music businessthat wants to drive tremendous traffic to your website, Music Expand ishere to help. With arrangements with the leading marketing distributionnetworks, we can place your press release, music contents, and more ata very affordable price. Music Expand also provides customizable solutions to best fit your needs and budget. 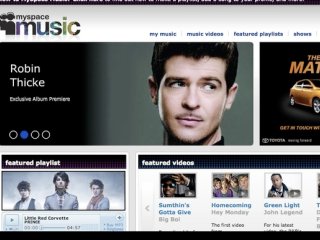