Betaworks confirms TweetDeck will be receiving $300,000 in seed financing

TweetDeck has secured $300,000 in seed financing led by Betaworks.  John Borthwick of Betaworks confirmed the information with VatorNews.

VatorNews, reported earlier this year, TweetDeck would be raising $500,000 for its desktop Twitter client.

This may seem like a small investment, but for being a one man team made up of founder and developer Iain Dodsworth, the hunk of cash may serve to help him get this popular item further down the road to success.

TweetDeck works as an application on your desktop which organizes all the nifty features of Twitter into clean and organized columns.  These are updated automatically and 'live'.  They are also stored.  For example you want to see updated tweets that happened overnight, they'll be saved there for you in the morning.

TweetDeck is offered as a free beta download but Dodsworth has been cited as saying he is interested in offering a 'Pro' version further down the line.  At this point there is no clearly defined business model for TweetDeck other than to, "make money." 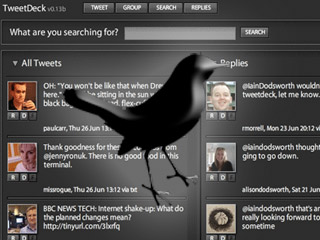