How times have changed.

On Tuesday, the world will be watching an historic event - the inauguration of Barack Obama as the 44th president of the United States. But the event isn't only historic because of who is being inaugurated, but it's historic in its unprecedented coverage and viewership.

The coverage is leaps and bounds far more ubiquitous and dynamic than in past years. As recent as the last U.S. presidential election when President Bush was inaugurated in 2005, Facebook was barely a year old, and still confined to Harvard students. YouTube was not even founded, until February 2005. Twitter was barely a side project until a year later.

For all we knew back in 2005, to Twitter meant to utter successive chirping sounds, Hulu meant a Chinese word for calabash and joost meant intoxicated.

Obviously, these words have new meaning. And, now they're part of the services that give us a 360% view of events - from all angles and all perspectives.

Today, everything you need to know about this historic event is at your fingertips. Of course, in four years, this will all change too.

But let's start with what we can expect from the Web and media coverage of this event.

On Wikipedia, the live encyclopedia that records events as though it were a news site, a profile page for Obama's inauguration has been established, with essentials, such as time and place. Who knew that you could get "future" event information from an encyclopedia?

Of course, news coverage isn't the same without Twitter these days. When I was a television journalist, we used to go out on the street and get "MOS" (Man on Street) soundbites. Now, you get those in spades on Twitter.

Twitter's coverage has already been quite active, with thousands of posts every couple minutes.

No longer are we confined to top-down coverage from network television, ABC, NBC, CBS, or 24-hour news coverage from CNN, though they're excellent at providing full-blown coverage. These news sites know that in order to deliver the best coverage, they have to incorporate and leverage Web 2.0 services.

While CBSNews has its "Countdown to 44" inauguration page, it also has a Twitter feed, called CBSNewsHotSheet. Clearly this profile was just created as there are only 54 followers.

While FoxNews is gearing up for the event with its inaugural destination, the media site knows it has to be where the audience is. You can also catch Fox live on Fox's Facebook profile, where Fox has attracted 70,000 friends.

CNN is also leveraging Facebook to deliver the coverage. On CNN, you can update your status and see status updates from your friends and other Facebook users on CNN.

Meanwhile, both FoxNews and CNN know that they can't just cover the event with their highly-paid anchors and reporters. They're also leveraging the audience and giving them a voice. On FoxNews, you can upload your photos or videos about breaking news on its uReport page.

On CNN, anyone can become an iReporter. CNN will be taking the pulse of society and capturing "Your view of history."

While YouTube seems to have been a part of political life and news coverage for years, this will be the first year that it has an official inauguration page as it was founded a month after the last inauguration day.

You can also watch the event on Joost, on its "Everything Obama" page.

For live events, forget C-Span, you can watch the event live on Hulu

Or, if you want a live experience with chat, go to Ustream's live coverage.

And for other crowd-sourcing information about the event, go to NowPublic. About 24 hours before the inauguration, NowPublic was a day behind in the crowd-sourcing department. But nonetheless, it was taking in posts.

How else is the Web capturing this event differently than the 2005 inauguration?

I think I got a lot covered, but here's the kitchen sink, just in case.

(Note: This story was updated. It was first published on Jan. 19) 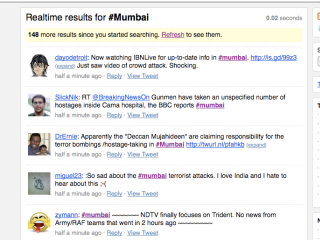