But it works differently than search

In fact, a recent comScore white paper that was presented last week at the Empirical Generalizations In Advertising Conference at the Wharton School is very enlightening. You can get a copy of the white paper by asking for it here.

comScore operates a panel of over 2mm internet users worldwide and they examined 139 banner ad campaigns and compared a test group that was exposed the the campaign versus a control group that were not exposed to the campaign but are similar in other important ways to the test group.

Specifically, they found the following:

The basic insight from the report is that display advertising does not normally result in an immediate click. That makes sense because the ad is not being presented in a moment of purchase intent, like a search ad is. But the ad does create interest in the product or service which is realized at some later date in the form of a site visit, a search query, and possibly on online or offline purchase.

Here are some charts from the report which illustrate the above findings:

The chart above shows that a display campaign significantly increases site visits for up to four weeks after the ad has been viewed.

And this chart above shows that search queries on the advertiser's brand or trademark increase significantly for up to four weeks after the display ad is viewed.

One of the most interesting findings is the following:

The impact of search ads alone on consumers’ buying behavior was found to be clearly greater than that of display ads alone. This is true both in terms of the ads’ impact on online buying as well as the impact on offline sales. This is not surprising because consumers responding to search ads are much more likely to be “in the market” for buying the advertised product. However, it must be remembered that the reach of display ads is typically much higher than that of search ads. For example, in the studies conducted by comScore, approximately 81% of the consumers who saw an ad received only a display ad, while a much lower 8% received only a search ad. When the lift factors are weighted by the reach of the ad, display ads typically emerge as being able to generate a higher total lift in sales.

Conventional wisdom says that media works best when multiple programs are used together, and we do indeed see clear synergies between search and display. Both in terms of the impact on buyer penetration and dollar sales (per thousand consumers exposed), it’s clear that the combination of search and display together is greater than the sum of the impact of display and search ads separately. The synergy is notable.

So this means that the best approach is a mix of display and search. That is what most marketers are doing and they should continue to do it even in the downturn. However, this study does not determine what the right price for display advertising is. Search is measurable by virtue of the cost per click and display is not. And if click thru isn't the right measure, then display has an issue. Not every campaign can be compared in a controlled test as comScore did in this study. But comScore could make their panel available to advertisers to measure performance of display campaigns. I am no longer involved with the company (I was on the board for almost 10 years), but I expect that they'll do something like that. And it will be a great help to the display market. Particularly in tough times when every ad dollar spent needs to count. 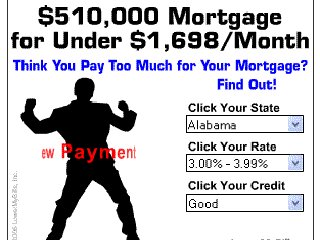