Internet businesses will march on in 2009, even if VC firms are on the sidelines

There has been a lot of very sagacious advice offered by Venture Capitalists and investors to their portfolio companies in the last week. I’ve read them all 3x. Dogster, Inc. is not VC-funded, and we have a negative burn rate (aka are profitable) by, I would credit, putting as much focus on multiple revenue streams as we had on growing a great service. We’ve always been a very risk adverse company, which I suspect in the next year will be reclassified as a quite sensible company. 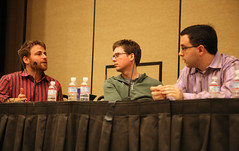 But for all the doom and gloom of the VC’s desperate to not keep their flock from getting culled like they did six years ago, the next couple of years will not be like 2002 and 2003. They may be for the VC firms that struggle to manage their overfunding and overvaluating tendencies of the last couple of years, but their retrenching into bunkers to save their fund’s value will not have nearly the affect on entrepreneurs and angels as it did earlier in the decade.

It’s no secret that Internet businesses can be started with no budgets and get themselves to profitability within a year or two. We did it during the ‘nuclear winter’ and so did Blogger, Flickr, Delicious, LiveJournal, HotorNot, Moveable Type, Wordpress, StumbleUpon, … need I go on? But more importantly, it’s happening right now. Dozens of similarly potent companies have launched in the last year. You’ve seen the iPhone App store right? The cash model is back and the landscape for digital products is an order of magnitude larger than in 2001. Then it was web and games. Now it’s web, games, phones, social apps, Tivo/DVR appliances, in-car appliances, hand-held games. For dog’s sake walkmen, phones, and VCRs (aka DVRs) are now Internet appliances. What’s next? Who’s going to make it? I don’t know but in two years we’ll all know.

And, as serial entrepreneur Shervin Pishevar so eloquently reminded us in his great entrepreneurial missive, the Horatio Alger spirit is no longer the American Way, it’s the Global Way. It’s not just the minds pouring out of American universities and offices, it’s the minds of the WHOLE world. Creativity is brimming in what we used to deride as Eastern Block countries. And we already know Europe, India, China, Russia, etc. have all reformed their economies to support, foster and expand environmentalism. Even if young Americans put their heads in the sand, there will be as many new Technology products released in the next two years than in the last six. 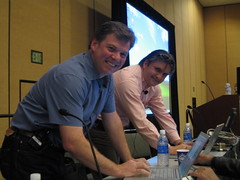 Then their are the angel investors who are very different than their fin de cielce cousins. Angels in 1999 were Dentist and Alumni Groups, Waste Management companies, mothers and fathers. There were very few ‘made-my-millions’ technologists helping the next generation as there are now. The current generation of angels and early investors, many of whom I’ve gotten to work with and know don’t do it by choice, they do it because they love it. They love the excitement, the discovery, the opportunity, the chase. They love working with entrepreneurs and helping develop their products. I can promise you some that quickly come to mind, Ester Dyson, Joi Ito, Josh Kopelman, Jeff Clavier, Brad Feld, Aydin Senkut, Reid Hoffman are not going to go to Switzerland or Kona to ride out the banking freeze. They would go crazy. Heck, they’ve probably moved more money into cash than they’d like and are seeking more places to put it. Even if some of the angels with funds saw those funds freeze up, I can promise you they would start investing as individuals again because they can’t not pass up on good opportunities. They know better. Wall Street and Sand Hill Road’s loss is their gain.

The next line of whining and fear the VCs are repeating is “but there will be no exits … M&A is closed and IPOs are over”. To that I say IPOs died in 2001 and the M&A market has been tepid at best for the last two years. I was talking with First Round Capital’s Rob Hayes the other night, who said “does anyone seriously think tech had a bubble problem anymore?” And then added more realism by saying ” We’ve gone the last 3 years with a slow exit markets, so it’s not like it will be any different next year.”

If there was ever time I would think the advice I and my partners have made for growing a sustainable value business would not land on deaf ears it’s now. To all entrepreneurs, now is a GREAT time to make something. Trust me new entrepreneurs, you’re better off making it on your own than risking it to VC growth requirements. Develop a great product and great people will find you to help. Expand that great product and companies will still want to partner with and buy you.

In the last month we’ve closed $250k in new deals and have received proposal requests from every major pet-related CPG company. (Mars, Purina, P&G, Clorox, etc.) It’s the banks and equity folks running for cover. People are buying iPhone Apps like they are the candy that they are. People will be playing games, and using the Internet more than ever. Home entertainment devices will penetrate the majority of American homes by the end of the decade. Wii’s will open up like the iPhone App store and everyone’s phone will have a web browser.

So heed all that VC advice: find revenue, watch costs, don’t expect easy outs; but now is definitely the right time to be making the next great thing. Just do in a way that it makes money from the get go, and you’ll guarantee your success no matter what happens.

Dave McClure has a great post about how to avoid the woes of others and stay focused on making great things. He’s right.

[Photo 1 by Laughing Squid of Stewart Butterfield (Flickr) Biz Stone (Xanga, Blogger, Twitter) and Joshua Schacter (Delicious) on a panel I led about Founders. Photo 2 by Dave McClure of Rob Hayes and Jeff Clavier on a panel I added entrepreneurial color too.]