Richard Rosenblatt on not giving up

The beauty of Vator's "Lessons Learned" series is that the advice entrepreneurs share never gets old. Here's a video of Richard Rosenblatt that I never published in the newsroom. But it's still relevant today, even though I took this back in Halloween of last year. In this video, Richard, who started his first company - an online shopping mall - back in 1994, right after graduating law school, shares his three pieces of advice to entrepreneurs.

As many readers may know, Richard has had a lot of success as an entrepreneur. He was the Chairman of MySpace, which he sold to News Corp for $580 million. And, he's the co-founder and CEO of Demand Media, which has been rapidly acquiring new media sites. Admittedly, Richard says he's had a lot of failures, including the time he tried to turn around DrKoop.com when he was 32-years-old. DrKoop was on its way to losing nearly $150 million the year Richard came along. Eventually, it went into bankruptcy.

With all these wins and losses, it's worth hearing what he has to say. "Everyone's going to tell you that your great idea is never going to work," he said. He points out the fact that there were many naysayers who discouraged him when he was running iMALL and MySpace. People didn't understand why anyone would be shopping online or spending time on social networks, he said. IMALL was sold to Excite in 1999, after Richard founded it five years earlier, and Intermix (which owned MySpace) was sold to News Corp in 2005.

"The first advice is - your dumb idea may actually be really smart," Richard said. "And, the fact that people don't get it, is actually a positive. If everybody got it, they'd already be doing it."

The second tip is don't give up. "It's so hard to be an entrepreneur," he said. "One day I feel like it’s going to be a success, and the next day I feel it’s going to fail. I always feel like I’m on either the brink of greatness or on the brink of complete failure, at all times." Richard's roller-coaster feelings are not dissimilar to what I hear from many entrepreneurs, including Chris Larsen, who founded E-Loan and Prosper, and Blake Krikorian, who founded Sling Media.

The third piece of advice is to surround yourself with great people.

(Editor's note: Richard is an investor in Vator.tv and is also on Vator.tv's advisory board.) 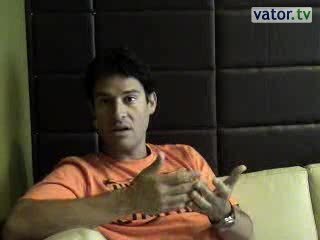 Richard Rosenblatt on demand in an interview with Bambi