Another PayPal mafia member jumps on board to ensure event management site's success.

Update: Stoppelman responded to a few questions. His answers are inline below.

Yelp CEO Jeremy Stoppelman is joining the board of advisors and investing an undisclosed amount in Eventbrite, the event management site (we use the service for our Vator events).

Stoppelman founded Yelp in 2004 after his stint as a VP at PayPal. He met Eventbrite CEO Kevin Hartz through the PayPal mafia, a group entrepreneurs that worked at the company and went on to become influential Silicon Valley leaders. "Been friendly for years," Stoppelman said of Hartz in an email to VatorNews, "I first got to know him through the PayPal network. We have a number of mutual friends and colleagues so we run into each other socially all the time." Other members of the mafia include investor Peter Thiel, the first investor in Facebook who is also an investor in Vator.tv; Chad Hurley, founder of YouTube; Elon Musk, founder of Tesla; LinkedIn founder Reid Hoffman and angel investor Dave McClure (who is also a judge in Vator's Splash competition).

It’s not hard to imagine why Eventbrite would want someone with Stoppelman’s pedigree on board, and his stake in the company probably comes with favorable terms. In addition to his success building a startup worth over $550 million, Stoppelman’s particular experience building local markets and attracting business from brick-and-mortar restaurants makes him a valuable asset for the similarly geographically-bound Eventbrite. We asked Stoppelman for a sample tip he might dish to Eventbrite. "Don't go a mile wide, but one inch deep," he says. "Figure out how to build depth in a single locale then step on the gas market-by-market."

Others investors and advisors include Michael and Xochi Birch, co-founders of Bebo, Joe Greenstein, founder of Flixster, and superangels Ron Conway and Jeff Clavier.

Earlier this month, TechCrunch reported that Eventbrite looked to be partnerting with Facebook (Thiel’s and Hoffman's early investment means Facebook is inside the mafia fold) to monetize events.

Eventbrite also recently announced that Sean Moriarity, former CEO of Ticketmaster, joined the Board of Directors.

Eventbrite was founded in 2006 by CEO Kevin Hartz and CTO Renaud Visage, and has raised $9.55 million in venture capital. 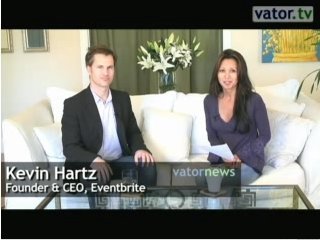