Virtual worlds are not dead; they're waiting

Remember SecondLife? Last we heard it had turned into a virtual wasteland, the sound of flies buzzing about empty Coca-Cola amphitheatres and abandoned Hummer showrooms, moss growing on the wings of the flying cars.

But virtual worlds may be in a quiet incubation period, readying a fierce comeback. At the Virtual Edge Summit Monday, Eilif Trondsen, the Research & Program Director at Strategic Business Insights and a director at SRI for 28 years, said that 3-dimensional immersive environments could hit a tipping point in a few years, once a handful of key technologies fall into place.

Trondsen said the “Holy Grail” of virtual worlds is browser-based, plug-in-less 3D Immersion. Thus far, such worlds remain the turf of early adopters and are unable to appeal to a mass audience because software and plug-in installation constitutes a major hurdle for user adoption, Trondsen said. The need for heavy clients also creates a wall between virtual worlds and the rest of the web, where barriers to social interaction, mash-ups, and content syndication were broken down long ago.

Virtual worlds may be where video was several years ago, when the only way to watch videos online was by downloading a big single file. Once streaming and then HD streaming became possible, video became ubiquitous.

So how far are we from achieving the “Holy Grail”? Not as far as some might think. Students at Stanford’s computer science department are working on a platform called Sirikata, an open-source initiative that will build a platform for virtual worlds allowing for maximum Web integration and leverage, with an eye to becoming a basis for others to build “killer apps”. The plan is for Sirikata to run in a browser as soon as the technology allows. And that technology is coming together--the three key components are currently in development:

HTML5: This is the next major revision of the core language used to write code for webpages. It aims to reduce the need for plug-in-based rich internet application (RIA) technologies such as Adobe Flash, Microsoft Silverlight, and Sun JavaFX. Incidentally, Tundsen says the Steve Jobs’ exclusion of Flash from the iPad is probably smart move made in anticipation of HTML5, parts of which are expected to be ready for implementation in the next two years.

WebGL: The Web Graphics Library is a standard for writing web apps that tap into hardware-accelerated 3D graphics, without the need for any browser plug-ins. When it’s implemented, it will allow the kinds of 3D graphics you see in Second Life or 1st-person games directl in the browser. The WebGL Working Group includes Apple, Google, Mozilla, and Opera.

Collada and X3D: The Collaborative Design Activity and X3D are establishing interchange file formats for interactive 3D applications. Think of it as XML for 3D files. The problem is that 3D environments are, in a word, hell to create; they just take a ton of coding. The more that pieces of code for shading, explosion effects, etc, can be shared and syndicated, the less 3D file creators have to reinvent the wheel, and the cooler virtual worlds become. Collada is managed by the Khronos Group, which is also running the WebGL initiative.

When browsers like Safari and Firefox incorporate those pieces, it will be possible click on a link in an email be launched immediately into a 3D immersive environment in the browser. At that point, virtual worlds will spill into the mainstream, and transform many sectors, most obviously commerce (social shopping), gaming, and education.

Until then, the sleepy frontiers of Second Life wait in silence. 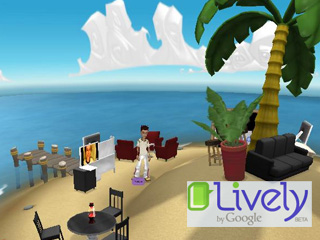