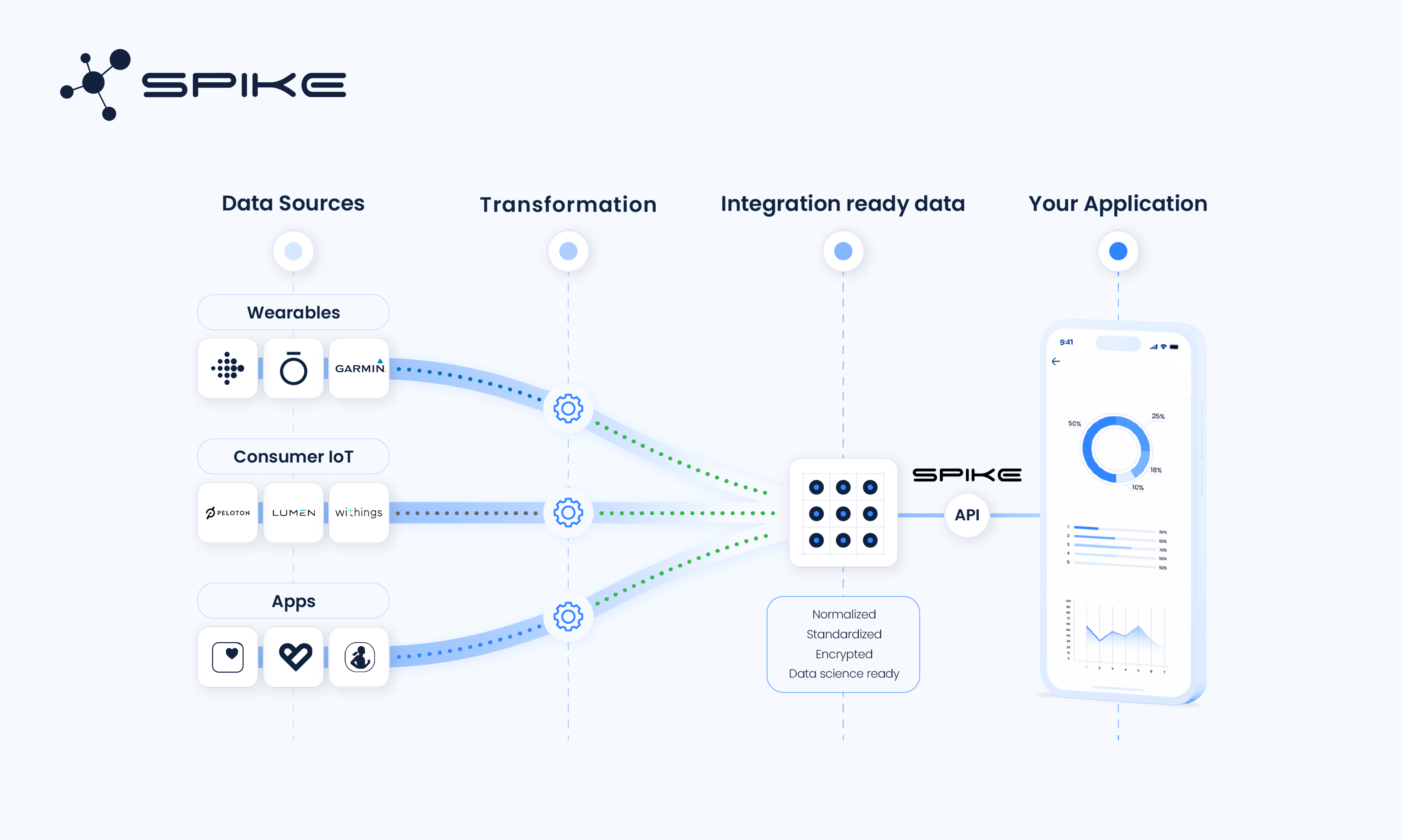 On average, a digital health company will integrate between four to eight wearables to allow their users to connect the device they use. It’s expensive and resource-intensive to develop wearables integrations in-house; meanwhile, cross-sensor data is complex, scattered, and making data usable requires data engineering headcount and domain-specific know-how.

"The main problems include that integrating five to 10 wearable/IoT connections can cost up to $50,000 and six months of time to production and usage at scale. Back-end developers are required to update and maintain connectivity, as well as the fact that provider licenses must be acquired and maintained," said Povilas Gudzius, co-founder and CEO of Spike, a company that allows companies to integrate biomarker data over from 200 wearable sensors and IoT devices into their applications. The company announced the closing of a $700,000 pre-seed round on Wednesday.

Spike solves these three problems via a single consolidated REST API and a managed ETL solution, allowing developers to get instant access to over 20 sensors with no upfront investment and test them in 24 hours, rather than six months. All API endpoints and vendor licensing are maintained and upgraded by the company on the client’s behalf.

"There are other API aggregation solutions out there. However, what we do differently is our data pipeline service and no-data storage/high privacy model. Our clients don’t have to build expensive ETL and data infrastructures. Data is standardized and cleansed across sensors and delivered directly into the client’s cloud, for example AWS, GCP, or Azure. We do not store or redistribute users' data. API also comes with a data encryption layer that is CCPA, HIPA, and GDPR compliant," Gudzius explained.

For example, nutrition/diabetes apps/intermittent fasting apps, which have the objective of helping their users losing weight, preventing diabetic shock, and improving overall health and nutrition, want a personalized service that leverages data from CGM sensors and smartwatches, like Garmin and Apple Watch, or glucose level tracking that's combined with fitness and metabolism data.

Meanwhile, fitness coaching apps are interested in merging users' data from smartwatches with data from Peloton, Strava, and Spotify, as well as having a holistic fitness coaching, motivation, and entertainment functionality. Finally, mental health apps want anxiety and stress levels measured by heart rate variability from smart devices such as Garmin Watches, while integrating mindfulness apps like Calm or Muse Headband IoT device for meditation tracking.

Formally incorporated in September of 2022, the company isn't disclosing how many customers it has at the moment, though Gudzius did say it was "dozens," and that the highest ROI is for the B2C apps that deploy a freemium pricing model of their applications, which is the majority of apps.

"Data connectivity to customers’ wearables allows them to provide premium and customized solutions, and migrate customers from free to paid subscriptions," he explained.

"In addition to that, we’ve seen a drop in paid and non-paid customers' churn rates, so it helps our customers to increase the ‘stickiness’ of their solutions; again, since data from wearables drives customization and personalized features. Leveraging Spike API requires no upfront investment since we offer a B2B SaaS pricing model and you can go live within the same week."

Spike’s pre-seed funding round was led by Geek Ventures, with participation from CEAS Investments and APX, as well as angel investors from Austin, Texas, NYC and Silicon Valley.

The company plans to use the money to invest in back-end infrastructure to support extra-large concurrent workloads as it expands its clientele and average size of customers. In addition, it will be hiring data engineers to further develop its Manager-ETL solution and lower the barrier of entry for small companies and startups to integrate data from sensors directly into their cloud.

Lastly, resources will go into further development of our white-label AI analytics services such as face recognition for skincare and prediction/recommendation AI tools for sleep and stress management.

Ultimately, Spike's mission is to bring the benefits of cross-sensor data fusion to real-life problems such as public health, Gudzius said.

"We want to lower barriers to entry so that even smaller startups in health, automation, climate tech, or other industries could easily benefit from new data sources of this physical world. In neuroscience, the name 'Spike' represents how neurons transfer information between synapses, and electrochemical signals are called 'Spikes.' This is how our own CPU, meaning our brains, gets information from our sensors, such as skin on the fingers and our eyes," he explained.

"We at Spike want to be that layer, the ‘Spike’ that connects the physical world of sensors to the digital world. We want to help thousands of B2B clients and therefore millions of people improve their health and their lives through this new data. Trends in data production by humans, sensor hardware improvements driven by nanotech, massive-cost improvements, and data accuracy, make us very optimistic for the future of the data tech field."