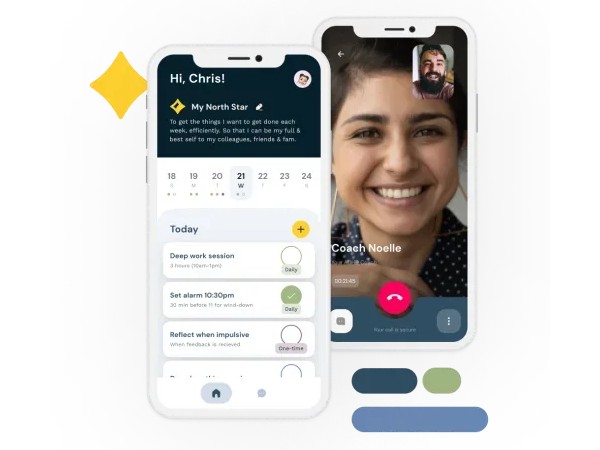 There are 13 million American adults who have nattention-deficit/hyperactivity disorder (ADHD), many of whom go through their lives undiagnosed. Once they are finally diagnosed, there are basically two kinds of treatment: either they take medication, or they do some kind of behavioral interventions, such as coaching.

Chris Wang is one of those who was diagnosed with ADHD as an adult, and her experiences with trying get treatment is what led her to found Shimmer, a science-informed and evidence-based coaching platform aimed at adults with ADHD, which launched on Wednesday with $1.3 million in seed funding.

"I lived my basically whole life thinking that a lot of things were wrong with me because I was doing things differently than others. Once I got that diagnosis, it put me down this rabbit hole of basically looking into what options were available to me: I saw medication, I saw therapy, and I saw coaching," Wang said in an interview.

When it came to coaching, she found that it was prohibitively expensive, typically costing $200 an hour to get help. That led to her team talking to thousands of people who have ADHD, psychologists, psychiatrists, and doctors to see how they could make coaching something that anyone could have access to.

"Basically, we were exploring our thesis, which was how do we make ADHD coaching up to 10 times cheaper than what existed by using technology to help aid the process? How do we reinvent the whole process so that we take out the parts that don't need to be delivered by a person? How do we take the rest of it and put it into technology? And how do we also give the right tools at the right time to the coaches, so the coaches save time per client?" said Wang.

Shimmer’s program, developed by leading ADHD experts, including those from NYU and UCSF, makes coaching more affordable by taking sessions that once took hour and turning them into 15 minute mini or “bite-sized” live sessions, which are then paired with an accountability system. Memberships start at $99 per month, and includes weekly 15-minute video sessions.

By cutting the sessions into a quarter of what they used to be, that brings down the cost of coaching because it reduces the human cost, which Wang explained is the most expensive piece of the puzzle.

"How we got that piece down, that all comes down to the behavioral science of it. We worked very closely with the entire ADHD community to discover what was needed in that 15 minute session. So, the first piece actually is more of behavioral science rather than technology," she said.

That other 45 minutes that Shimmer cuts out of the session was typically taken up by psycho-education and exercises. With Shimmer, these parts of the sessions are now made to be asynchronous, meaning they are more akin to homework that is assigned by the coach to be done between sessions.

That works better for individuals with ADHD, in fact, because of the way their brains work, said Wang.

"It’s really great that there is that ability to have that accountability and asynchronous tasks happening in between because 10 years ago you couldn't really do that. And it actually fits very well, especially for the ADHD community, because people with ADHD need that constant accountability throughout the week to actually do it or else," she said.

"I mean, I've been there when I just cram everything right before the session; if there is no accountability in the middle of the week, and I'm like, 'Okay, well, now I have to think about this for one week's worth right now.' We've all been there. So, the technology definitely helps a lot with that. So, we're really happy we're able to leverage that."

In addition to cutting down session time, there are two other ways that Shimmer reduces the cost of care: first is by helping coaches on the back end by doing their administrative tasks for them, such as marketing, finance, and, most importantly, client acquisition, which is their most expensive cost. The other are those accountability tools that are built into the app, which can be as simple as checking something off when a member has completed a task, and then pinging the coach so they can congratulate that member.

"It sounds very simple, but it makes a massive impact on people with ADHD who just aren't doing simple things like waking up at a certain time, sleeping at a certain time, doing certain things in their routine. So, that tooling is very impactful from a quality perspective, but also takes away a lot of the time that usually a coach would have to do," Wang explained.

One of the most important things for Shimmer, and for Wang, is that the company gets to define what ADHD coaching actually is, while also clearing up misconceptions about what it entails.

Wang defines therapy as being "backwards looking," meaning its about untangling things in your past and reframing them so that you can go forward better, while coaching is forward looking, revolving around goals and how to make changes, systems, and routines to be able to get there.

The part that people get wrong, she said, is that they think that when it comes to coaching, they'll come with a problem, and the coach will come with an answer; instead, with coaching, the member comes with a problem, and then the coach will ask a lot of questions about those problems to get to the real root cause of the issue

"Coaching is essentially helping people, one, see the vision of what's in the future, and then, two, being that guide to help you put the building blocks in place to help you get to that future. The real important part of why I bring up the first piece is because, for people with ADHD, time is hard and, oftentimes, you don't look beyond this current moment and it's hard for you to see the future," Wang explained.

The Shimmer program is very strongly rooted in Acceptance and Commitment Coaching which is all based on how a members lives a life that is aligned with their values at all times. That means it's about having someone by their side who puts in a structured systemized way to look at the future and make sure they know where they want to be and if that is aligned with their values.

Allowing the ADHD community to reach its full potential

The company's new funding round came from investors including Y Combinator, Honeystone Ventures, Koa Labs, Megan Hall, and Gaingels, among others.

Currently, there are eight coaches on the Shimmer platform right now, all of whom are heavily involved in developing the Shimmer curriculum and product. The plan is to let members join based on the company's coaching capacity, and part of the new funding will go toward building that out.

The money will also go toward building out the product, including developing a resource hub with education, as well as automation and some gamification of the product so that when members do more things, they get rewarded.

While Wang makes it clear that anyone can use Shimmer, whether or not they have ADHD, the platform is being built with people in that community in mind first.