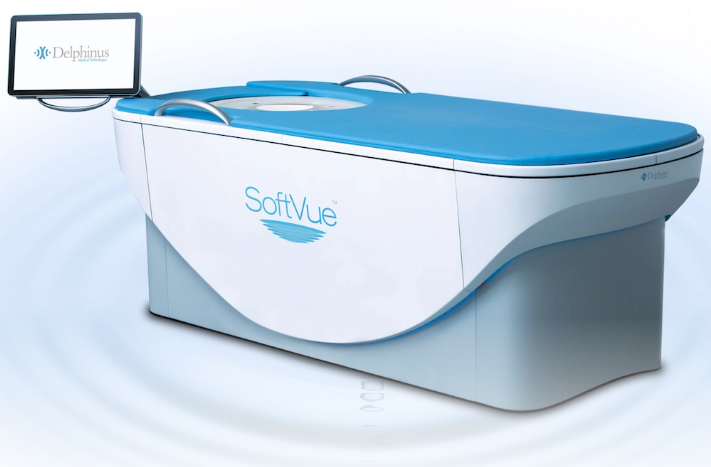 To solve for this problem, Delphinus Medical Technologies developed its SoftVue 3D Whole Breast Ultrasound Tomography System, which images the entire breast with a single scan without any radiation or compression.

On Thursday, the company announced that it raised a $30 million Series D from both new and existing investors, including Arboretum Ventures, Beringea, North Coast Technology Investors, Venture Investors, Hopen Life Science Ventures and Waycross Ventures. This news comes just a few days after the company revealed that the first SoftVue System was sold to The Barbara Ann Karmanos Cancer Institute in Detroit, where Delphinus was spin out of.

The company says it will use the new funding to fuel worldwide commercialization of SoftVue.

The SoftVue System includes a table for the patient to lie face down, with their breast positioned in a water tank. The ultrasound probes form a circle around the breast, moving up and down, to allow for scanning of the whole breast.

While the Novi, Michigan-based Delphinus notes that SoftVue is not intended to be a replacement for screening mammography, it is FDA approved as a supplemental breast screening procedure to be used with mammography for women with dense breasts.

SoftVue has previously received three 510(k)s, and has received PMA indication that allows it to be performed at the same appointment as screening mammograms; when the two technologies are combined, SoftVue has proven to increase cancer detection by 20% for women with dense breasts.

“Every day it becomes increasingly obvious that we have delivered a game changer technology to transform dense breast screening,” Mark J. Forchette, president and CEO of Delphinus Medical Technologies, said in a statement.

“When potential customers hear that SoftVue finds more cancers, delivers an exceptional patient experience and efficient patient workflow the same day as the mammogram without costly staff additions, they recognize the value for their patients. Our series D will support the robust commercial strategies and efforts needed to help sites quickly adopt this solution for their patients.”