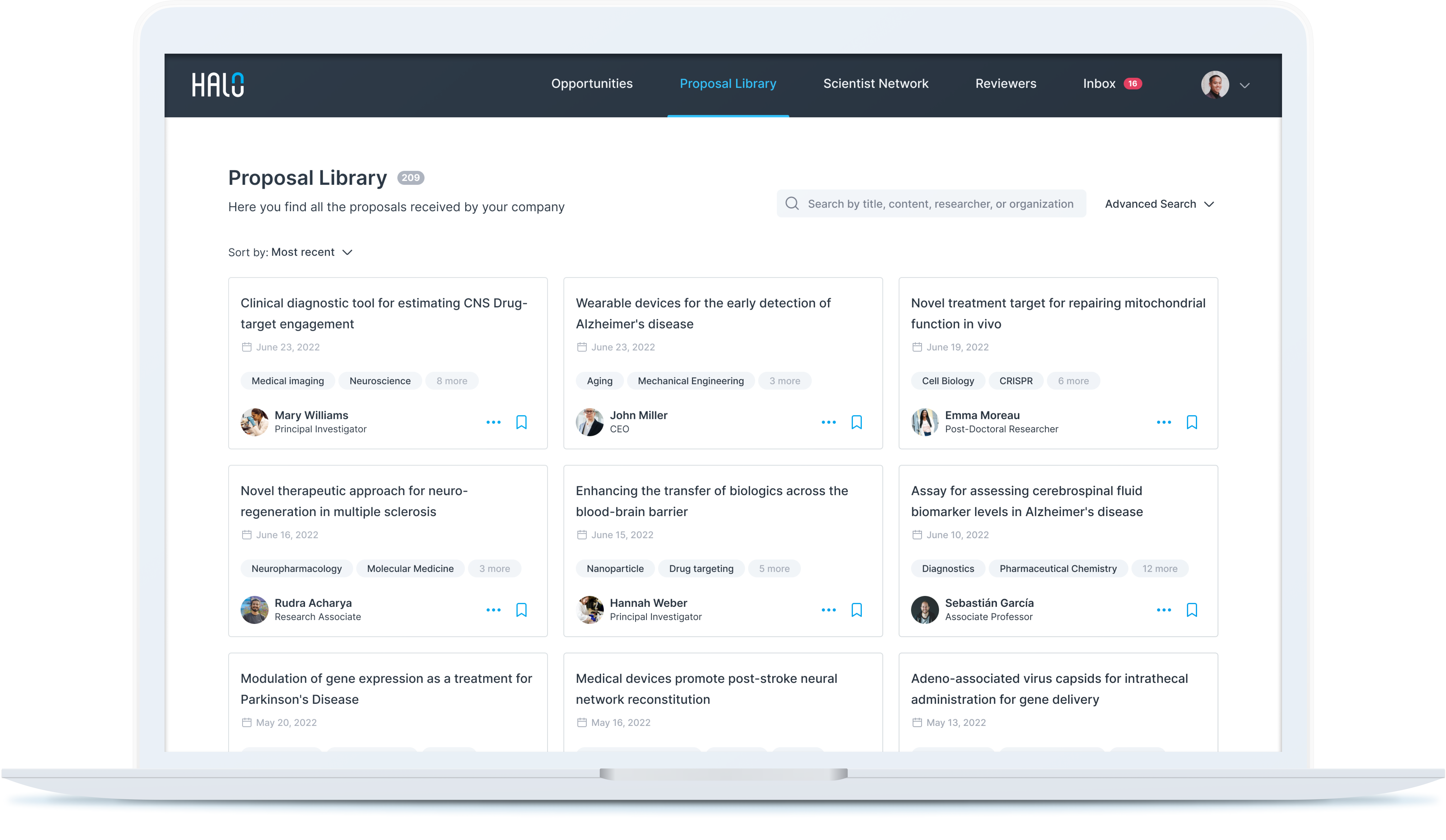 Since 2000, total global R&D spend has more than tripled, going from $675 billion to $2.4 trillion in 2020. Yet, the process by which corporate R&D teams find scientific partners to fuel their research has remained pretty much the same: it still involves a lot of manual work such as going to conferences, visiting universities like Harvard, MIT, and Stanford, or even Googling or searching publications.

This results in a lot of wasted time, and a lot of potentially groundbreaking research, which can help the world, such as cures for diseases, vaccines, and treatments, likely not becoming realized, simply because the two groups can't find each other, said Kevin Leland, founder and CEO of Halo, a platform that is trying to bridge this divide by connecting scientists and corporate R&D teams.

"You have scientists spending 40% of their time filling out government grant applications, so we have the smartest people in the world spending almost half their time doing paperwork. Then we have companies just not knowing about research that could impact their business purely because you can't just rely on serendipity. There's more programmatic ways of connecting the two sides using data and networks and that's what we're doing," he explained.

"It probably seems obvious because there's so many other industries that have done this matching more effectively but, in this world, it's very much happenstance and who you know and where you are. There are real world repercussions when some interesting research doesn't see the light of day."

The company acts as a sort of LinkedIn, but aimed specifically at  these two groups, and now it has a fresh new round of funding to build that out, as the company announced $2.6 million in seed funding from Asymmetric Capital Partners, Village Global, Anne Wojcicki, AirAngels, Conrad Irwin, Rachel Hepworth, and others.

Companies on Halo create an R&D partnering page, where they post Requests for Proposals (RFPs) for specific needs, or Open Calls around general areas of interest. On the back end, the company provides them with a suite of software tools that make it easier to evaluate submissions and to build their own network of scientists.

"The companies are concerned about their time, so that's where the software tools come in:  by leveraging our data, leveraging our network, we're making a lot easier to find not the 1,000 okay researchers, but the 25 proposals that are aligned with exactly what they're looking for," said Leland.

The scientists, meanwhile, submit short, non-confidential proposals in response to each RFP or Open Call. The companies then select which projects to advance into a collaboration.

"They’d have to somehow go to every single website and figure out who's doing what, call to a bunch of people, it's literally impossible. So, we're making it seamless and easy for them to find these people."

Since launching in 2020, 4,000 scientists and startups across over 95 countries have joined Halo's network; it also works with Halo works with multiple Fortune 500 organizations in industries such as biopharma, medical devices, consumer goods, and agriculture, including PepsiCo, Bayer, Takeda, Corteva, Clorox, and Baxter.

In the case of, PepsiCo, for example, the company used Halo to find scientists who could work on a research collaboration to remove the odor and flavor of coconut water, so that PepsiCo could use it to make lower sugar juice blends; Bayer, meanwhile, used the platform to find researchers to gift grants to as a way to start building relationships with them.

In addition to scientists and corporate R&D teams, university administrators in technology transfer, corporate relations, and research development also use Halo to share opportunities with faculty, track the status of their proposals, and amplify their reach.

Scientists and universities can join the network and submit proposals at no cost, while companies can create a free R&D partnering page at no cost; in order to post RFPs and Open Calls they need to buy an annual subscription, however.

Halo says it will use the new funding to double its eight person team, hiring across product and business development. It will also expand its network of scientists around the world, while also developing additional collaboration features and tools, which will be based on the feedback that it gets from customers.

For example, the company recently released two features, one where it allows companies to upload an entire network of external researchers from an Excel sheet, as well as one where they can search by the proposals they received on the Halo platform.

The ultimate goal, Leland said, is to make it a lot easier for corporate R&D teams and scientists to discover one another so that the company can move science forward.

"We want to provide tools to keep track of that project that they're funding, So essentially, we want to facilitate the entire R&D collaboration process from start to finish."