Cionic's wearable for people with mobility issues gets FDA clearance

The company is focusing on people with issues due to MS, cerebral palsy, and stroke 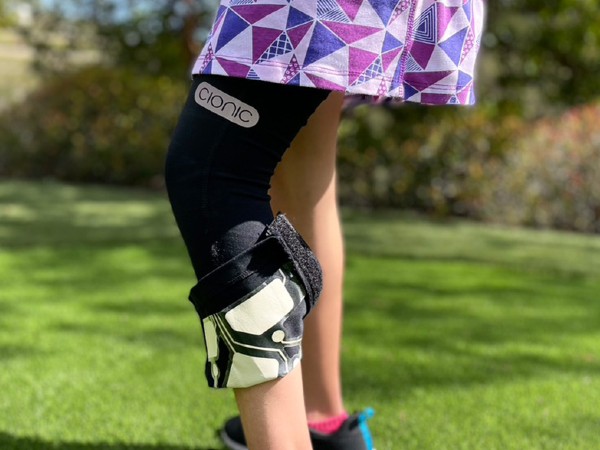 It seems like we've got wearables and censors in everything these days, from our mattresses  to our clothes, even in our toilet seats. There's seemingly no health condition or issue where we can't have continuous monitoring. Yet, for people with mobility issues, including those due to multiple sclerosis (MS), stroke, cerebral palsy (CP), and other neurological conditions, the options are limited.

This is what Jeremiah Robison found when his daughter was diagnosed with CP following a premature birth.

"It's basically brain damage and it's the most common childhood disability, although it's not very well talked about. There are not a lot of resources, and not a lot of innovation to help that community," he explained to me.

"The best technology I saw for her were crutches and canes and walkers and wheelchairs."

People who have these conditions often have problem with their gait, meaning they have trouble walking due to inability to activate the dorsiflexors to lift the foot often resulting the dragging of feet. They may also have an inability to keep their foot straight, causing inversion, so they land on the side of their foot, and roll their ankle. All of this puts them at higher risk of falling.

When Robison's daughter had to have her gait checked, however, the doctors barely got to see how she walked at all before making a diagnosis.

"When my daughter went and got her gait analysis done, they strapped her up with all of these different sensors and had her walk 10 steps. It was two hours of setup and she walked 10 steps, and then they were like, ‘there's your gait report'," he told me.

All of this is what spurred him to found Cionic, a company that has developed a wearable sleeve that goes over the leg and uses electric stimulation to help patients improve their gait. On Tuesday, the company announced that it has been granted FDA clearance for its device, which will allow it to take the product to market.

"When you think about being an entrepreneur in the healthcare space, some companies maybe have gone afoul in the past trying to circumvent FDA, but we've been, fortunately, looking at FDA as a partner in this," said Robison.

"We’ll continue to be led by science, we're going to continue to expand our use cases in our populations, but now we are going to actually make that difference in the community and start selling products and then actually start engaging with payers and others to make sure that we can fulfill our commitment, which is affordable accessibility to this product."

Founded in 2018, the Cionic Neural Sleeve is made with soft, flexible fabric that is fitted to an individual’s leg. The Neural Sleeve, which can be made in a variety of colors, can be worn both over and under a person's clothes.

Inside that fabric are an array of sensors that allow the device to analyze, predict, and augment a person’s movement through the use of algorithms; it can read the signal sent from the brain to the person's muscles, meaning that it can predict their movement 1/10th of a second before their foot lifts off the ground, leading to improved gait and reduced risk of falls.

"I started building out the predictive algorithms to understand what was going to happen next, and then I thought it critical was to build a system that was really a closed loop, neural prosthesis built with functional electrical stimulation, because it actually addresses the underlying neurology in a way that exoskeletons can’t. We're actually firing and activating the muscles at the appropriate time, during gait," said Robison.

While there are other muscle stimulation solutions that can be used in the home, they are typically limited to one muscle in the leg, while Cionic can target four leg muscles at the same time. There's also gait analysis that happens in a lab, where a physical therapist has two buttons, meaning they they fire one or two muscles at a time.

On top of not being able to stimulate the same number of muscles, these other solutions also don't have the ability to actually measure the underlying neurology, while Cionic's electrode array can measure the activity of the muscles and also stimulate them at the same time.

In addition to its wearable, Cionic also includes an app, which includes the gait assist program, as well as exercises that can be customized for the individuals, such as toe raises, calf raises, knee extension, and inflexion, so they can build strength. There's also a mode where the app actually uses the firing from the brain itself to help rebuild some neuroplasticity, the idea being to address the whole patient and have it be continuous.

So far, the company has been able to show that 94% of its participants its trial, done in partnership with Cleveland State University, had a positive increase in dorsiflexion clearance and inversion. On average, they saw nine degrees of improvement, nearly double the typical five degrees that patients see on current treatments.

Cionic has also done a home usability study, in which it has people who using its device at home every day, in which patients reported back is this feeling of independence and confidence in engaging.

"That's our end goal, to help people to do the things that they love to do, engage in that community. And so we've got our scientific evidence, and then we have what our users are saying, and the combination of those two things is motivating," said Robison.

FDA clearance and going to market

Now that Cionic has this FDA clearance, it can finally bring its product to market. As such, it also launched it's Founder's Program on Tuesday, in which users can pre-order the device for $200 a month for the first 12 months, without obligation, after which they will own it outright.  That will be the company's first set of customers, after which it will expand into other pricing models.

The company also plans to expand into new areas, including conditions like Parkinson's, as well as expanding to other parts of the body; for example, Robison told me that the company gets many requests from its stroke participants to be able to use it on their arm, as grasp and fine motor skills are a challenge for that population.

It will also mean expanding how users pay for the device; the company is initially going direct-to-consumer, Robison explained, because it can take a while to get insurance coverage but it does eventually want it to be covered.

"We're at a price point where, because it’s a prescription device, some of that cost can be defrayed through health savings plans and flexible spending accounts. And then we will, as we work with payers, find opportunities to get full insurance reimbursement."

The big vision for Cionic, though, is to bring 24/7, continuous contextualized care to people who don't currently have access to it.

"When you think about what that can do for healthcare, we can catch things early, we can intervene in very precise ways. We can combine monitoring with pharmaceuticals, so we can get very precise treatments. I want to be on the forefront of that. I want our company to be leading the way," said Robison.