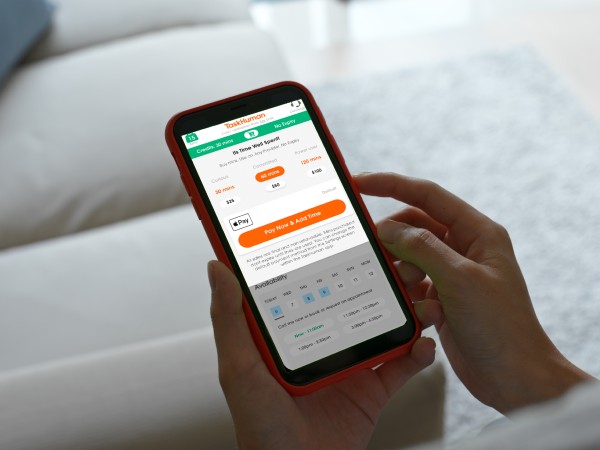 While the impact of Google on our lives, and the way we get our information, is immeasurable, it's still somewhat limited in what we can actually do with that information. For example, if someone wants to lose weight, Google can give them billions of links, and it might even give them ways to contact personal trainers, but it's still up to the individual to determine who the best match is. It can take hours, or even months, to finally see someone.

Digital coaching platform TaskHuman wants to eliminate all of that inefficiency by automatically connecting people to live coaches within minutes, when and where they already are.

"In this day and age of Uber, where you think you need a taxi but you didn’t bother scheduling anything, instead you're just going to open the app and three minutes later somebody comes and picks you up, we thought, ‘Man, why isn't it this simple to actually get live human help?’ And so, that's what TaskHuman is," CEO and co-founder Ravi Swaminathan told me in an interview.

On Wednesday, the company announced that it raised $9.5 million in a Series A funding round led by USVP, with participation from new investors Madrona Venture Group and RingCentral Ventures, along with existing investor Impact Venture Group, and angel investors including Baron Davis, Sanjay Mehrotra, Gopi Kallayil and Somesh Khanna. This round brings its total capital raised to $14.3 million.

To use TaskHuman, users just have to download the app, and search for whatever they need help with, which can be anything from "I want to lose weight" to "I want to manage my stress level" to "I lost my dad recently and I don't know how to cope with that." The app will then connect the user to the appropriate coach, which can be be a fitness instructor, a marriage therapist, or a grief counselor. The company currently has over 1,000 coaches in 20 different countries and can be accessed 24/7 for over 1,000 different topics. The user just taps on a coach and they go on a video call with them instantly.

The app is also organized by availability, so it's not just a directory of people that users can eventually call, but instead it's a real-time platform where users are seeing the real-time availability of the coaches.

However, in addition to getting users connected quickly, TaskHuman is also intended to help foster long-term relationships between coaches and users in those areas where it's appropriate; for example, if someone begins using a marriage counselor, they would likely need to come back for sessions on a weekly basis. To do so, all users have to do is go to the reconnect screen on the app.

"Steve Jobs used say, ‘We're putting 1,000 songs in your pocket with the iPod,’ and now we're putting thousands of coaches in your pocket for all those daily activities of life and work. We cover leadership, coaching, talent, career coaching, lots of stuff around clean eating, nutrition, marathon training, work-life balance too, all the way to pet coaching," said Swaminathan.

"It's meant to be that constant companion with you that gives you the world of coaching at your fingertips."

Right now, TaskHuman is offered in two ways: either as a benefit to employees, or it can be purchased by individuals who can sign up on their own. The company currently has nearly 50 companies on the platform, including Zoom and Juniper Networks. In those cases, their employees get full, unlimited free access to the platform. In the case of individuals signing up, they typically pay $1 per minute on the app, which they can then divide between any specialist on the platform.

The idea, Swaminathan explained, is to allow all users pay the same and get access to the same services, making it so that coaches are no longer out of reach for certain users.

"We wanted to be like Netflix. The fact that Netflix paid $500 million to get Seinfeld onto the platform is none of the consumers’ business; you and I get to pay $17.99, or whatever we pay, and we get to consume the product. So, we thought, 'this is how it should be democratized.' This democratizes coaching and makes it less stressful to actually get the coaching," he told me.

"Everything else is a barrier: the more barriers we put on how this is engaged, you’re just making it difficult for the consumer. We wanted to take away all of that, and go, ‘just go tap a couple of buttons and you're done.' It's easy to understand."

While the company doesn't currently reveal how many users it has on the platform, it was revealed that 80% of people who make a call on the app once, use the app again.

The company will use its new funding to build out its team, which currently consists of 60 full time employees, with the goal of at least doubling or tripling that number by adding more coaches and more salespeople. That is due to how fast the company is growing: despite only being announced now, the Series A round was actually closed in April; since then, TaskHuman has grown its ARR by 700%.

The company also plans to expand to new categories, while also going deeper into leadership coaching, as well as travel planning, which it just launched. TaskHuman also plans to grow its baseline of well-being areas, whether it's physical well-being, mental, spiritual, emotional, and financial.

While part of TaskHuman's goal is to become an app as important as the calendar or email on a mobile device, Swaminathan made it clear that, more than anything, the real value he sees coming from the company's solution is the way it helps fosters human connections.

"The story of TaskHuman, honestly, is not about the funds we’re raising, or the CEO, or the management team: it really is the story of people and their voices and their passion on the coaching side that we're hoping to bring to consumers," he said.

The company is allowing coaches to take what they are good at, and what's meaningful to them, and to bring it to other people; at the same time, the consumer, instead of just getting hit with articles and videos when they have a problem, are able to connect to a real human being.

"It's the story of two people, one who decided to help another person and the other person who needs the help, connecting and finding meaning in that connection."