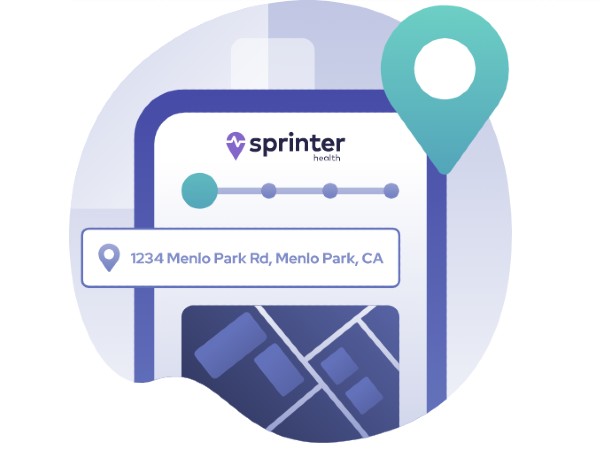 Since COVID started, the idea of healthcare being something that doesn't just occur in the four walls of a doctor's office has taken off like a rocket ship, with telehealth and virtual care quickly becoming part of the mainstream conversation.

The next phase, then, has to be: what if in-person healthcare came to the patient inside their home? This isn't a brand new idea, of course: doctor house calls used to be common decades ago, and there are companies, such as Heal, that have been working to bring them back. Thanks to the conditions created by the pandemic, and the trends it accelerated, such as moving care into the home and not wanting to be around other potentially ill people the timing may be right for house calls to make a comeback.

That's what Sprinter Health is betting on. The company, which was founded by Max Cohen, former VP of Mobile of Oculus prior to its acquisition by Facebook, and Cameron Behar, former Google and Facebook engineer, wants to be the DoorDash for lab draws. That means it provides on-demand service, sending full-time nurses and phlebotomists, which it calls “Sprinters,” into the home to do lab draws, vitals checks, and COVID-19 testing.

"Cameron and I had each had our personal challenges with healthcare: Cameron with a herniated disk that left him having to use a cane through college, and myself through a family member with a rapid, incurable disease. We saw some of the best and the worst of the current systems, and after spending years working on ads and games at some of the top technology companies in the world, we wanted to do something more meaningful," Cohen told me.

"We wanted to use our technology backgrounds to work on providing access to care in the most affordable way possible, so that as the amazing scientific advances are made, those outcomes aren't limited to just the most affluent."

Sprinter Health came out of stealth on Wednesday with $33 million in a Series A round of funding led by Andreessen Horowitz, with participation from General Catalyst, Accel, Google Ventures, and other investors. Sprinter had previously raised a $4.6 million seed round led by Hemant Taneja at General Catalyst in February.

The company plans to use this new money for hiring and geographic expansion. It's currently in the Bay Area and Sacramento, with LA and San Diego coming online in the next couple of months. In early 2022, the company plans to expand to Texas and south Florida.

Along with the funding, it was also revealed that Julie Yoo, General Partner at a16z, will be joining the board of directors at Sprinter Health.

"In just a few weeks, I've been absolutely amazed working with Julie; she has the rare skill of being able to quickly take in a lot of information, synthesize it thoughtfully, and then add back strategic insight that helps us view a problem in a new light. The best executives I've worked with at Google and Facebook had this ability and Julie has it in spades," said Cohen.

"We gravitate towards founders who have seen what great looks like, and who know what it takes to lean into new category creation opportunities that come along with such rarity in any given industry’s lifetime. Max Cohen and Cameron Behar played critical roles at Oculus / Facebook AR/VR in setting the stage for a new tech platform to become a mainstream consumer application that overcomes the constraints of physical location and distance," Yoo wrote in a blog post.

"They’re now channeling their exceptional vision and execution chops into enabling this paradigm shift towards unbundled, virtual-first, value-based care delivery, with world-class technology at the core and an amazing set of early customers who also believe in the future of untethered healthcare. We couldn’t be more excited to be leading Sprinter’s Series A and joining their board, and partnering with Max and Cameron as they build towards making “Sprinters” a core part of every patient’s healthcare journey."

Sprinter Health, which was incorporated in January of this year, deploys two types of models: partner-driven and patient-driven.

On the partner side, the typical patient is someone who is waiting for a diagnosis that requires blood work from a specialty lab, typically one they can't just drive to locally. Sprinter allows the partner to coordinate with the patient and find a one hour window that works for them; they will then email the patient with instructions the night before, text them when they're on the way with an ETA, and then perform the service. The sample will be mailed to the specialty lab, and the patient will get the results through their provider. In this case, the partner covers the cost of the service for the patient.

On the patient-driven model, the patient pays out of pocket for the service. Sprinter has a direct-booking website where patients can pick the time most convenient for them, add other services like COVID testing, and then the Sprinter will show up at their house.

"Our patients so far have ranged from adults booking on behalf of elderly parents (to avoid having to take the risk of transporting them to a lab), parents booking on behalf of scared kids, with everything in between. Our average patient is a busy professional who can't take the one to two hours of their day to go get lab work done," said Cohen.

On average, Sprinters are in and out of the house in under six minutes. They are all W-2 employees of Sprinter Health, not contractors, in order "to ensure the highest quality for our partners."

While the company doesn't say how many customers it has currently, or how many patients it's reaching so far, it was revealed that it currently has a partnership with a family practice physician named Dr. Arun Villivalam, who hires phlebotomists and nurses. The company currently has five clinical staff in the Bay Area, which it expects to grow to close to 200 by the end of next year.

While the company is starting with in-home labs and COVID-19 tests, its real goal is to pair with health systems and telehealth providers in order to "create a new, more affordable method of care," as Cohen put it.

"By taking out arduous and expensive trips to facilities, we can fill in the missing link between remote providers and the data that they need to make the best medical decisions. Since we're not providers ourselves, we're open to and thrilled to work with all sorts of partners in the various elements of the health system," he told me.

"There are a lot of holes in healthcare today and no one company or group will fill them entirely. An area that we believe is underserved is increasing access to care while being conscious about health equity, and you need to match the right level of clinical professional to the task in order to keep it affordable. We want to help start this process but are eager to partner with anyone who shares that mission."