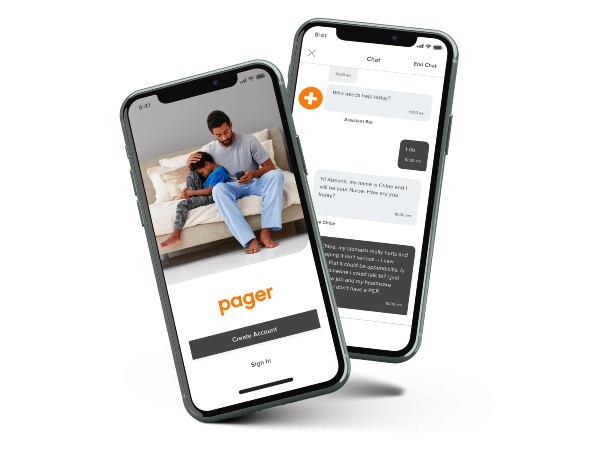 Everyone knows that healthcare in the U.S. is complicated and confusing, and yet we're all expected to navigate it on our own: we diagnose ourselves, make our own appointments, and then, worst of all, follow up about our own care. We do all this despite the fact that, unless we're doctors ourselves, none of us really know what we're doing.

This is a confusing and inefficient way to deliver care, and it also leads to many more people winding up in the emergency room than need to be, said Walter Jin, CEO and Chairman of healthcare coordination and communication platform Pager.

"My brother is an ER doctor at Kaiser Permanente and he tells me that 80 to 90% of his cases don't need to be in the ER. Categorically, they have no place being in the ER; he can treat them, but these are low acuity, medium acuity cases," he said.

"There's this misallocation of resources where, because people can't access care, and because they're lost and they don't know exactly what's wrong with them, they just go to the emergency room because they’ll take care of them. It ends up costing the system a lot of money, it sucks away resources from people, like my brother, which are in short supply. And it's a bad experience for the patients and the members."

Pager helps solve this by working with large health insurance payers and large hospital health systems, helping to diagnose their members, get them to the right type of care, and then follow up with them afterwards.

"Pager makes it so it's like you have that doctor in the family to help with information, navigation, and then coordination. That's what we provide."

Pager's solution has caught on over the last two years, with nearly 800% average annual consumer encounter growth, and now the company has taken a big new round of funding to help it meet that demand, revealing on Tuesday that it raised $70 million as part of an equity and debt financing round.

The Series C round was led by Susquehanna Private Equity Investments, along with an affiliate of Horizon Healthcare Services, which New Jersey’s largest health insurer. The debt financing portion of the round was provided by Silicon Valley Bank.

The three legs of the patient journey

The first part of Pager's solution combines artificial intelligence and a team of human nurses, who are licensed in all 50 states, who help patients figure out what's wrong with them; then, based on what's wrong, and what the right type of care that the patient requires, the care team will direct them on where they should go to get the best care, whether that be via telemedicine, or by seeing a specialist.

"You don't have to get bounced around the system; rather than going to the ER first and then telemedicine and then end up with a specialist, we’ll just send you directly to a specialist. It's all about finding the right type of care based on what your needs are, and that's what my brother would do for me, with a doctor in the family," said Jin.

The platform also reduces the friction of getting an appointment, with a scheduling portal that Jin compares to that on OpenTable. Finally, there's the third part of the journey, the aftercare, which is what really sets Pager apart: the way that care works now, nobody follows up with a patient to make sure that they're doing okay, or if they're taking their medications properly, or even to see if they have any questions.

In fact, he told me, about 60% of the people that Pager follows up with still have questions about their prescriptions.

"There are a lot of questions we have and Google's not the answer. The answer is you need a doctor in the family to help interpret what are those next best options, what are those questions you have, and are you feeling better. If not, we’ve got to get you back into the system."

While Pager started out as a direct-to-consumer company, it now deploys a B2B2C model, meaning that a patient can only access the platform if their insurance company, or their healthcare system, has signed up as a customer and offers access via their website or app.

For example, if someone has insurance through Blue Cross Blue Shield, Pager would partner with them and deliver its technology so that when that patient will be get access to Pager's functionality when they log into the Blue Cross Blue Shield website or mobile app. That includes its scheduling portal, its symptom checker, and its team of nurses, doctors, and pharmacists; through it all, however, the patient won't know they're using Pager.

The reason that Pager works with large health insurance payers and large hospital health systems, he explained, is because of their ability to outreach to a lot of people, sometimes numbering in the millions.

"When we partner with big health plans and big health systems, because of their reach, what we have been able to do is to give our technology to them to enable whatever tech stack they have to power their tech architecture so that they can deliver this family experience to the millions of people, or the hundreds of thousands of people, that they currently serve. What you've seen is a tremendous amount of growth in Pager because we pursued this very unique go-to-market strategy."

Some of Pager’s partners include Horizon Healthcare Services Inc., Cambia, Triple-S Salud, and Seguros SURA. It is currently reaching about 15 million patients, with the goal of reaching 100 million. The platform has driven more than 30% utilization and an average savings of more than $190 per clinical encounter.

Part of the reason for this is because of how easy Pager's technology makes healthcare navigation, said Jin.

"Convenience leads to compliance. The technology and the workflow and the services that we provide offers a convenient experience so that you don't really have to lift a finger, so you'll end up using the product more often and using it the right way. And you start to listen to what we do, because we make it super easy for you and that's why we have such great adherence and compliance and utilization on our platform."

This latest round of funding brings the company's total raised to more than $120 million, and it will be used, in part, to scale in order to meet demand, especially as digital care has gone from a "nice to have" to a "need to have," as a result of the pandemic. It will also be used to expand geographically, to new markets in the United States, as well as in Latin America.

Finally, it will be used to build out the platform, including investing more on the AI side, as well as on the data science side. That could mean also growing into other types of care, including specialty care, chronic care, and rising risk.

Ultimatelt, Jin's view of the future of healthcare is one that is easier to access, solving problem with the supply chain and the fragmentation that exists in healthcare, and one that offers a much better experience, and he believes that companies like Pager will make that a reality.

"When we have health care issues, it's a struggle. It's hard enough as it is because of whatever's wrong with us, and that's why we streamline the process of finding the right care at the right place in the right time and getting quick and convenient access that care. Having someone follow up who really is caring and concern for our well being, that is what my brother does for me. Our mission is to deliver that to the 99% of people who don't a doctor in their family."