The company rebranded from MBio Diagnostics earlier this month 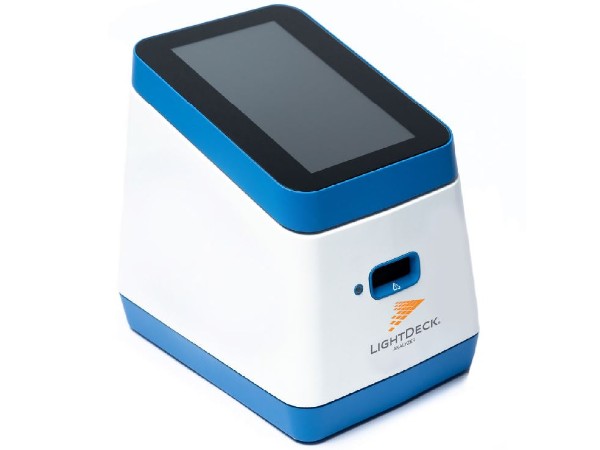 One of the most disheartening aspects of the whole COVID-19 pandemic has been the lack of affordable and fast-acting testing. Tests are too expensive, too scarce, and they take too long to process. All that of that has contributed to the U.S. not being able to effectively stop the spread of the virus because we can't do contract tracing.

LightDeck Diagnostics is looking to solve this problem through the use of laser technology to commercialize fast and affordable, lab-quality COVID-19 tests. On Thursday, the company announced that it raised $11 million in Series B financing from Incubic, Entrada and Boulder Ventures, bringing its total funding to $60 million.

"My neighbor who has cancer needs to get a COVID test three days ahead of her flight to Massachusetts General where she gets her chemo treatments, but readily available testing that’s both fast and accurate testing isn’t an option, making her life even more difficult," Chris Myatt, PhD, founder and CEO of LightDeck Diagnostics, told me.

What LightDeck does is "make it easier to understand the status of patient’s health on-the-spot, helping healthcare workers make quick, accurate treatment decisions," he said by using a "little-known" laser technology called a planar waveguide. That allows the LightDeck platform, which can be deployed almost anywhere, including  emergency departments, to nursing homes, schools and airports, to provide lab-quality results in just five minutes.

"Combining the high sensitivity and simple workflow of the waveguide with cost-effective manufacturing, LightDeck provides broad access to advanced testing that we need to prevent the further spread of the disease and help inform better faster treatment decisions," said Myatt.

Here's how it works: first, the user dispenses their sample, such as blood from a finger prick, into the cartridge and inserts it into the analyzer. The rest of the procedure is automatic and requires no additional oversight from the user, which is what Myatt says separates it from many traditional test formats. The sample then mixes with a reagent pellet in the sample port where the substance the company wants to measure combines with a fluorescent molecule.

After a specified time, the sample-reagent mixture flows into the cartridge where it combines with capture molecules that are printed as spots in an array on the waveguide cartridge. The fluorescent signal is measured and interpreted by Lightdeck's instrument’s software to give the user a final result.

"Visualize this as a very controlled glowing surface which illuminates only the intended capture areas, and not the rest of the fluid sample. This is an important benefit, as it reduces interference from cells and other 'junk' floating in a sample that may cause autofluorescence and high background noise," Myatt explained.

"Other test methodologies require extensive sample handling such as filtering or wash steps to deal with this, but our approach does not. It also gives us a very favorable signal to noise ratio on the fluorescent signal, which improves our sensitivity."

The company's COVID test can determine whether a sample contains SARS-CoV-2 antibodies with 97.9 percent sensitivity and 99.6 percent specificity.

LightDeck was founded in 2009 as MBio Diagnostics, but announced earlier this month that it would be changing its name. As MBio, the company had secured 30 patents and funding from the National Institutes of Health, the US Army, Defense Advanced Research Projects Agency and Biomedical Advanced Research and Development Authority.

"The name change reflects our commitment to our proprietary LightDeck platform and its pivotal role in shaping the future of healthcare and diagnostic testing more broadly," Myatt explained.

While the company hasn't yet started selling its COVID-19 tests, it has seen market traction with its LightDeck platform in other industries, including shipping thyroid and hormone tests across the veterinary space with its partner, Heska, as well as water quality tests in the environmental space. The company has also been working with the Henry Jackson Foundation to support host response research; that organization is using LightDeck's systems in military research hospitals.

Going forward, the company says the new funding will be used to support the development and commercialization of in vitro multiplex tests for COVID-19, host-response panels for acute infections, sepsis and cardiac markers. It will also go toward expanding the team; since January, LightDeck has doubled its headcount to 74 employees, and is continuing to hire across the business.

The ultimate goal for LightDeck, Myatt told me, to test for conditions beyond COVID, including including heart disease and sepsis.

"We’re already shipping thyroid and hormone tests across the veterinary industry, and we plan to bring these types of tests to the human diagnostics space as well. We’ve also seen traction in the environmental space and have received multiple contracts to bring better water quality testing to our lakes and oceans. Overall, we’re looking to help create a healthier world."

The company's mission to bring health equity to underserved markets