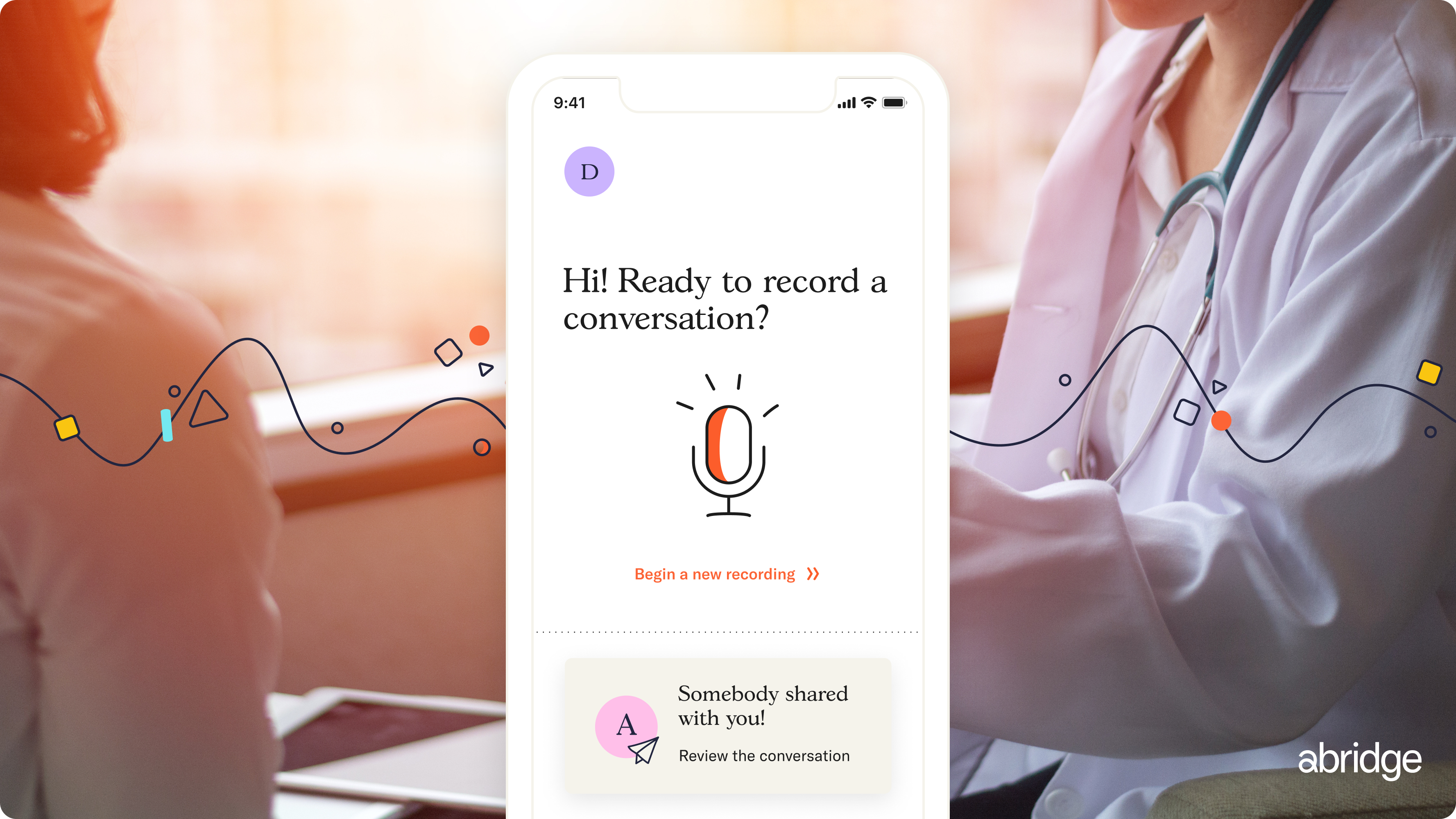 Going to the doctor can be an overwhelming experience under the best of circumstance; if it's for a really serious disease, then keeping track of everything can be a nightmare. It can be difficult to retain all the information that a doctor tells you, which can be very technical and hard to understand to a layperson.

Abridge wants to help alleviate those problems. The company, which officially launched on iOS and Android on Tuesday, helps people better understand the details of their medical appointments by transcribing their conversations with their doctor, highlighting the most important parts.

"People from all walks of life need someone who has their back during appointments. Everyone needs an easy way to remember and understand the details of their care and a way to share the important healthcare updates with others in their lives," said Dr. Shiv Rao, co-founder and CEO of Abridge.

Rao, who has been a practicing cardiologist at the University of Pittsburgh Medical Center for seven years, decided to start the company after he noticed a few things about the behavior of his patients, including that they would bring a family member or friend to the visit to take notes when possible.

"They would then go home and look things up later to unpack all those notes, and decode all the jargon, and then contact me with more questions to resolve misunderstandings or confusion," he said.

"My wife and I had a similar experience years ago when we were dealing with a rare disease in our family and despite my medical knowledge, it was really difficult to keep the story straight: all the jargon, and the paperwork, and the portals."

The Pittsburgh-based Abridge uses machine learning to give users a transcript of the medical parts of their appointments. It's able to highlight important definitions and takeaways, such as what next steps a patient is supposed to take, or instructions on how to properly take their medication.

All the user has to do is hit the record button during their appointment; the recording is then uploaded to a HIPAA-compliant server, and Abridge’s machine learning algorithms create a selective transcript of the medical parts of the conversation. It will also highlight takeaways from the visit, such as what next steps should be taken and prescription instructions. The app, which has more than 400,000 terms indexed, can be used in routine annual exams, as well as in urgent care appointments and specialist conversations.

"We uncovered four key challenges. First, people want to remember the key details of their appointments but are, in reality, forgetting them. In our survey, we found that those surveyed forgot over 40 percent of their conversations with doctors. Second, people can be stressed and anxious during their visit, which makes it hard for them to listen and focus," Rao explained.

"Third, people want to take an active approach to their care, but it’s hard to keep track of everything. Lastly, people want their family on the same page, whether or not they can come to the appointments or not."

Abridge had 50,000 people download its app during its pre-launch period and was able to identify over 48,000 conversation takeaways using machine learning, meaning the parts of the conversation where next steps were discussed.

Unlike other tech companies, which Rao says often want to replace doctors and nurses, Abridge is looking to help them to their jobs better by augmenting them with technology.

"Healthcare is local. Healthcare is personal. Healthcare is human. We think that tech can bolster those aspects. For example, the relationships between patients and their care team. We want to use bleeding edge tech to help people have better conversations, build stronger rapport, build trust," he said.

"We recognize that it takes both sides to create the healthcare narrative and we are excited to share news in the coming months about new ways for people to share and co-create the health record with their care team using Abridge."

Along with its launch, Abridge also revealed that it raised $15 million across a seed and recent Series A, which was led by Union Square Ventures and hospital partner UPMC. The total funding also includes investments from Bessemer Venture Partners, Pillar, KdT Ventures, and an angel syndicate comprised of Esther Dyson, Aneesh Chopra, and Zen Chu.

The company says it will use the new capital to grow its 16 member team, as well as to improve its the machine-learning technology and its product. For example, the company is also launching a telephone number, 1-877-ABRIDGE, which allows people to call into appointments, even if they aren't allowed in the office due to COVID-19 restrictions. It's also introducing a new home screen, which helps users do things like set reminders for future appointments and view shared conversations.

The healthcare system that Abridge envisions is a system in which people approach their care very differently, due to healthcare becoming more consumer-focused, Rao explained to me.

"We are embarking on a period where tech is layered in to enhance the humanity of healthcare, with Abridge as one of many examples. The current global pandemic has countless negative effects, but one positive is a forced acceleration of both innovation and adoption of technology from telemedicine to how we communicate to how we get prescriptions and more. Nowhere else is human-centric design more important," he said.

That is why the company is working to enhance human expertise. The ultimate goal is to "create ease, transparency and agency instead of making patients feel like products."

"Our vision for the future is to bring more compassion and confidence to every step of a person's healthcare journey. The advanced machine learning offloads note-taking and research so patients can focus on the human connection during doctor visits, knowing Abridge will capture the details of their care so they can stay on top of their health, follow through on their doctor’s recommendations and gain more peace of mind."