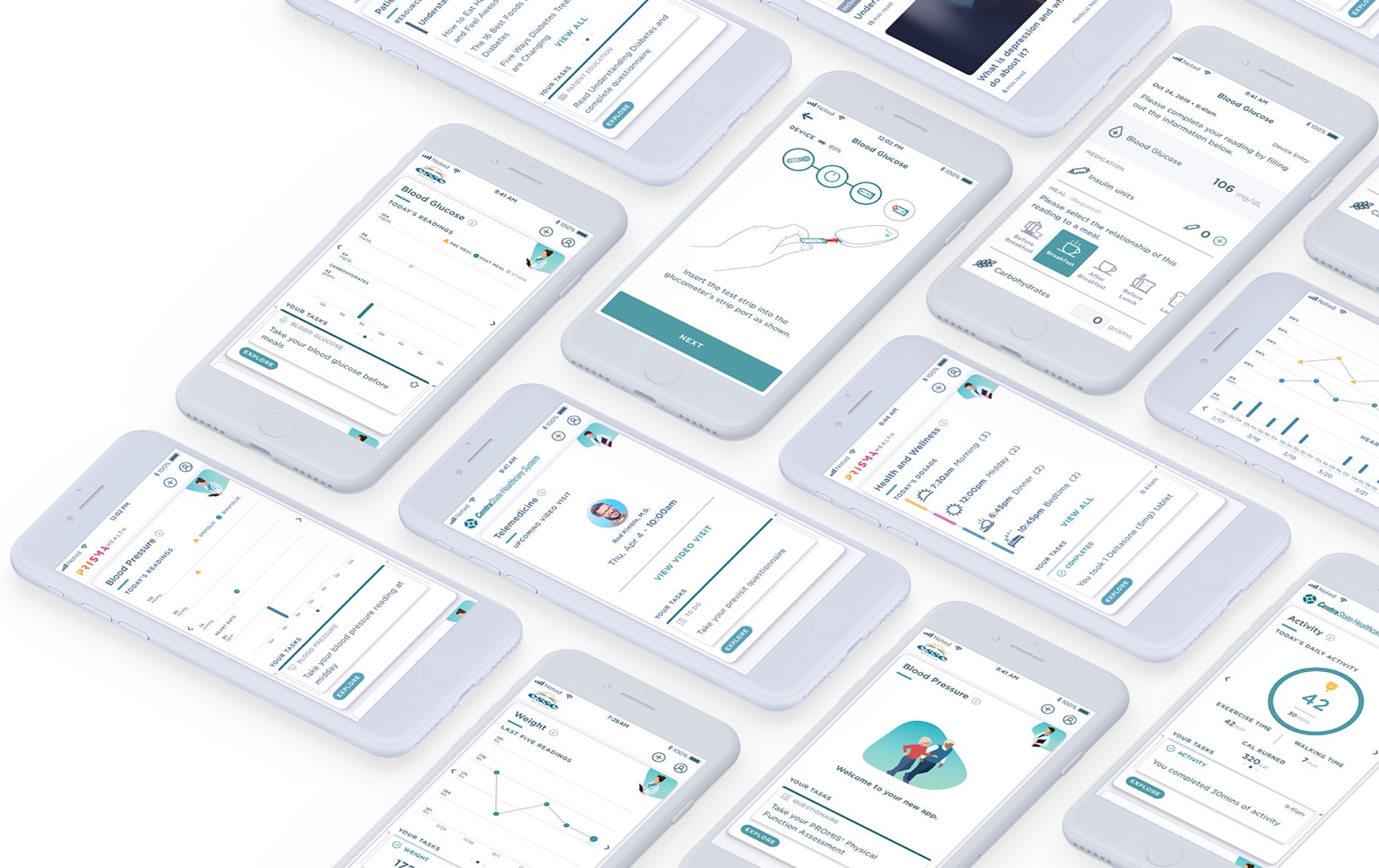 While COVID has accelerated the adoption of digital health technologies, with a push toward telehealth and virtual care, there are still numerous issues that healthcare providers face when trying to implement these tools, not least of which is the cost. There's also the fact that they often have to go to multiple different vendors to provide these services for their patients. All of that makes it difficult for both sides to keep track of, and to take full advantage of, what's being offered.

Noteworth is a company that takes all of these disparate services and unifies them onto a single platform, allowing clinicians to able to more efficiently manage patients’ data and track their conditions remotely. It also lets patients better manage their chronic conditions and receive alerts when urgent care may be needed.

"What we are doing for healthcare organizations is allowing them to change the way healthcare is delivered through technology. We give them the tools and technologies needed to rethink things like chronic condition management or home health or disease-specific things, like oncology or high risk pregnancy, and how that can best be delivered to their patients, how the efforts of their clinical staff can best be optimized to deliver the best outcomes, clinically for our partner organizations as a business," Justin Williams, co-founder and CEO of Noteworth, told me in an interview.

On Thursday, Noteworth announced that it raised a $5 million oversubscribed seed funding round led by Laconia Capital Group with participation from Draper Associates, Frontier Ventures, Techstars Ventures, Wavemaker360, Springtide Capital and others. The company had previously raised funding when it graduated from Techstars, and this round brings its total funding to around $7 million.

Founded in 2015, the Jersey City-based company works with large group practices, as well as integrated healthcare networks, and virtualizes their care delivery model. For example, it recently launched a diabetes prevention program with one of its clients, and has also developed tools for COPD management. The idea is for the doctor to able to press a button so that Noteworth can prescribe a custom solution directly to the patient the same way they are prescribed a pharmaceutical.

"Think of it sort of like a digital doctor's bag, where we've taken tools that otherwise exist, maybe in other industries or across healthcare as individual solutions, and create this unified platform that would allow someone to stitch something as wildly important today. That can be telemedicine into remote patient monitoring, or something as simple as collecting patient input on a survey, so that when you engage a patient with these tools they have everything that they would have had in a normal encounter," Williams explained.

To replicate what Noteworth offers the typical client would need seven, eight maybe even nine different vendors and that, he said, "is a broken experience not only just for the health systems for figuring out workflows, but for the patient."

"Imagine if your bank asked you to deposit through one app, to view your balance through another, to pay your credit card statement through another. Would you use that bank or would you go to the one that’s unified?"

The company, which came out of stealth mode earlier this year, currently has three large clients, which manage around 50,000 lives. The benefits to healthcare organizations and to patients come in three buckets, Williams said, with the first being efficiency. The platform is able to maximize a nurse or a care team, which maybe had 200 patients, so that they can managed 2x or 3x that number by taking away a lot of their menial tasks through Noteworth's technology.

Noteworth is also able to effect the business side of these healthcare organizations by increasing their revenue.

"It's not a secret that revenues and reimbursements and things like that are softening, and the models are changing, and it's a challenge to keep up with that. Noteworth does unlock greater than 10x returns, dollar to dollar, on the the business expense for a lot of the things that we do. We open up new modalities of care that otherwise weren’t accessible for clients, where we simplify very complicated things and make it so a doctor and a nurse can really turn around some massive ROI there," Williams said.

Finally there are the clinical outcomes, in which Noteworth's products engage with the patient and collect information from them. That means either automating some action to be taken or alerting a staff to take action.

"It's engaging a patient at hundred percent of their condition, or this idea of truly treating the walking diagnosis for a patient, where you're able to intervene and avoid things like hospitalizations that maybe could have been averted to titrate their medications. So, the patient can be on the most effective therapy without having to wait until the next six month follow up for that. We've seen clients avoid double digit hospitalizations on very small patient panels for diseases like COPD and CHF and things like that."

In terms of competition for Noteworth, that comes in two forms, the first being companies that offer the same features that Noteworth does, but as individualized services. So, for example, it has  a telemedicine features baked into the platform, and so it compete with a telemedicine vendor who provides only that service. Williams, however, doesn't see these companies as a threat to his company.

The real competition, he explained, comes from traditional administrative tools that are trying to figure out how to get into care delivery. They might be traditional electronic medical record vendors or practice management vendors that are adding in features that "make it seem like they could engage a patient."

"I guess maybe the best, and worst, example of that is things like a patient portal. That's a classic example of an administrative tool being forced into a consumer interaction. What you get from that is not something that's ideal for either party. However, those are largely entrenched organizations, and it's an interesting business paradigm, but the minute someone sees our product they see right through to what we focus on, and what the existing vendor doesn’t," said Williams.

The new funding that Noteworth has raised will be used to expand the team; the company recently grew from 11 to 40 employees, and plans to hire even more until it's between 60 and 75. It will be hiring across sales and marketing, as well as in its engineering and product support side as it brings on larger and larger clients.

The funding will also go toward product development, which means expanding its core services, but also going into new vertical that will take Noteworth "from being purely a tool for engaging the patient, and that allows it to move into, ultimately, what population health aspires to be, and that's the next iteration for Noteworth, is moving into a true real-time population health platform," William explained.

That means, in part, doing more with data, and "evolving our platform into itself being able to be more proactive. Right now we're able to see and assess things but we want the platform to able to to guide and drive certain engagements and behaviors, both on the patient and on the clinician side that acts more like a therapeutic, acts more like an intervention, than an alert. That's a really interesting thing that we're building into," he said.

The company is also looking to expand access, specifically into rural areas, which may not have the same type of resources that suburban or urban environments do.

"We give healthcare organizations the way to develop and flex services into those areas quickly and efficiently and maximize the impact of that. It should make healthcare more effective and more cost effective for those services. An emergency room visit is way more expensive than a primary care visit, and if you can move the primary care modality, or the specialist care modality, into something that is virtual and available to patients that otherwise wouldn't have had that, they would have only had to drive to a critical access hospital or their local emergency room, then that makes a massive impact."

Ultimately, Noteworth's goal is to take healthcare and use technology to really help the doctor and the patient, something that Williams believes recent advancements in healthtech, such as artificial intelligence and machine learning, haven't done. In fact, he believes that these technologies "actually act more negatively to impact real change than they have to help it," by being a distraction from the real needs that weren't being met.

"Without something like COVID, or other things that laid bare the need to truly innovate, the healthcare industry may have still been sitting on our hands a little bit, waiting for the types of changes that could be made and the impact that it could have been delivered from that."

Williams also believes that, so far, technology innovations have only favored a small percentage of people who have access.

"We have known for a very long time that to measure a patient effectively when they're not in front of you, you can manage things like diabetes factors better than you could if you only took a look at a patient A1C lab test when they show up at the doctor's office. We've known that forever," he told me.

"Unfortunately, that technology has only going been present in constant glucose monitors, which only really apply to a very small percentage of patients. So, what we know has been forced into this tech vacuum that makes it inaccessible and addressable to a larger portion of the population. We've done that in a lot of other places."

Noteworth, on the other hand, wants to make that technology accessible to every patient, which can be done if the focus is on change, and not just technology for technology's sake. And that means getting the technology up to speed, ideally to where digital banking and digital shopping are now.

"If technology does its job, that means the average doctor is able to deliver truly personalized medicine to hundreds, if not thousands, more patients because technology is enabling them to do so. What we're building is the platform to do that. And obviously I've invested in Noteworth being that being that thing, but as healthcare in general is, I mean it's beneficial for all of us for us to get there."