The company can detect things like heart rate, blood pressure and stress by scanning a user's face 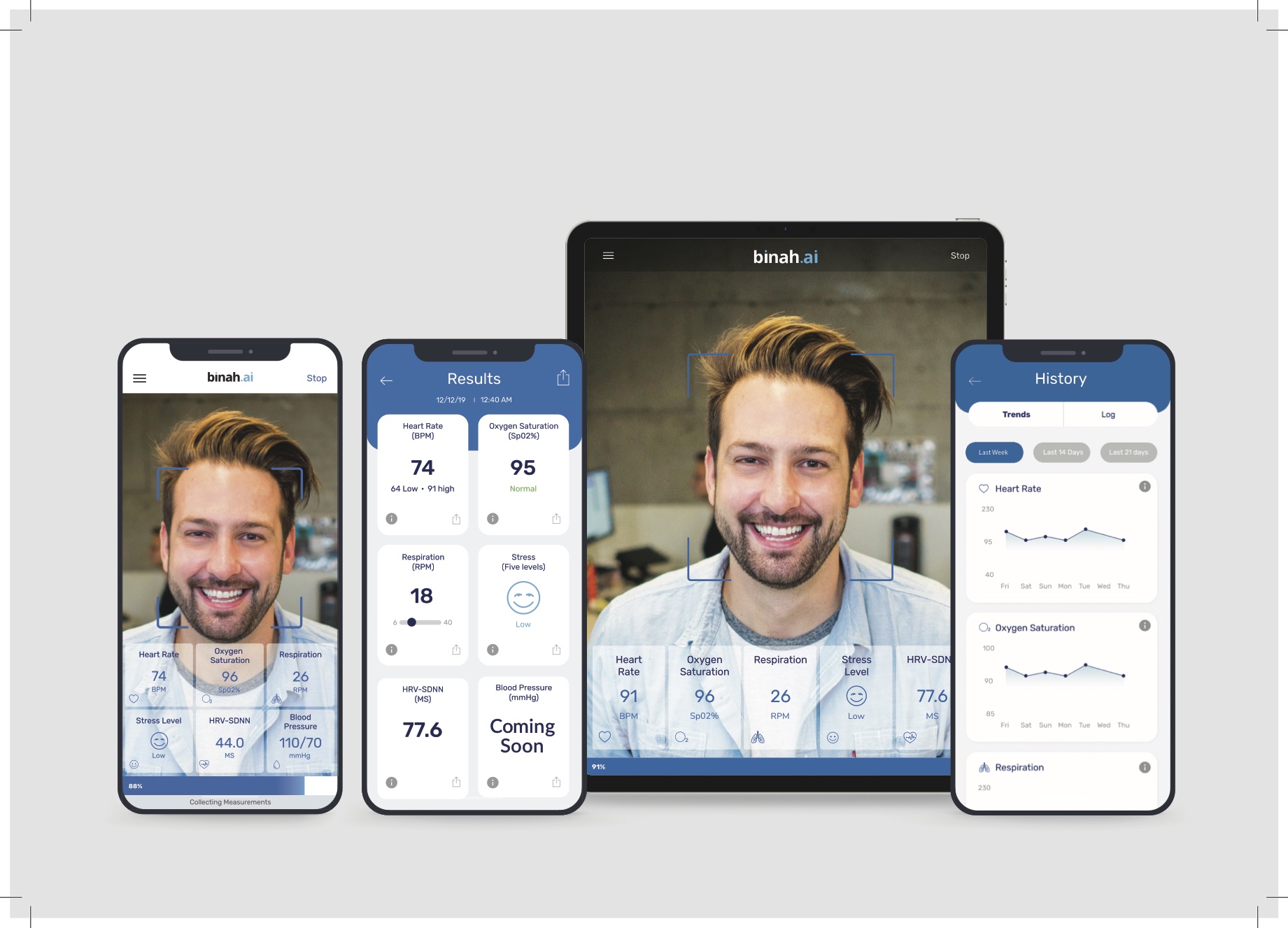 The world suddenly began embracing telehealth in the last couple of months, which is a major change in a very short amount of time; we literally went from around 36 million calls to an estimated one billion calls in just one year. While that's certainly a good thing for companies in the space, it also means that they might not be totally prepared for it. For example, when doing a telehealth visit, if a doctor wants to take a patient's vitals, meaning their blood pressure, temperature, etc, the patient has to have access to a wearable device. Of course, not every patient does.

What pretty much everyone does have, though, is a device with a camera on it, and that's what Binah.ai, a provider AI-powered video-based monitoring tools, wants to use to collect those vital signs, no other device required.

"The technology that we developed allows us, using almost any type of camera embedded device, like a smartphone or a tablet, to extract real vital signs out of the person's face," David Maman, CEO and co-founder of Binah, explained to me in an interview.

Binah's technology has caught the interest of investors, as the company announced on Wednesday that it raised $13.5 million in a Series B round led by Maverick Ventures Israel, along with previous investors Esplanade Ventures, Sompo International, GiTV and iAngels. This brings the company's total funding to $15 million.

Founded in 2016, by Maman, Konstantin Gedalin, Ph.D, and Michael Markzon, the Israel-based Binah (which is the Hebrew word for "intelligence") takes the same kind of technology that is used in a device like the Apple Watch to detect vital, while not needing the device itself.

"If you take a look at the back of any smartwatch, you can see blinking lights. Those kind of sensors actually use a technology called PPG, photoplethysmography. The PPG works in a way that they send a light beam to your skin that can see the tiny color changes of the skin that provides you an indication of the blood flow. By extracting this kind of a PPG signal, they can actually understand your heart rate and other types of measurements," Maman explained.

"What we are able to do is, instead of sending a light beam, we're actually analyzing the light that is reflected from the cheeks of the person to the camera of the smartphone. And we are extracting the same exact signal of PPG, which is referred to as RPPG, or remote PPG. So, we're able to extract the exact same signal that you can actually get with an Apple Watch, just by using the smartphone camera."

It currently has 36 paying customers, and is in evaluation with about another hundred or so. One of its customers is also now an investor: Sompo, one of the biggest insurance companies in Japan, which uses the technology to extract vital signs in real-time from their customers. Another one of Binah's customers is corporate wellness platform BurnAlong, which now includes the technology in its application.

One potential use case for Binah's technology is to help detect those who have COVID through various vital signs. The company is uniquely able to help out in this regard because it doesn't just take a person's temperature, which Maman says is not actually a reliable indicator of whether a person is actually sick. Instead, the company is able to measure things like respiratory rate, heart rate, oxygen saturation, and, together, all of those numbers can be a better indicator of if something is wrong.

That's why the company created its Back To Work platform, to help those who are afraid they might have COVID be assured that they can safely return to work.

"Going back to work is a much wider problem than just whether or not you should enter a facility or not, because if you would like to maintain the safety workplace and the safety of your employees and your customers, you have to make sure that people will not get to work if they actually have been infected. So, as part of the Back to Work platform, every employee,  before they leave home, will be able to assess themselves using their smartphone," said Maman, noting that it's not just COVID that Binah can detect.

"Of course, it can also be that a person has the high likely vitals or numbers, a very high respiratory rate or very high temperature or very low oxygen situation, but maybe just got horrible sickness of another kind."

The new funding that Bihah has raised will be used to help the company expand its team; it currently has 45 employees and will be adding another 20 in the next two to three months, almost doubling its research and development team. The company also recently hired three new people in the US, another person in Europe and a VP of sales in Japan.

The company will also be expanding geographically, and, as such, it has added two new members to its board of directors, both of whom will help it in that regard: Michel Abadi, Managing Partner at Maverick Ventures Israel, and Dr. Sheldon Elman, Co-Founder and Chairman at Esplanade Ventures.

"Dr. Sheldon Elman was actually the founder of a company that was the largest private medical service provider in Canada, which was acquired by TELUS. He's been a physician for the past 42 years, so he's really experienced when it comes to medical requirements, medical accuracy. He also was the head of the ER at the Jewish General Hospital two decades ago, so he’s had practice with emergency experience is also a family physician, and he brings us the experience of penetrating the Canadian market by a huge amount of contacts in Canada," says Maman.

"Michel Abadi from Maverick VC is actually extremely connected in South America and Central America. He's originally from Brazil, and he already helped us make an amazing contact with the largest hospital in Brazil, the Albert Einstein Hospital. He also connected us with one of the largest distributors in South America, also located in Brazil. He's bringing in added value for the company regarding distribution in Central and South America."

Because Binah is now cash-flow positive, he explained, the company was focused on instead finding investors strategic partners that could help it grow, rather than the money itself.

"Today we are already cash flow positive, which means we're making more than we’re spending. We did this round to get strategic investors that can actually help us grow, and that includes Esplanade, they're a major player in the healthcare industry in Canada, and also Sopmo joined as a strategic investor to this round. And for us, we use this round in order to just move faster."

Making healthcare accessible to everyone

Maman has two goals for Binah going forward, the first being to add more vital sign extractions, such as blood pressure, temperature and blood alcohol level, the last of which can be used in applications such as law enforcement, as well as a variety of different industries, including ride-sharing, where it's important to make sure that workers haven't been drinking.

The other goal is to be able to run Binah on any platform; right now it's on Android and iOS, and it working on running on Windows and Linux, as well as creating a browser extension. Taken together, that will allow the company to revamp healthcare access, making it so that anyone with a smartphone can see a doctor.

"Making sure that this technology will run on a billion devices within the next five years, I think that it's doable. Once our underlying technology runs on a billion devices, that means that we've been able to reach an endless amount of users and truly change how healthcare is being consumed. One of the things that made us truly focus on this kind of technology at Binah is that the World Health Organization report shows how half of the world lacks access to essential health services. And using such technology, you're able to get health services anywhere," he said.

"There are countries that don't have a sewage system, but everyone has a smartphone. And using this technology, everyone that owns a smartphone can actually get real medical services. So, our goals are to run on as many devices and in five years to run with over a billion devices and to make sure that healthcare is available for anyone, anywhere." 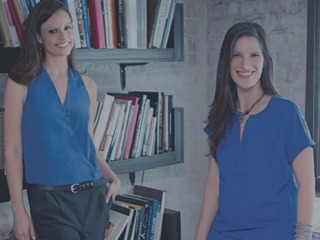