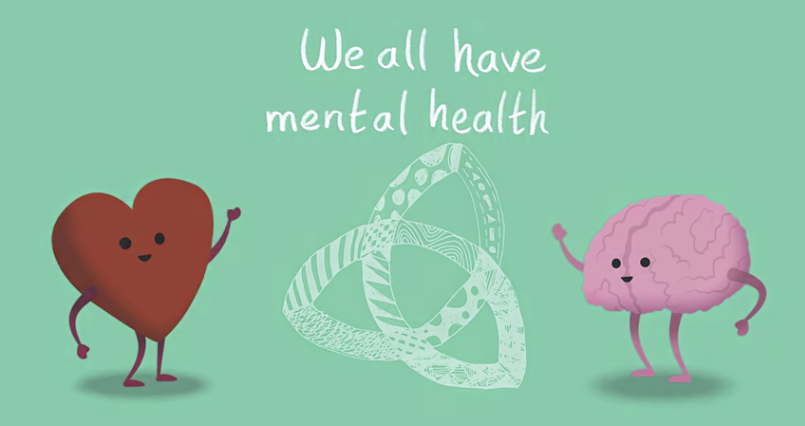 As I’ve been a student of this topic for some time now, I’ve found that many people have little understanding of mental health, largely because they have very little understanding of the human condition and why negative feelings are in fact healthy. Many people I've spoken with often reflexively pathologize a mental condition and attribute someone’s state of mind to a “chemical imbalance” that requires medication.

This is a spurious trope that discourages positive behaviors.

We all fall along the continuum of mental health and are afflicted with psychosocial stressors as a consequence of the responsibilities, and an increasingly fast-paced nature, of life. Some of us are mentally stable, many of us swing back and forth through natural emotional highs [winning the lottery] and lows [losing a loved one] while very few have a mental disorder equivalent to a disease. The definition of disease is any condition that impairs the body’s normal homeostatic processes.

Yet today more and more people fit into the bucket of having a mental disease, and our current short-term approach is exacerbating the problem.

This is due largely to two factors: the expanding catalogue of conditions defined as mental illness to nearly 300 from only 100 seventy years ago and 40 years of incessant marketing of such conditions as diseases that can be treated by medications.

The result: a mental health crisis. “Almost 25 million adults have been taking antidepressants for at least two years, a 60 percent increase since 2010. About 16 million people have been taking the drugs for at least 5 years.” There are 7 million people taking antipsychotics for schizophrenia or bipolar conditions. Rates of bipolar disorder in children has increased fortyfold in 10 years. The number of children with ADHD has tripled and is now more than 10 percent of kids.

To be sure, making diagnostics and treatments widely accessible should increase the number of people found who need help, which helps those theretofore left untreated.  Identifying specific conditions is also a positive step in finding root causes. I don't disregard the value.

The dangerous societal problem, however, is labeling all the conditions as medical illnesses stemming from chemical imbalances that can therefore be treated with chemicals (medication) immediately, when alternative forms of care should be administered and when a different narrative about our mental health could help society better cope.

Consider that there remains controversy around what is considered a mental illness vs normal emotional behavior searching for a name [e.g. orthorexia (obsession with eating healthy), misophonia (hatred of sound), traumatic grief (extended bereavement), parental alienation disorder (favoring one parent over the other)]; studies show antidepressants don’t work half the time; many people taking antidepressants cannot get off them, the effectiveness of antidepressants is overstated mainly because of the short duration of the studies; and that in the case of psychotropics, they cause the chronicity of the disorder.

How did we get here?

Ever since Prozac was invented in 1987, the antidepressant market became a pharmaceutical boon. Prozac was the first drug in a new class of psychotropics called selective serotonin reuptake inhibitors (SSRIs). Prozac changed the practice of psychiatry by allowing depression to be treated and medications to be prescribed by primary care physicians. Sales for Prozac rose to $2 billion annually for Eli Lilly, the maker of the drug, until the company lost its patent protection in 2001. After the antidepressant copycats came in, driving prices down, the market surged to $13.7 billion in 2018.

Conveniently, seven years prior to the Prozac discovery, the number of mental disorders nearly tripled, when the American Psychiatric Association published the third edition of the DSM (Diagnostic and Statistical Manual of Mental Disorders) cataloguing 265 conditions in 1980 up from just over 100 in 1950 when the DSM was first established.

Because antidepressants were more accessible and cheaper than seeing a psychiatrist, the number of “depressed” people increased. Circa 1980s, the US mental illness disability rate was 1 in every 184 Americans. By 2007, that rate doubled to 1 in every 76 Americans, according to Robert Whitaker, author of Anatomy of an Epidemic: Magic Bullets, Psychiatric Drugs, and the Astonishing Rise of Mental Illness in America.

As I said above, it's not surprising to see more people identified with an illness when the barriers to diagnostics and treatment are lowered. Still, the surge in the number of people diagnosed with some mental disorder had been off the charts, despite the fact that the factors considered in the diagnosis were and are still sometimes enigmatic, often ambiguous, and by no means conclusive.

For instance, for the fifth edition of the DSM, Dr. Kenneth S. Kendler advocated the creation of a new category “traumatic grief” for people grieving, supporting his views by saying: “On the basis of scientific evidence, they’re just like anybody else with depression.” Others disagreed arguing that grieving is a natural part of the body and mind healing. “It’s a disastrous and foolish idea,” said Dr. Allen Frances, who chaired the task force that created DSM 4, saying that he worried that sales representatives from pharmaceutical companies would urge doctors to write more prescriptions if bereavement and grief were now considered depression.

Dr. Frances was skeptical over the “overdiagnosis” of medications and wrote a paper titled: “The New Crisis of Confidence in Psychiatric Diagnosis” in 2013 in which he said that “psychiatric diagnosis still relies exclusively on fallible subjective judgments rather than objective biological tests.”

Fallible subjective judgments masked as science didn’t stop the 40-year marketing campaign pushing the narrative that mental illness is a medical condition. To wit, the American Psychiatric Association website says: “Mental illness is nothing to be ashamed of. It is a medical problem, just like heart disease or diabetes.” By promoting this scientific and biological basis for mental health, it was an easier sell to provide a treatment, such as psychotropics.

Yet there are many scientists who’d debunk that statement, showing that there is little if any biological evidence of physiological pathology when it comes to the cause of certain emotions, feelings, and behaviors.

Take for instance the last quote on the slide below. Dr. Ronald Pies, Editor in Chief of Psychiatric Times, says: “In truth, the chemical imbalance notion was always a kind of urban legend…”  Even Dr. Kendler admits that he and his team have “hunted for simple neurochemical explanations for psychiatric disorders and have not found them.” 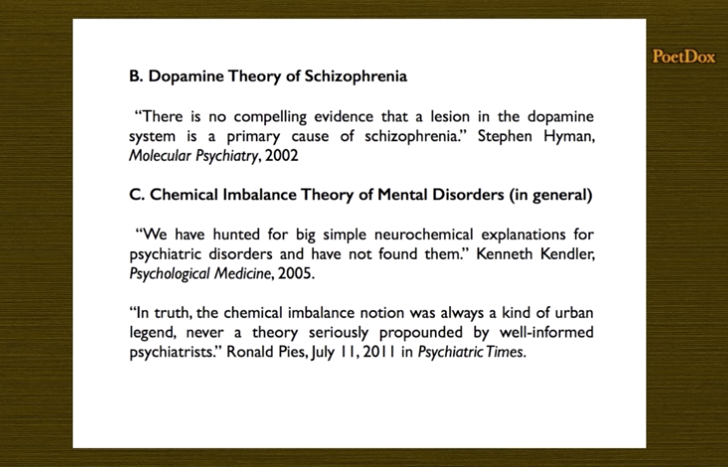 In a book titled: “The ADHD Explosion: Myths, Medication, Money, and Today's Push for Performance,” author Richard Scheffler argues that there are no “unequivocal biological markers” for ADHD and depression, making it difficult to have a conclusive diagnosis.

In 2008, Dr. Martin Harrow, who’s widely-acclaimed for his breakthroughs in schizophrenia research, found that within 2-4 yrs sans medication, patients dramatically improved compared to patients on medications. 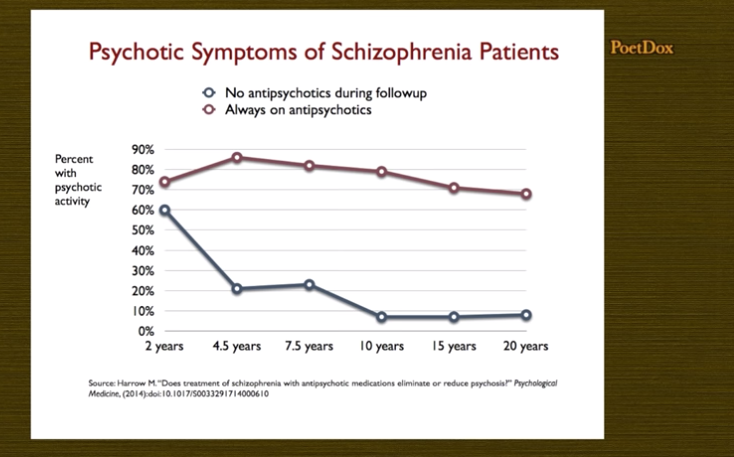 Over two decades, patients off meds continued to improve whereas medication impaired long-term recovery for those on them. As Harrow observed: "I conclude that patients with schizophrenia not on antipsychotic medication for a long period of time have significantly better global functioning than those on antipsychotics."

The more disconcerting evidence that has surfaced is that the medications themselves have caused the changes in brain chemistry.

Studies by Dr. Stephen Hyman, director of the National Institute of Mental Health and a Harvard University professor, showed that psychiatric medications caused the brain to adapt to “maintain their equilibrium” and after a few week’s on medications, a person’s brain function in a manner that is “qualitatively and quantitatively different from the normal state.” 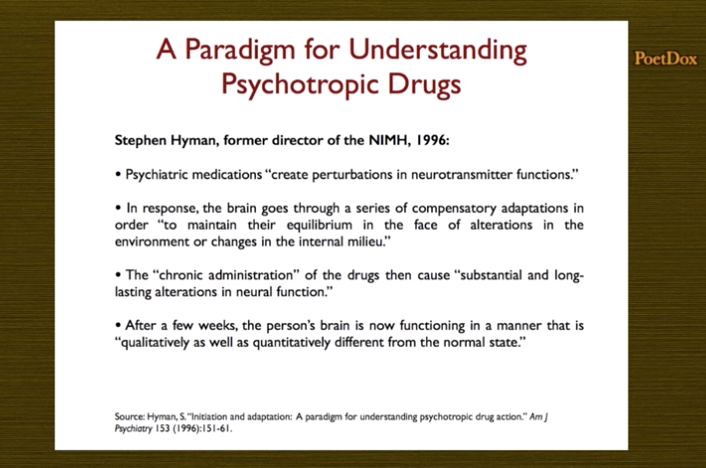 In other words, as Whitaker points out, the drugs "create abnormalities in brain function." They do not fix them, "but instead create them."

We have made significant scientific breakthroughs in understanding our brain and inventing life-saving treatments. But we’re also seeing the downside of these scientific achievements.

The largest of which is not allowing society to understand the human condition and the elasticity of the human mind. Constraints heal the mind and strengthen a person’s resolve to cope. Science has obfuscated what our mind needs by labeling a common stressor a disease that can be fixed chemically.

Dr. Jordan Peterson once said that Gandhi was not a “harmless” man, rather he knew the depths of evil he was capable of, and only until he understand that about himself and humanity could he then transcend to a higher place of peace. Indeed, Gandhi tested his resolve and restraint by rejecting certain food and sex. During those times, I'm sure he experienced negative feelings of stress, anxiety, loneliness, longing, desire, and maybe bitterness and anger. Yet those feelings shaped him. In fact, studies show that denying one's self of pleasure promotes happiness.

Without learning patience, restraint and the release from desire, can we really be emotionally stable? Negative feelings are healthy because they teach us virtues that we can hold dearly for a lifetime that medications never will because they simply can't.

This is one reason I'm excited to be promoting the emerging tech companies innovating in this space and helping people work through their mental health struggles without taking medications. Despite medications being cost-effective and easier to scale, these new software solutions are becoming scalable alternative treatments, without the fatal side effects. You'll meet some of these companies, such as BetterHelp, Ginger.io and Headspace, at our upcoming Future of Mental Health event.

Ping me on Twitter (@bambi100) if you disagree with my essay or have other ways of thinking about mental health. I want to consider how to strengthen my arguments or where my logic or conclusions fall short.