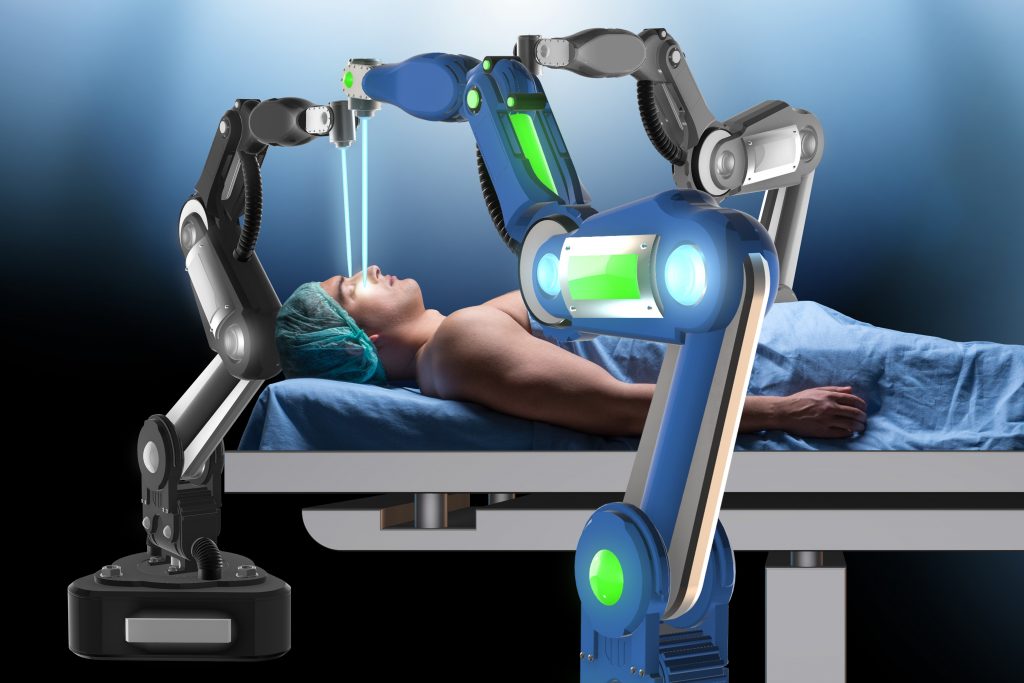 Robots have been used in surgery for decades, with the first robotic arm being used way back in 1985 (that's a year before I was even born). The first FDA-approved system, called da Vinci, came about 20 years ago, using a 3D screen to give surgeons a better look inside, and much smaller arms, allowing for more accuracy.

What is new are the advancements made in their capabilities, thanks to artificial intelligence and machine learning. Robots are becoming smaller, more precise and smarter, with these new technologies allowing them to learn patterns that help them assist surgeons during procedures.

As the robots get better and smarter, there has been a surge in the number of surgical robots being installed; in 2010, there were only 69 of these robots being used globally, and by 2015 there were 382. That's growth of over 450 percent in just five years. By 2020, it's projected that there will be over 1,500 surgical robots in use. 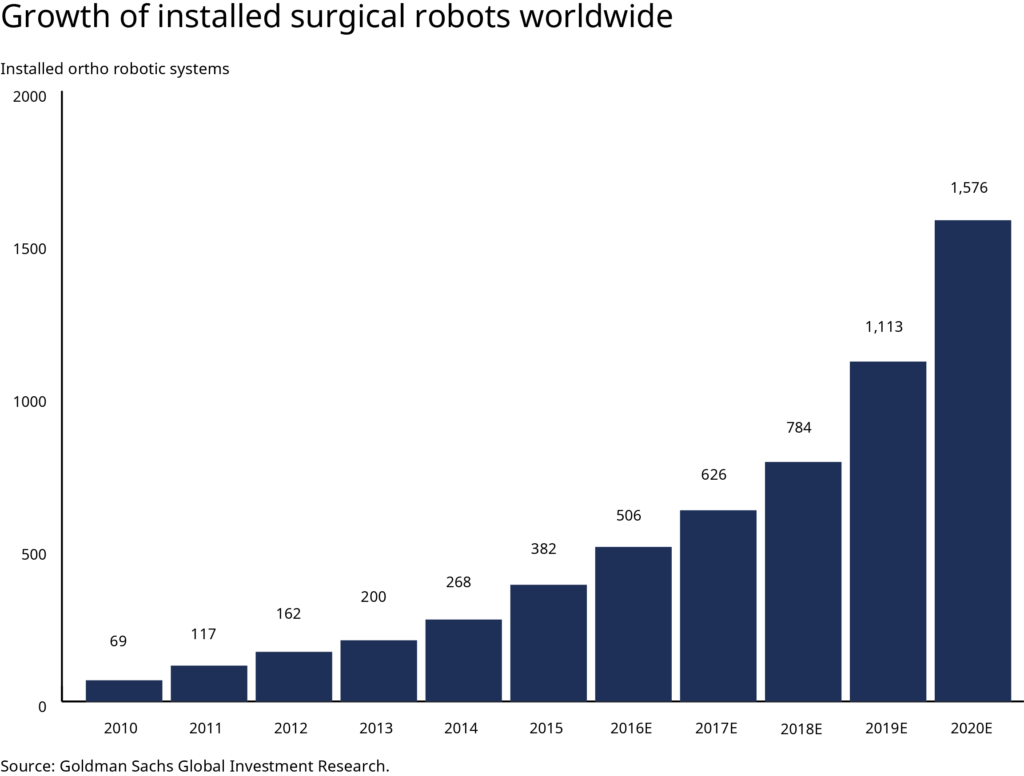 Thanks to these robots, the need for human contact in surgery is going to decrease, with surgeons being able to control them from further and further distances, thereby reducing the risk of infection for the patient.

Even with all that growth, robot-enhanced surgery is still a pretty nascent space. Here are some of the startups that are on the forefront of this emerging technology, and could be the companies that take it to the next level in the years to come.

The first two target endoscopic surgeries. An endoscopy is a nonsurgical procedure in which an endoscope (tube with a light and camera) is inserted inside a body, usually through the mouth or anus, to observe and view internal organs or tissues. There are 75 million endoscopies done each year. The first two companies listed are enhancing the endoscopic approaches to surgery.

Others on this list have designed robotic arms to help assist with surgery, many of which are lightweight and easily transportable, while others have designed systems to give surgeons better visuals during procedures, including one that uses virtual reality.

Description: Activ Surgical is using enhanced computer vision, machine learning and artificial intelligence to provide data to surgeons during endoscopic and robotically-assisted procedures. Its technology can be used with existing hardware already deployed in endoscopies, and is mean to improve information gathering, such as blood flow and spatial data.

Its platform, called ActivSight, will be launched later this year, with the goal of giving surgeons better data and insights.

Description: Auris Health has developed the Monarch Platform, which uses robotics in endoscopy procedures so surgeons can perform procedures using 3D images. The first disease that Auris is tackling is lung cancer. The platform is intended for diagnostic and therapeutic bronchoscopy, a procedure that lets doctors look at your lungs and air passages.

Auris Health, formerly known as Auris Surgical Robotics, was acquired by Johnson & Johnson for $3.4 billion in 2019. J&J plans to use the Monarch platform with its own Lung Cancer Initiative and to support efforts in laparoscopic and endoluminal surgeries; endoluminal surgeries are done using an endoscope, as described above. Laparoscopic surgeries involve using a laparoscope, which is similar to the endoscope with the main difference that the tube is inserted through a small incision.

Description: Founded in 2006, Virtual Incision platform is called MIRA, which stands for “miniaturized in vivo robotic assistant.” It's designed to help surgeons perform minimally invasive surgery and is purposely lightweight, weighing only two pounds, so surgeries aren't confined to a dedicated space, but multiple rooms. That means the device can be brought to the patient, rather than bring the patient to it, so it can be used wherever the surgery is taking place, rather than a big machine that can't be moved so the patient can only use it if they are in that specific room.

The advantage or value is that, rather than needing its own dedicated space, MIRA requires less infrastructure to be taken up and it can be used on a wider set of patients. For example, Virtual Incision's first successful surgery in 2016 was a colon resection, a procedure where robots are rarely used thanks to the complicated nature of the surgery; Virtual Incision was able to use robotics thanks to its small size and portable nature.

The company is a spin-out of the University of Nebraska.

Description: Founded in 2005, Medrobotics Corporation says its vision "is to provide more patients with access to minimally invasive surgery." Its flagship product is the Flex Robotic System, which is a robot-assisted platform that provides surgeons with a 3D vision system that allows them to see hard-to-reach anatomical locations.

The company also has the Flex Retractor, which is used for Transoral Robotic Surgery (TORS), Transoral Laser Microsurgery (TLM) and Flex procedures.

Description: Founded in 2014, Vicarious Surgical combines surgery with robotics and virtual reality so they can perform minimally invasive surgery, so that surgeons can see inside the patient using devices like the Oculus Rift.

Surgeons control the robot remotely, while it mimics their arm movements and motions to perform surgery.

Description: Founded in 2014, CMR Surgical's platform is called Versius, which is used in laparoscopy. Versius is portable and transportable, with individual arms that can be moved around, meaning it can be used in a variety of minimal access surgeries.

It provides flexible instruments, 3D HD vision, and a choice of working positions so that the surgeon is comfortable. Versius was designed to fit into existing surgical workflows, and its console design is meant to  "reduce physical and mental effort" for surgeons.

Description: Founded in 2012, Rob Surgical develops robots for minimally invasive surgery. Its first system called Bitrack, a robotic arm that can be placed in any position around the patient. Bitrack is controlled by a console with 3D HD screen, and which also has a Laparoscope Guided Positioning function, as well as feedback to boost surgical performance. 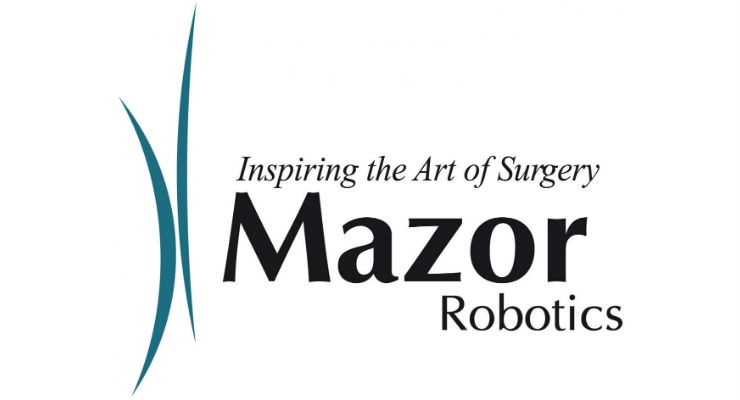 Description: Founded in 2001, Mazor Robotics develops robots for assisting in surgery. Its Mazor X Stealth Edition guidance platform, which was co-developed with Medtronic, was recently cleared by the FDA. It combines Medtronic’s Stealth software and Mazor Robotic’s Mazor X robotic-assisted surgical platform so that surgeons can plan procedures and then use a robotic arm to assist while it's taking place.

Description: Founded in 2009, Robocath works with healthcare professionals to develop robotic solutions for treating vascular diseases such as heart attack and stroke.

Its first solution is called R-One, and it's designed to assist with percutaneous coronary intervention (PCI).

Description: Founded in 2015, KERANOVA design and develops surgical equipment for various ophthalmologic indications involving the anterior segment of the eye.

The company, which holds a portfolio of 10 patents, has already integrated its technology into its first surgical device, which can be used to perform cataract surgery.

Promaxo's MRI is much smaller and doesn't require the patient to go inside the machine; the patient is completely outside the scanner, which means that for example, a patient can scan their knee or their ankle without needing to get inside a big machine. The company is initially focusing on urology, specifically as it relates to prostate screening, with plans to eventually incorporate its MRI technology into surgical procedures.

The company has 61 patents on its technology and is working with research partners at Stanford University, the University of Wisconsin Department of Radiology, Mass General, Vanderbilt, Harvard and others.