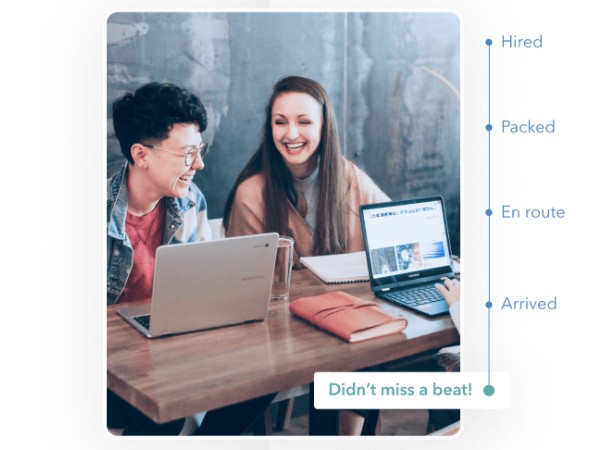 As most of you likely know, moving is an incredibly terrible and stressful process, with so many different parts you have to keep track of it can make your head spin. Moving to a new city, where you don't know anyone, is even worse. Combine that with starting a new job, and it's hard to imagine anything more stressful than that.

That's the problem being solved by Shyft, a company designed to make the moving process smooth, not only for the new employee but for their employer as well.

"The problem has two sides: one is the corporation side, which is the war for talent. They’re looking to bring on the best and brightest, often when they do they’re going to have to relocate them, and they’re very much interested in making sure that person is relocated seamlessly and up and running for their new job," Alex Alpert, Shyft's co-founder and CEO, told me in an interview.

The timeline for these employees is often very tight, he noted, with around 60 percent of corporate transferees moving within three or four weeks.

With Shyft, the employer allocates a certain amount of money for an employee to use in their relocation; the employer then downloads the app and they will be connected to a move coach, who essentially acts as a personal concierge. The coach carries out a needs assessment, which means identifying what types of services each person is going to need. If they are shipping their things, Shyft takes a video of the items they’re moving, and then provides the employee with a full move plan, which includes housing, moving and lifestyle options that are a good fit for that person’s budget.

"It’s kind of completely reserving the transaction; instead of starting with the services available and saying, ‘This is what’s available,’ we’re looking at how to create an amazing customer experience and then provide the kind of services that this person needs," said Alpert.

"You can think of Shyft as an operating system for the relocation industry, where we integrate all of the verticals that are necessary before the move and after the move."

On Tuesday, Shyft revealed that it raised a $15 million round of funding led by Inovia Capital, with participation from Blumberg Capital and FJ Labs. This latest funding brings Shyft's total funding to $20 million, and the company plans to use it to build out its team, doubling its 250 headcount in the next year. Part of that will involve growing its engineering team to build out its platform.

The company will also be using it to expand globally, specifically in Asia; the platform is currently available in 83 countries around the world, with most activity coming from the U.S., Europe, and Australia.

The origins of Shyft

Alpert has long roots in the moving business, going back to his childhood in small-town West Virginia, where his family ran a hardware and furniture store for three generations, meaning he grew up sweeping out warehouses and driving trucks and moving furniture with his father and uncle.

"It gave me a good rooting in blue-collar mentality and generational businesses, which make up a majority of moving companies," he told me.

During college, Alpert dropped out of NYU to become a truck driver, after which he started an international freight forwarding company in his 20s, and then worked for some of the largest van lines, like Wheaton and Beacon, where he saw the inefficiencies that exist in the moving space.

"Basically, during that whole process what I saw was that there’s just so many opaque practices in this industry. When you get down to the crux of it, it’s all about pricing. Pricing in moving is so much like healthcare: once you’re in, you’re totally locked in, you have no idea how much it’s going to cost, and it’s a service that hits people at the crossroads of their life. The industry likes to say, ‘We meet people at the Ds: death, divorce, and diamonds.’ The folks at Beacon were super old school, running things on paper, completely not interested in adopting technology and creating transparency, but I was," he said.

The initial idea for Shyft, which was originally called Crater before changing its name in 2018, was to allow consumers to video what they need to move, allowing the company to take that information and produce an estimate using an algorithm. That software is still being sold to moving companies around the world, and it's able to predict the volume and weight with 90 percent-plus accuracy.

The company shifted focus to corporate relocation when Alpert noticed a gap in the market when it came to lower-level employees who were being asked to move for new jobs.

"There are two halves of corporate relocation: there’s the high-end, who are C-level executives, who are getting very robust packages that can include home sale, home purchase, language and cultural training, expense management, taxes, immigration. For the most part, it’s a decent service level. But what had happened over years is that corporations got smart, and they said, ‘You know what? We’re just going to give a flat fee to these lower-level employees to save money'," said Alpert.

"Also, because these employees were now Millennials and Gen Z, and they didn’t want the type of typical services that the Baby Boomer generation were looking for. And that’s where we saw that there was a gap in the market and a tremendous opportunity to take this technology that we built and to be able to apply it to this problem."

Creating a broader pool of talent

Shyft's customers can range from Fortune 500 companies to small and medium-sized businesses, and part of its value proposition is giving its clients a broader pool of talent to choose from around the world.

"The normal behavior is in corporate relocation is you’ve got recruiters who are going out looking for talent, and because they don’t understand the cost of relocation, they look in very specific geographies," said Alpert.

"When we walk into a business that’s growing or expanding, we can tell them that, with Shyft, we can provide them with quick cost estimates to increase their addressable candidate audience by 3x to 5x, because now they can look all over the world for talent."

In addition, there's also cost savings, though that can sometimes be difficult to calculate, Alpert admitted, since companies often don't know what they are spending currently.

"Companies are operating blind today. They don’t understand what the right amount of money is and, frankly, they’re limited in some of the questions they can even ask that transferee. So, we’re definitely involved in helping companies to aggregate data and understand how people are spending money and deciding on what’s the right amount for that person."

Ultimately, what Shyft really provides for them, he said, is the assurance that it will make things easy enough for the new employee, so that they can get up and running at their new job as quickly as possible without having to focus on the stressful part of the moving process.

While Shyft benefits employees and employers, it's actually a three-sided marketplace, with the third leg being the moving companies it works with. For that side of its business, Alpert said, Shyft is able to bring them opportunities that they wouldn’t normally be able to see by giving its customers access to a network of moving companies they can use. Shyft also gives moving companies access to the tools in its legacy SaaS product, such as its video algorithm.

"I’ve always stayed pretty close to my moving roots, and at the bottom of the labor pool is where you find movers. They’ve been screwed over by technology and companies for a very long time. So, we’ve always tried to build a win-win for them, where they can see increased margins, increased profitability," said Alpert.

"Today, moving companies spend an enormous amount of money on sales and marketing, and that’s not their core competency; their core competency is logistics and warehouses and trucks and labor. So, working with Shyft is enabling them to focus on the things that they’re great at and allowing them to relieve some of the pressure of surviving in today’s modern market."

Shyft currently has over 200 plus companies as customers, and its technology has been used in over 200,000 transactions. The company expects to double its number of transactions year-to-year in 2020.

Turning Shyft into a verb

Shyft is growing quickly, and is already has a profitable per-transaction business, Alpert told me. Part of its goal going forward is to make moving as simple and easy as Uber made ordering a taxi.

"We’ve got a generation of people who have grown up with the ability to press a button and a cab shows up, or they get their groceries delivered, or they order a massage. Why can’t relocation be that seamless? It just feels like a process where you’ve got multiple applications, multiple vendors, sourcing estimates that aren’t an equal comparison," he said.

"So, the vision here is tele-transportation, at some level, but along the way the way to get there, can we create an experience as simple as picking up your phone, opening the Shyft app, clicking a button and seamlessly being transported anywhere in the world?"

Longer-term, though, Alpert believes that Shyft has the ability to build itself into a brand, making the company synonymous with relocation.

"When we look at the market today, there’s no distinctive brand out there that people can look to and say, ‘I Shyfted.’ So, we want to turn this into a verb. We want to get moving away from being one of the top three most stressful things in life and provide rad customer service."