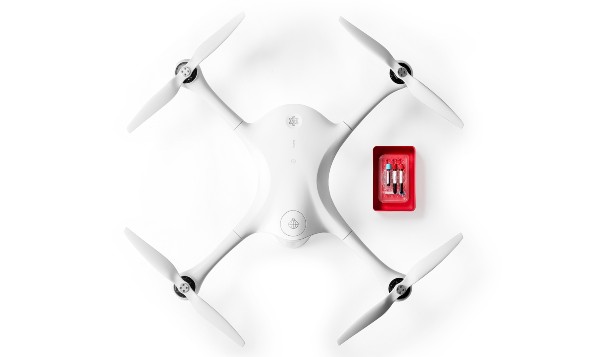 Drone delivery is a fast growing market, with 45 countries that now implementing, or are planning to implement, drone delivery services. It's a market that's expected to be worth over $90 billion in a decade. Of course, getting your stuff delivered from Amazon by a drone is kind of cool, but it's not essential; meanwhile there are certain spaces where this technology can be much more impactful, i.e. healthcare.

That's why drone delivery company Matternet has chosen to focus on that space in particular: the company works with hospital chains, providing them with drones, software and landing infrastructure, so they can to ship things, such as blood samples, from one facility to another within their campus, group or system.

"The opportunity in healthcare is much bigger in terms of the impact you could have per delivery. Of course, the scale is much smaller than e-commerce, but if you think about what you can accomplish by delivering much faster and much more predictably within healthcare, the impact is just huge. It has the potential to really change how hospital systems operate, and how quickly patients get care, and the quality of that care," Matternet CEO Andreas Raptopoulos told me in an interview.

For example, if a chemo patient goes to the hospital and they get their blood taken, they can sometimes be sitting there for three or four hours waiting for the results to come back, so the nurse will knows whether or not to adjust their medication. By delivering the sample via drone, that wait time might be reduced to just one hour, which will therefore have an impact on the patient's health.

"It’s a very time sensitive operation, and if we go in with a transportation method that can really reduce waiting times, I think it has this huge impact," he said.

On Wednesday, Matternet announced that it received an undisclosed amount of funding from McKesson Ventures, a strategic venture firm backed by pharma company McKesson Corporation.

The amount of funding was kept secret, Raptopoulos told me, because this round is meant to be a strategic investment, one that will allow Matternet to work with McKesson, while also setting the company up to raise a Series B round of around $30 million starting next month. One thing would tell me is that it puts the company's total funding to over $30 million total.

"We believe this will unlock way more opportunities within the healthcare supply chain. Being a technology company, and having this intense focus on healthcare, it’s absolutely critical for us to be able to penetrate more verticals within healthcare distribution. Right now we’re just in one: hospital to hospital; there’s a few obvious ones that we can go to next, like how do you supply into a hospital? So, do you connect a McKesson distribution center to a hospital facility? After that, how do you connect a lab that supplies a hospital? So you can have a hospital connect to a Quest or LabCorp. Then you start getting into B2C problems, like how do you deliver prescription medicine to a patient?" he said.

"These are the ones that we’re looking at right now, but we believe there are many more problems, like critical delivery problems, within the supply chain of healthcare that we don't yet fully understand, and we hope that working with McKesson, we can uncover those and apply this technology there to benefit other segments of the supply chain."

Matternet began operating in Switzerland in 2017, and how has now done 1,800 flights over Swiss cities, including Lugano, Bern and Zurich. It launched operations in the United States in March of 2018, along with a national partnership with UPS. While Matternet is currently live in only one hospital system in the U.S. right now, the WakeMed Raleigh Campus in North Carolina, where it successfully flown more than 1,500 flights and delivered nearly 8,000 lab samples, UPS has announced partnerships with systems such as Kaiser Permente and the University of Utah Health, where it is using Matternet's technology for drone delivery.

"In 2020, our target is to be at more than 10 hospitals, and these are some of most important regional hospitals in the places that we go, so we expect our impact to grow over 3x in 2020," said Raptopoulos.

While drone delivery as a space has been heating up, there are still very few companies who have put an emphasis on the healthcare space; the only other one that Raptopoulos mentioned was Zipline, a company that has raised $233 million and is currently valued at $1.2 billion. The big difference between the two companies, he said, is that Zipline is better situated for rural deliveries, while Matternet is designed for urban areas.

"Their model is quite different from ours; they set up a distribution center and deliver that with an aircraft that goes to a location that drops a package that is parachuted down to the ground. So, it works well for rural applications," Raptopoulos explained.

"Our technology can do bidirectional transportation between more tight environments and business facilities. So, when you have hospital A in Palo Alto and you want to ship something to Redwood City, most people that we’re talking to want a system that allows them to have very precise delivery from point A to point B, they want an end to end process to have a very strong chain of custody, so they don't want the package being left out or dropped or anything like that."

As such, part of Matternet's solution involves what they call a Station, which the drone can land on, deposit the payload, and have it secure before it gets picked up.

While new funding and partnership with McKesson will allow Matternet to go deeper into the healthcare vertical, as Raptopoulos mentioned, the company's vision is larger than that: it eventually wants to transform transportation as a whole.

"We think that drones represent a new mode of transportation. We believe that will enable a new layer of aviation that will be transformative for how we see aviation and what it does, and also what it means for industry," he said, acknowledging that that goal is likely a long way off by comparing where drone technology is now to an Apple II computer.

"Fundamentally, Matternet, our vision is that drones will enable a new paradigm of transportation, and that paradigm is going to be networks of flying vehicles that will be delivering things back and forth in a fully autonomous way, and it’s going to be way more efficient and way faster, way cheaper than current transportation modes," said Raptopoulos.

"At Matternet, we want to show how this new paradigm can be applied to healthcare successfully. Over the next three to four years, we’re going to be serving tens of hospitals with UPS, and other partners. Once that is commonplace, we would see that application being applied elsewhere in other places that we can bring the environmental benefits the technology can bring, and even customer convenience as the technology becomes mainstream."