The company answers patient questions using AI, and only brings in doctors when they're needed 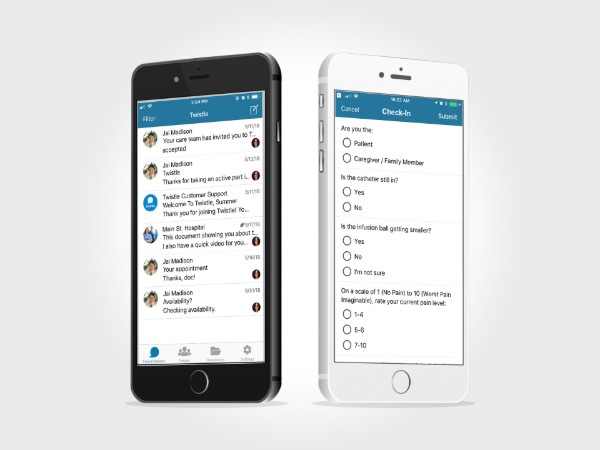 The relationship between doctors and their patients is changing thanks to technology that allows an ongoing conversation between the two sides to happen outside of the doctor's office. People want to text their doctor, video chat with them, and often seem to feel like they should be able to 24/7.

While that's great for the patient, who can get information faster and easier than ever before, it's not always so great for the physician: a survey done by the American Medical Association found that 43.9 percent of U.S. physicians exhibited at least one symptom of burnout in 2017. Though that number has been coming down (it was 54.4 percent in 2014 and 45.5 percent in 2011) it is still awfully high. Something has to give.

Twistle is a company that has come up with a solution to satisfy both sides of the equation, allowing patients to get the information they need while also taking some of the burden off of physicians: automate those conversations using artificial intelligence.

"Most of healthcare doesn’t happen in the in person context, when a patient is in a physician office or inside a hospital; most healthcare happens when they are at home and away from the physician. Historically, the hand holding of the patient when they are not in the presence of their care team has been minimal, andd reactive at best. ‘If you have a problem, call me’ and then you play phone tag with your care team, that’s how it typically happens," Kulmeet Singh, CEO of Twistle, told me in an interview.

"That was the problem we are trying to solve: how can patients feel more connected with their care teams while care teams are overwhelmed right now? How can we leverage automation to make that connection and conversations more efficient so that the care teams can fill this important need for patients to make them feel more connected and supported, but not have to do it by spending time on the phone or in a Skype or video call?"

The way the company accomplishes that is by having its technology automate most of the communication on the care team’s behalf, only pulling in the care team when they are actually needed, freeing up the physician and also giving patients the information they require.

On Tuesday, the company announced it raised $16 million in Series A funding led by growth equity firm Health Enterprise Partners and MemorialCare Innovation Fund, the venture arm of the MemorialCare Health System.

The company, which was founded in 2011, automates everything from routine communication to information gathering and education activities. The platform automatically checks in with patients and, based on how they respond, will provide them with follow-up information, questions, and empathetic messages.

The company typically works with large health systems, meaning those that operate at least five hospitals; those systems already have what Singh refers to as "existing healthcare upstream technology," which might be a electronic health records system, a population health system or a CRM platforms. Those platforms are what trigger the conversation with the patient.

"If a patient got scheduled for a visit or a surgery or they got discharged after a heart failure appointment, some event happens, that event then triggers us and says, ‘This is the patient, and this is how the patient chooses to communicate,’ which could be though text messaging, a phone call, a variety of different channels," he said.

Twistle is channel agnostic, and will send messages in the manner of the patient's choosing, either through native applications, text messaging SMS, browser web application portal, recorded phone messages or embedded directly within the EHR or patient portal.

"We are trying to mimic the consumer experience; we have a very patient-first value inside of our culture, which is that requiring a patient to download an app or to log-in to a portal doesn’t always make sense," said Singh.

"We’re not prescriptive on how the patient communicates, we let them communicate the way they choose. They choose the channels, we’ll send the conversation into that channel, and it’s a bidirectional conversation. We just rely on messaging rather than the patient having to learn how to use a new app or a new user experience, they know how to use messaging, which is pretty much the default, then they can get a reminder, they can send a video, they can see a video, they can answer questions, and then based on questions that they answer they can get follow up automatically."

Right now, the company is in 15 to 20 hospital systems, including Trinity, AdventHealth, and ChristianaCare, and it currently reaches hundreds of thousands of patients. Twistle helps those those hospital systems increase revenue, standardize care processes and reduce costs, specifically by reducing readmissions, reducing patient length of stay and increasing patient volume for those health systems that are still focused on patient acquisition.

Thew new funding will be used, in part, to allow the company to expand its resources in the provider and life sciences markets.

"We’re selling to other large health systems, but we are also selling to the life sciences industry. So, we’re selling into large pharmaceutical companies or medical device companies, where they are trying to provide hand holding to their patients so they adopt those devices, or these are complicated therapies where the  patients have a lot of side effects and the patients need to be supported to make sure that they remain adherent and compliant with those medications or those therapies. These are often provider administered therapies. So, expanding that part of the segment is an important part of where these funds are going to be going," said Singh.

The money will also be invested in the artificial intelligence and automation part of the platform, and to build out the product, specifically around bench marking, meaning comparing patient satisfaction in a specific health system to the overall satisfaction rate, as well as leveraging the data the company has collected to improve its natural language processing techniques.

The philosophy as Twistle is very patient-first, Singh said, so going forward the company plans to focus on advocacy for patients, and other ways to make sure that "patients feel supported and confident when they unwell is generally the philosophical vision that we are pursuing."

"Our vision is that every patient in the world feels connected, supported and reassured. There’s seven billion people on the planet, and in my ideal state we’re touching all of them. In some ways, visions are your north stars, that doesn't mean you reach north star, but that’s generally what our aspiration is," he explained.