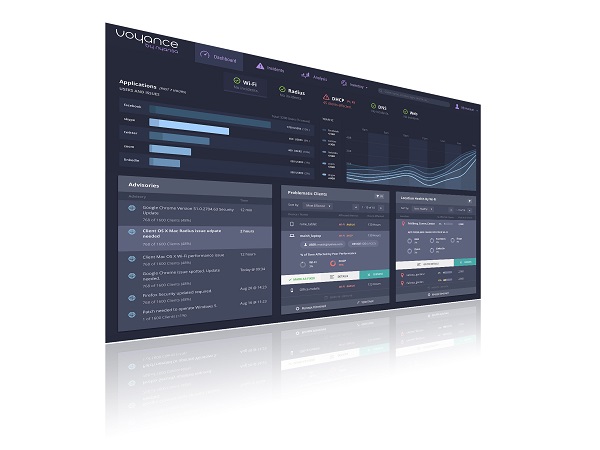 With the proliferation of connected devices, there's a greater need to be able to get a good look inside a device, to understand how it works, and, if it stops working, what exactly the problem is. Nowhere is that more important than in healthcare devices, where the difference between something working correctly or not can literally be a matter of life and death of the patient.

That's why GE Healthcare announced a partnership earlier this week with Nyansa, a provider of IT analytics software technology. The company allows its clients to analyze device transactions across an entire network and to get greater insight into what exactly is causing a device to malfunction, so it can more easily be fixed.

As per the partnership, GE Healthcare will be distributing and supporting the Nyansa Voyance AIOps platform for its health care customers; that means it will be including Nyansa's software in the devices it sells to hospitals. The two companies will be integrating the GE's real-time patient monitoring network, called CARESCAPE, with Voyance.

David Callisch, Nyansa's vice president of marketing, spoke to VatorNews about his company's solution, how GE will be incorporating it, and what this partnership means for Nyansa's future.

VatorNews: Tell me about Nyansa. What is the problem that you have identified and how are you solving it?

David Callisch: We’re based in Palo Alto, and we’re about three years old. We’re venture funded by Intel and Formation 8. We’ve been through two rounds of financing and raised $27 million.

We launched a product about two years called Voyance; it’s a full stack network analytics tools for access networks. So, it’s basically a cloud-based software system, as well as a private cloud appliance that sits on premises if you don’t want to use the cloud. What it does is it takes in traffic from your network and it measures and analyses every client transaction, every device transaction, on the network from the time they associate with the WiFi access point to the time they get an IP address to when they resolve a DNS query to the time they hit an application, and everything in between. What we do is we analyze and stare at every single client transaction in real-time, and over time, with the purpose of trying to figure out where problems lie that are impacting the performance of a device or a user. That’s all we care about. Where is that problem manifesting itself? What is the root cause of that problem? How do we fix that problem? And what’s the scope of the problem? Is it just a single client or is it a systemic issue that impacts thousands of clients?

We’ve been doing that successfully for a couple of years, and we've sold into some big accounts like Sam’s Club, Home Depot, Stanford University, Uber and Tesla. Large companies. It’s a big data, network analytics solution, so obviously the more data we have to analyze the more value we provide.

Healthcare has been particularly challenging because of IoT. About four months ago we brought to market an IoT security solution that does kind of the same thing but for IoT devices, like infusion pumps or EKG machines, things that clinicians and staff use. We check to see if there are potential threats on the network, meaning are they talking to the right destination host? Are they behaving properly? We figure out what’s normal behavior for a device, or a group of devices, and then if we see any abnormalities we allow you to fix them.

VN: Walk me through the partnership with GE Healthcare. How will this work?

DC:  We met GE at HIMSS at couple of years ago, and it’s taken that long to come to market with them.

GE sells millions and millions of dollars of equipment into hospitals, 3,000 plus hospitals across the U.S., or probably worldwide. They want to be able to provide, I’m going to use a buzzword here, operational assurance; they want to be able to prove to their customers they their equipment is performing properly and to be able to troubleshoot that problem across the network. They’re reselling our Voyance package under the GE brand to their customer base, for the purpose of ensuring that their devices are working properly, and to do that you have to have visibility into the network. We provide that.

Different devices behave differently with networks and a lot of these IoT devices, like telemetry machines, that are purpose built for one function, they don’t necessarily have robust networking or security tacks in them. So, they might not connect or behave properly with any part of the network. To figure that out you have to be able to know, you have to be able to prove it, and quantify it. That’s what we do.

You can also use the tool to figure out if these devices, whether they’re mobile carts on wheels or whether they’re fusion pumps or EKG machines, these things are expensive and one of the things that hospitals and healthcare guys want to know is, are these things being utilized? If a hospital comes to me and says, ‘I need 24 more mobile carts,’ I can look at the tool and say, ‘There’s 20 carts that only get used 1 percent of the time.’ It’s a useful tool not only to troubleshoot device problems across the network but also to justify infrastructure spend.

VN: So GE will be putting your software into their devices and selling it to their customers?

DC: They’re not going to force their customers to use it, they’re going to now have in their arsenal the ability to offer a network analytics solution that spans the network and helps ensure that operation assurance for these devices. GE sells a lot of devices in terms of top line dollars to their customers, and they want to be able to make sure, and to guarantee, that their devices are behaving properly and this is a way for them to do that. They can provide their customers not only peace of mind but the ability to optimize the investment that they’re making.

VN: It said in the press release that “GE Healthcare and Nyansa will collaborate on product and technology roadmap to bring to market new network-optimization services during the course of the multi-year agreement.” Talk to me about what that mean and what that roadmap looks like.

DC: A lot of these devices, not just GE devices, they talk in proprietary protocols, so the way they communicate telemetry information, for example, is proprietary. So, there’s work that has to be done on on our side to be able to ingest that data and to be able to understand what it means and then to be able to put it into our system so that that data, for that particular device, can be correlated with everything else that we look at. So, if you have a problem with a device, you want to know whose fault it is. Is it the device’s fault? Is it the network’s fault? Is it the wide area network? Is it an application? To do that, we have to know how that device talks to the network and behaves on the network and then we have to know how the network is dealing with that device across the entire stack. That’s the kind of work we have do with them.

It sounds easy but it’s not, because we’re talking about very sophisticated software algorithms that are literally parsing this traffic to measure and analyze how a device is behaving with something on the network.

VN: Are there plans to include your software in other GE products that aren’t healthcare related?

DC: I have no answer for that because, right now, we have a contract with GE Healthcare so we care about GE Healthcare devices. Beyond that, if there’s a need for it, and a financial motivation, anything is possible, but right now our focus is completely on the medical devices that they sell into hospitals.

VN: What does a partnership with a company like GE mean for Nyansa? What does it say about your company?

DC: It’s huge for us. Think about it; we’re a startup in Silicon Valley, we’ve been going for two years and we get a billion dollar company saying, ‘This product is useful enough for us to resell it.’ It’s a channel to market that we don’t have and could never have unless we invested millions and millions of dollars in sales people.

Startups look for leverage points and GE Healthcare has an established base of thousands of hospitals, all of which have the same problem: they’ve got a bunch of mobile devices that they don’t know how they work on the network. They want to be able to solve that problem for their customers. As a small company, we sell into healthcare, we’ve done that successfully, but to do it on that scale, and to do it as fast as we can do it with GE Healthcare, it puts us on the map.

DC: Profitability. When you start to make a profit then you can hire more people, you can sell more stuff, you can grow, and we’ve been doing that as a private company for two years. So, we’ve been doing up and to the right, but this gives us a trajectory that’s really potentially awesome for us. So, success for us would be able to penetrate and make GE successful in selling our product into their 3,000 hospitals. Then anything can happen.