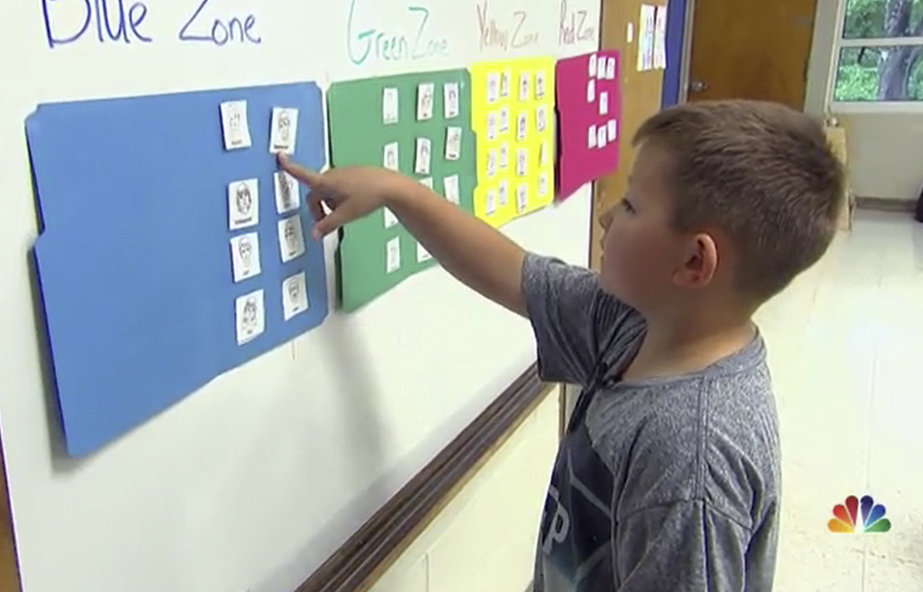 Recently, my husband and I attended a school meeting to learn "The Zones of Regulation." The program helps parents encourage their children to be aware of their emotions and manage them accordingly. It was recently instituted at our son's school for teachers to give children the tools to cope with anger, stress, anxiety, uncertainty -- something many schools (having a lot of knowledge of this since I have three older boys) do not bother teaching for a number of reasons, not the least of which is a belief that parents should be the ones stewarding their children in this area of emotional intelligence.

I agree. Parents should be teaching their children this.

In the old days, many parents did. In the old days, more of them went to church and often received community support during emotionally stressful times. The church then, and to this day, encourages people to be vulnerable and share their innermost troubles. It's an extremely cathartic and therapeutic way to exercise emotional intelligence.

The consequence therefore is a societal inability to cope that's now a mental health crisis seeking a false savior (or saviors), typically in medications.

(Join us April 4, 2019 at UCSF to discuss the Future of Mental and Behavioral Health. REGISTER HERE).

Nearly 50 percent of doctors overprescribe medications to children, causing them to be addicted later in life and many kids are misdiagnosed, said Dr. M. Scott Applegate, M.D. of Lincoln-based Children First Pediatric, adding, "the result is countless young adults who are convinced they need these medications simply because they’ve been on them for so long."

If you disagree since these are prescribed medications that seem to be working, consider this: At one point, painkillers were considered non-addictive. Today, their abuse of them is the No. 1 leading cause of death for those under 50 yrs old, with 130 people dying each day. The CDC estimates the economic burden to the country to be $78.5 billion annually.

A recent 2019 study showed that people are now more likely to die of prescription drugs, such as Vicodin, than in a car crash. The opioid spillover effect is more emotionally-unstable people.

Hence why Zones is being adopted across the nation from Alameda, California to Cape Cod, Massachusetts, as schools are stepping in where parents haven't. East Falmouth  Elementary school adopted the Zones programs to help students whose parents struggle or died from opioids. When they go to school, the kids aren't told to put their heads down and get to their math and reading work. Rather they meditate to music and relax. They learn to understand how they're feeling and why. It's brilliant.

Kids need to be aware of their emotions: the root cause of them and how to cope with them.

Therein lies another problem: the coping practice of blame-shifting to self-regulate.

Having a parent die is traumatic for anyone, let alone a child. But having parents who've divorced can also be disruptive to children, especially if the parents don't know how to manage their own emotions. In divorce cases, which are declining due partly to millennials not getting married at a young age, children are taught to "not blame" themselves for these situations. Good advice. Not enough context.

The potential challenge is when kids use this blame-others, go-to defense mechanism to preserve their self-esteem and self-worth for every bad circumstance in their life. Not doing well in school? Must not be their fault. Can't focus because they're distracted or feeling rejected? Must not be their fault. Getting angry because expectations are not met? Definitely must be something or someone other than them. By doing this continually, they avoid recognizing or taking responsibility for their own shortcomings. Hence when misfortune strikes again (as it always does), their anger, confusion and frustration rises commensurately, and in the case of teenagers - off the charts, given their insatiable penchant to inflate their circumstances to epic proportions.

Another coping mechanism that parents rely on is assigning their kid's self-worth outside of who he or she is. In other words, they assign their kid's self-worth to some amazing athletic ability or off-the-chart IQ. There's so many problems with this approach. Firstly, their child can become increasingly arrogant and entitled because they feel superior to others and deserving special treatment. Secondly, there's a lot of pressure to stay on that very high pedestal their parents want them to be on. Thirdly, when he/she realizes they're not brilliant athletes or geniuses, they fall from that pedestal pretty hard.

Much of this can be assuaged if parents teach three things: 1) Life is full of painful experiences that are often not in our control (can't blame yourself); 2) Your response to that pain, and how you cope and handle it, is in our control (can blame yourself). Blaming oneself or taking ownership of one's actions is called accountability, a virtue that is rarely taught these days. It's often swept under the rug. 3) Your self-worth is invaluable - regardless of what you do and or how smart, beautiful or athletic you are.

Regardless of unfortunate circumstances in a child's life or having to endure parents' loving yet misguided doting techniques, there's also technology that's consuming them. I'm no luddite, but social media and a constant attachment to tech is harmful. Wait-until-8th is a group whose mission is to promote ownership of smartphones only after 8th grade. It's a good thing. If you don't agree because you want your 12-yr-old to be able to communicate with you - give them a cell phone (not smartphone) - or at the least, minimize the activity. Otherwise, they risk: 1) not sleeping enough 2) not spending enough down time for introspection 3) adopting an on-demand/impatient disposition 4) losing intimacy and in-person interaction 5) comparing themselves to others.

All these added up can affect their moods adversely, while they're still not mature enough to know how to control them.

In an article titled: The students who helped themselves when help was too slow coming, teenagers attributed their mental health concerns to "a constant requirement to do well in exams and the intense, addictive buzz of social media as pressures that older generations never had to deal with."

Another teen quoted, Hanah Pantling, 18, said: “The older generation say ‘suck it up’. We’re told to just get on with it."

Indeed, offering advice to 'suck it up' is a bit too harsh, though quite truthful, and there is social media pressure (that my generation didn't have). Add this to their struggle to cope with the pre-requisites of adulthood -- responsibility, failure, disruption, uncertainty and rejection -- it's no wonder we as a society have a serious problem on our hands with more than 20 percent of 13-18 yr olds experiencing a "severe mental disorder" at some point in their life.

Parents need to be more cognizant of this and put life's ills and suffering into perspective for their children. This awareness will dictate whether a child collapses in fear and surrender in the face of struggle or embraces the courage and strength to get through.

My friend Peter Thiel was asked in an interview with Dave Rubin what advice he'd give to people who want to feel "hopeful" about the future. He said the advice he'd give is pretty old. Peter quoted the Bible, referring to the 1st commandment: "Thou shall have no other gods before me" and the 10th: "Do not covet your neighbor's house."

In other words, don't make yourself God and don't compare yourself to others. In Peter's words: "We need to find some way to look up... We're looking too much at people around us... you need a different reference point."

These are great words to embrace. They help exercise our emotional intelligence. And we need to do more of that.