The secret to capitalizing on the $3 trillion healthcare market 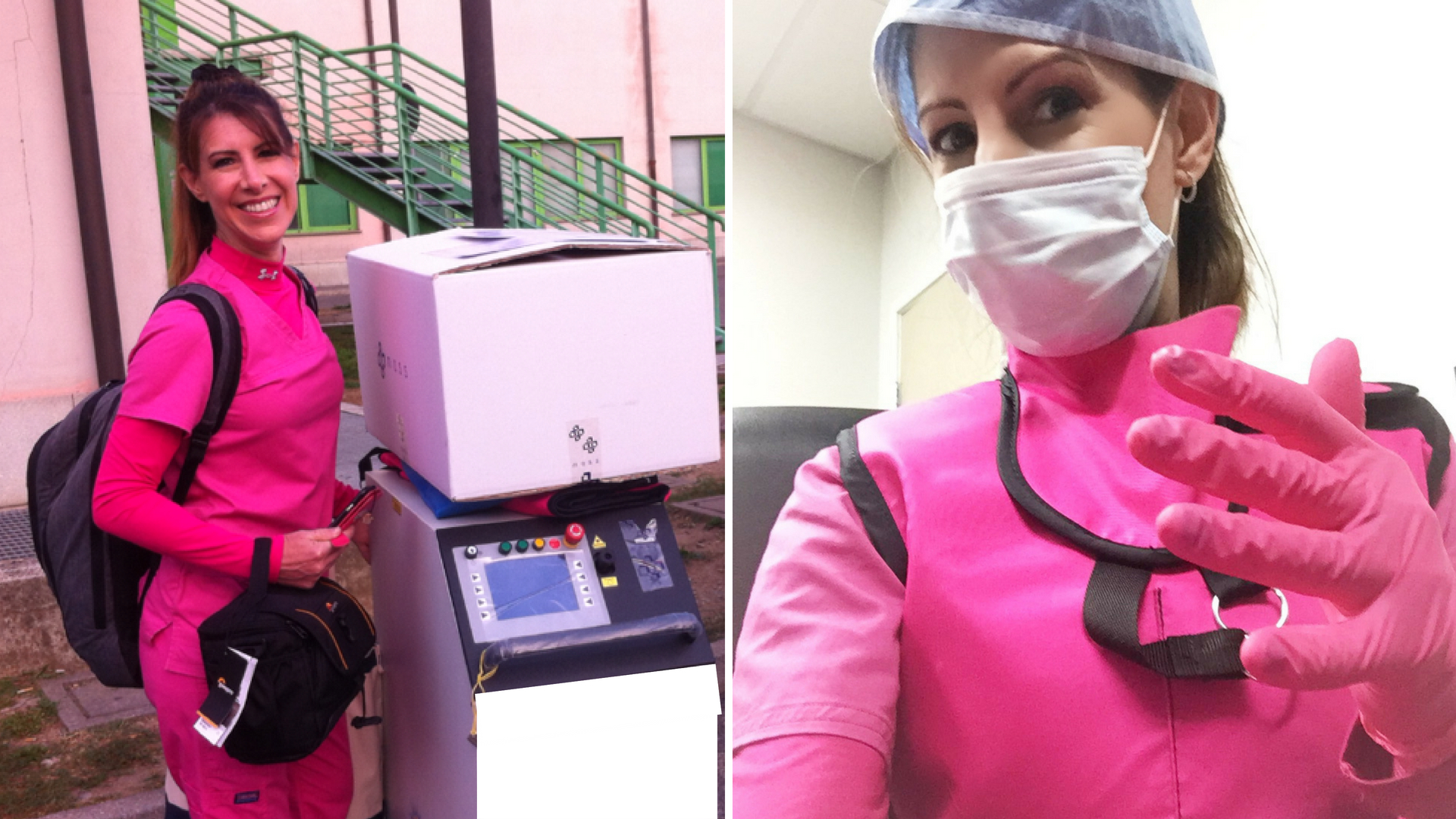 Three years ago I set out on an adventure, traveling the world visiting hospitals and Outpatient Interventional Suites (OIS’s) to better understand what innovation doctors are looking for that could lead to better patient outcomes and lower healthcare costs.

I’ve worn a lot of lead and now own three pairs of scrubs observing hundreds of endovascular procedures, where doctors use tools to reopen narrowed blood vessels. This journey took me across the United States, including middle-of-nowhere towns such as El Centro, California (next to the border) and Hattiesburg, Mississippi, as well as hospitals in the heart of big cities like New York. I also traveled across the globe to spend time in hospitals from the Netherlands and Belgium to Italy and Germany (where we joked that we were on the food tour), with stops in Parma, Bologna, Pisa, and Frankfurt. We even made a stop in London and Paris to observe how doctors adopt and adapt to new technologies.

I fell into this journey by accident.

It started with covering a medical device company, Ra Medical Systems, on my radio and video show for The Innovators.Network. Ra Medical Systems commercialized a groundbreaking minimally-invasive excimer laser to unblock arteries in a novel and safe way, based on the same foundational technology that revolutionized LASIK eye surgery. The company’s CEO, Dean Irwin, granted me unprecedented access to doctors, patients, and live patient cases, allowing me to become the first video journalist to cover an entire FDA study in this space, documenting the journey on video from start to finish.

I learned so much from my time with Ra Med that I wanted to pass it along to help healthtech entrepreneurs make more informed decisions and plans before jumping into the $3 Trillion healthcare market. Most important are the four criteria that a product—particularly a medical device—must meet. They must be better, safer, faster, and economical, in order to ensure that doctors will adopt it. It’s what led every doctor I spoke with around the world, uncompensated by the company, to call Ra Medical’s DABRA Laser System “a real game changer” when it comes to tackling blocked arteries, including those in the legs and in the heart.

Don't fall victim to the bells and whistles. Design a product that doctors don’t just want, but need. This requires putting in your 10,000 hours.

Inventor Dean Irwin spent years watching thousands of endovascular procedures to understand and order, based on importance, a doctor’s priorities. And he knew that while the excimer laser technology—which uses photochemical ablation to dissolve plaque—would appeal to doctors based on its fundamental potential alone, it wouldn’t be enough to create mass adoption. It had to touch the top four pain points expressed to him by all doctors, which was the need for a device that would provide better patient outcomes, be easy and fast to use, be safer than other devices, and save them money.

The nice-to-haves might get attention at the onset, but quickly become novelties that are tossed aside.

This research requires hours of observing procedures. But it’s worth every moment!

One extremely useful tool is the FDA’s website, in particular MAUDE - Manufacturer and User Facility Device Experience. The FDA requires any adverse events that occur during procedures be reported, and that information is made public. Figure out what’s getting doctors into trouble and what’s limiting a doctor’s success, and use that information to design a better product.

For Ra Medical Systems, by spending thousands of hours observing endovascular procedures and talking to doctors and staff, Irwin discovered that the most troublesome patients had CTO’s (Chronic Total Occlusions), or big pieces of plaque, not just narrowing, but blocking blood flow in their arteries. The issue for doctors was that those rock-solid blockages couldn’t be crossed with a guidewire. So a doctor’s only option was either an invasive bypass procedure or, if it was in the legs, an amputation.

Turns out, all of the endovascular devices cleared by the FDA up to 2017 require a guidewire in order to navigate the twists and turns of the human vasculature.

So, to pick-up where other devices fall short, the innovation opportunity was in creating a blockage clearing device that didn’t require the navigational assistance of a guidewire.

Of course, when you attempt to truly innovate your market, and when you become the outlier in your market, naysayers will come out in full force. But that didn’t stop Irwin. He developed a product that doesn’t require a guidewire to help it navigate the vasculature and tackle those troublesome CTO’s. So, when other devices fail, doctors now have DABRA.

Irwin’s design distinction for DABRA ended up being dual purpose: doctors could also navigate the vessel safely using DABRA, because of its unique tip and catheter design, which was flexible, smooth, and blunt.

A consistent theme across many adverse event reports was doctors having issues with guidewires, as even the most skilled hands can run into vessel perforations. Irwin’s innovative design allowed doctors another option to navigate the vessels.

He wouldn’t have discovered this important design distinction if it weren’t for the hours spent watching live procedures, as well as sorting through the FDA’s adverse event reports. For that reason, the FDA website should be the first place any entrepreneur visits before developing a product. It’s important to learn what gets doctors into trouble and how to help them avoid having a bad day.

Just about every medical device endures an adverse event at some point — the device doesn't have to be the cause of the complication, but may be used in a procedure where one occurs — but repeated adverse reports should cause concern. Some of the top devices in the endovascular market have dozens of pages of adverse events, including parts breaking off inside the patient, perforated vessels, and more.

Clearly, there was a need for something with greater efficacy, especially when more doctors are opening up their own Outpatient Interventional Suites that don’t have emergency room operations. A bad day for a doctor could mean a trip to the hospital with their patient in the back of an ambulance.

Entrepreneurs should use the FDA’s website to determine what business missteps companies are making, and learn from them. It's easy with a few clicks on the FDA's website, whether it's via MAUDE, it's medical device safety recall page, or company warning letters section, which indicates a company is under scrutiny by the FDA. You don’t want those same red flags waving at you.

Doctors say that a good device should require no more than three quick steps to operate. The simpler, the better. Doctors don’t have time for extensive training and manual reading. There’s less and less time every year. The average physician, according a report by Medscape, spends about 16 minutes with a patient for check-ups and can see up to 30 patients per day. In endovascular procedures to diagnose and treat blocked arteries, I’ve seen doctors book up to 24 patients per day. One big reason is that reimbursement models reward facilities for seeing more patients.

Further, there are often extraneous risk factors that need to be considered. For example, since endovascular surgery is done under a fluoroscopy or X-ray, doctors as well as patients are constantly subjected to radiation. This means getting the desired result in the least amount of time is critical. That’s why, when designing the DABRA Laser System, it was Irwin’s mission to have it work as quickly and simply as possible.

Even though the first three criteria are the most important, it's critical to remember that doctors are also cost conscious. While they will certainly pay more for a device that outperforms the competition, it’s a much harder sell when the price tag is higher than the current technology.

Take the time to browse through cost comparisons of any competition, and if your product is substantially more expensive, make sure that its benefits more than outweigh its price.

For those new to the healthcare industry, these four criteria — better, safer, faster, economical — are the key to ensuring competition won’t be quick to wipe out your company. Ultimately, the savviest entrepreneurs in healthcare are those that create products that provide better patient outcomes while saving doctors and the entire healthcare system money

Look at a product’s potential beyond its initial market. Companies are more successful if they take the path of least resistance (least regulation) to get to market. It’s why Ra Medical Systems started its journey with Pharos, an excimer laser that treats tough dermatological diseases such as psoriasis and vitiligo, sending them into remission. It’s the same fundamental technology as DABRA—an excimer laser—with a different delivery mechanism and software. But it required fewer regulation hurdles for topical treatments. Ra Medical was able to get to market after spending less time, money, and resources, while building critical infrastructure such as a quality assurance department, legal department, production and distribution procedures, in a way that could easily scale when its flagship product, DABRA, was ready for commercialization.

Stents had a different path of least regulation to market. You’ve all heard of stents, right? They were designed to keep arteries open. But the quickest way to FDA approval was to target a small market where patients had nothing to lose by trying a stent. In this case, that was patients with biliary duct cancer (essentially pancreatic cancer), which was pushing against ducts. The stent would provide some support in keeping the vessel open. But when the sales reps for these stents would go to doctors, their potential came across quite strongly, and doctors were seeing better patient outcomes in using them. Before the FDA knew it, millions of Americans had stents in their legs, their hearts, and more, and stent makers settled out of court for millions and millions of dollars, without admitting any wrongdoing.

One lesson here is that once a device is approved, if a doctor sees an alternate use for it, they have free reign to apply it within reason where they see fit if they feel it’ll help the patient.

So use your imagination. And ensure all you can envision is possible in application.

(Although I started out on this journey as a journalist, last year I accepted stock in Ra Medical Systems and reimbursement for expenses. My journey is documented at www.DabraLaser.com)