Interview with Arjun Moorthy, co-founder and CEO of CivikOwl

With fake news everywhere, there are now companies out there looking to fight the wave of false info

I'd say it's a pretty safe bet to say anyone reading this is familiar with this growing concept of "fake news." Maybe you've even fallen for some yourself, I know I have.

Everyone from Google to Facebook has suffered from an influx of fake information that is doing everything from putting people against each other to influencing the US elections. And it is getting smarter, it can be very difficult to decipher what is, and isn't real.

That's why we're starting to see companies like CivikOwl forming.

At its core, CivikOwl is working on making fake news a thing of the past by compiling trust scores based on a variety of variables and is available as a Chrome desktop extension and iOS app.

I had the chance to interview Arjun Moorthy of CivikOwl, check out the full interview below. 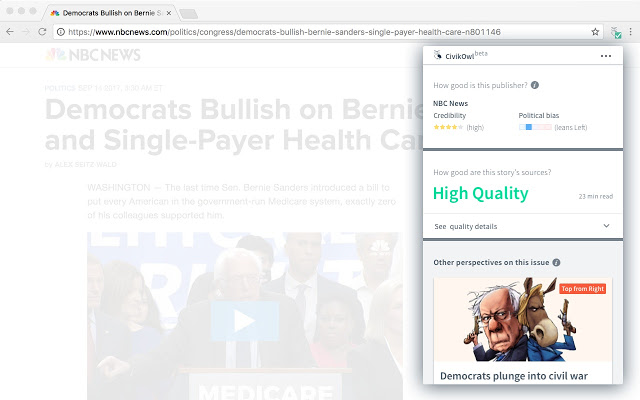 Care to introduce yourself and your role with CivikOwl?

I'm Arjun Moorthy, co-founder and CEO of CivikOwl. Like most startup CEOs I do a lot of things poorly and am always looking for people who are amazing at a function to fire me from that role. Thankfully, my co-founder and CTO, Ajoy, does exactly this on the technical side. So, for now, I drive product and strategy while managing all the administrative elements of running a company.

Prior to CivikOwl, I was VP of Business Development at HubSpot for six years, where we grew from 150 employees to 1500 employees post-IPO.

In just a few sentences, what is CivikOwl?

CivikOwl is a news evaluation service that rates the quality of a news article instantly and suggests the highest rated perspectives from thousands of sources.

The goal is to help people quickly identify quality news and be guided to the best news from across the political spectrum.

What inspired the creation of your service?

Both Ajoy and I love reading the news and found that many of our best conversations started after reading a well-written article. But we noticed that many times we'd get side-tracked by comments on how biased an article was, or how shoddy the research was behind it. So, like every other naive techie, we thought we could fix the problem by leveraging our product development chops to reimagine the engagement model of consumers with the news.

Our first idea to help people more than just read the news and take action by contacting their elected officials, or supporting a charity, about the issue discussed in the news. That idea failed and we thought it was because we didn't have critical mass for the app.

So we set about building a community where people discussed issues before taking action. But that too failed as we finally realized that most people just don't believe in their government anymore.

Fortunately, as we were flailing around we noticed a pattern of feedback from users where they basically said: "you want me to take action but I'm not even sure if I know enough about this issue to do so." So we decided to first help people find the best news on topics they cared about. And that's how we ended up where we are today. 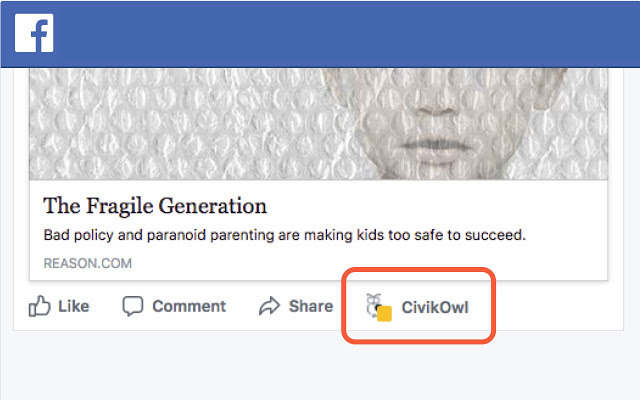 In what ways does your app and desktop extension decide what is legitimate and what isn't?

CivikOwl evaluates article quality based on several signals including the quality and extent of sources in the article, the expertise of the author on the topic, the writing style in the article, and the historical quality of the site. Each of these factors has numerous additional signals that have been determined by a machine learning algorithm. Indeed, the entire scoring engine is driven 100% by software but, unlike most machine learning algorithms, is quite transparent on how it works so that the public can understand why a news story is being recommended.

One key point is that CivikOwl seldom says an article is illegitimate. That is very hard to do technically and usually requires human fact checkers to verify individual claims made in an article. Rather, what CivikOwl does is identify articles that are well-researched, written by someone who is knowledgeable about the topic, and in a style that is easy for the consumer. From a technical standpoint, it's much easier for a machine to point out good articles than it is for a machine to definitely point out bad articles.

Regarding fake news, do you believe the problem is as big as some outlets make it out to be, or is it even a bigger problem than many realize?

From the consumer's viewpoint, fake news is a big issue, though in practice purely fabricated news is rare. Most people are pretty good at recognizing made up stories, which are often overtly political.

What's more common is biased reporting, as well as poorly researched news, which, to the average consumer, is all grouped under the term fake news. Hence the widespread consumer concern. Indeed, with most media companies being driven by ad-revenue they've gotten good at optimizing clicky-bait headlines to drive sharing on social media - further amplifying the public's concern with "fake news."

The bigger problem though is that most news organizations still live in the past and believe they are neutral arbiters of truth. They don't realize that they are inherently biased due to the background of their reporters and by the very stories they choose to report on. Rather than fight the bias label, news organizations should look to collaborate with others outlets to give the reader the well-rounded perspective they seek. Unfortunately, the news industry is built on competitive dynamics rather than cooperative ones so this is difficult to do without a change in business model.

What can be done about that?

For consumers, a starting point is to regularly read multiple, high-quality news outlets from across the political spectrum. But you really want to go to the next level - which is to identify journalists who report extensively on a topic and follow them. Not all journalists are equal and some work very hard at writing a well-researched piece with sufficient context - you want to find such journalists on every topic you like reading. But finding them is hard to do so CivikOwl makes it easier.

From the publisher's standpoint, they need to focus on select topics and become experts in reporting on it. It's increasingly impossible to be an expert in every topic in a world where there is so much information, from so many sources near a story. By specializing in topics outlets can give the context that's so vital in understanding our increasingly interconnected world. And in order to test if they've given the reader enough context and references, they can use a tool like CivikOwl to rate their writing and improve upon it before publishing. This will rebuild trust with readers and significantly minimize the concerns over fake news.

How does CivikOwl integrate with Twitter? Is it different on mobile?

Years ago I loved Twitter as people were thoughtful about sharing high-quality content. Now I feel as though much of my feed is mindless bickering and sharing of random stuff just to prove someone's pre-existing viewpoint.

CivikOwl attacks the above problem by overlaying its ratings on any tweets with news articles and making it easy to find the highest quality content in your newsfeed. It also suggests better stories on articles in your feed so that you can expand your horizons on topics you care about.

On the desktop, you see your entire news feed with CivikOwl ratings on any tweets that have news articles. On mobile, the main difference is that you can use a rating filter to quickly find the highest quality content and save the time of scanning your feed.

Anything exciting coming to the service?

Yes certainly! You'll soon be able to find the best news by topics, and across time periods like last day, week, year etc. And you'll also be able to follow the highest rated journalists by topic - to construct the highest quality news feed on topics you care about.

Did I miss anything? Anything you'd like to add?

As I mentioned, fixing the trust problem in news requires not just a content change but a business model change. A key observation is that most people read multiple news sites today. So they may be willing to pay for content but not just for any single site.

Hence, the business model for CivikOwl is a single subscription that allows you access to all news behind paywalls. This is an important contrast from advertising-based models and means our algorithms don't optimize for attention like other services do but rather for quality. This should fix another key driver of "fake news" insofar as lowering the emphasis on click-bait headlines and biased reporting. Say goodbye to filter bubbles!

I'd like to thank Arjun for taking the time to answer my questions regarding the new service and fake news, in general. More info is available on the CivikOwl website.