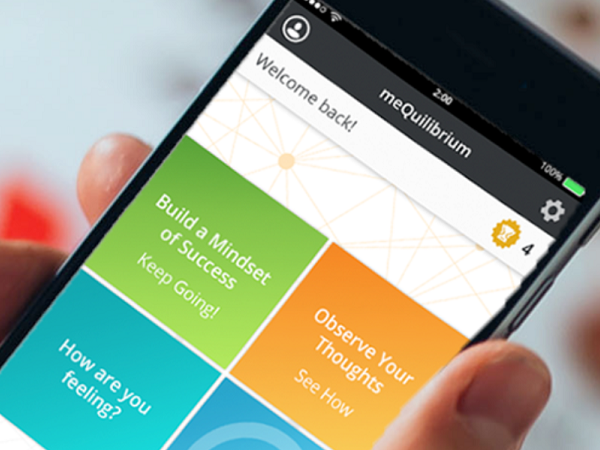 Work, as we know it, is changing very quickly thanks to advances in technology. In just the last five to 10 years, for example, the way that a doctor interacts with their patients looks nothing like what it did a few years ago  with all of the wearables, at home testing and EMR technology that has emerged. It's also likely nothing that it will be completely different in just a few years from now.

It's progress, but it's tough on workers. In that kind of environment, it's up to employees to keep up with the changes or else risk falling behind.

The idea behind meQuilibrium is to help workers cope. It's a platform that is designed to help workers identify their problem areas, and then work on them to reduce stress, build resilience, agility, emotion control, and wellbeing, to help them stay productive.

"Given the way we are working today, the way work has changed so much, and the fact that it's rapidly and disruptively changing, perhaps the most important thing for employers is to have people with the ability to be agile, adaptive and resilient," Jan Bruce, co-founder and CEO of meQuilibrium, told me in an interview.

If employees don't have those abilities, she said, there are "downstream effects of the failure to adapt," including high stress and burn out. It also leads to people who are not willing to understand how companies changing their business model, and how the nature of the way they work. To avoid that, workers need to change the way they think.

"The market has woken up to the fact that, at the end of day, it’s not about measuring engagement, and measuring performance, it’s about helping people be as engaged in their work as possible and that starts at the root with their thinking styles," she said.

On Tuesday, meQuilibrium announced that it raised $7 million in Series C funding led by HLM Venture Partners of Boston with participation from current investors Chrysalis Ventures and Safeguard Scientifics. This brings its total funding to roughly $25 million.

Founded in 2010, meQuilibrium uses behavioral psychology and neuroscience to aggregate cognitive, emotional and behavioral data. The company then uses its own predictive analytics platform to spot areas for each person where they need help; that might mean they need to learn better, or they might need to improve their emotional intelligence, or their resiliency or agility, or they simply need the skills to better manage their lives.

The company collects its data through its on-boarding process, in which it asks questions such as how employees they think and feel about work, about their life, how engaged they are at work, and how well they deal with pressure and change. The answers help the platform determine how an employee thinks and how they feel and then, with that information, it can determine how that influences their behavior.

"We’ve developed, over the last five years, analytics and algorithms that are basically predictive of performance, engagement, how agile you are in the midst of change, and even, to some extent, how your emotional and cognitive styles are impacting your life, like your satisfaction with your social life and your tolerance for change," Bruce explained.

One that data is collected it is then used to construct a personalized program for each person. So, for example, if there's an employee who gets angry when things go wrong and starts to smoke, meQuilibrium can help them with that.

"We can help them understand that they’re accustomed to reacting with emotions that maybe aren’t warranted, so we have interactive techniques on our app that people can use to rewire that subconscious habit. Or maybe you’re not very empathetic with your customers, so we help people become more empathetic. Or maybe you tend to think everything’s your fault all the time or you tend to think everything is someone else’s fault all the time. We can chunk it down and start giving people a program to help with that," said Bruce.

None of the data collected is ever shared with the employer, so employees are able to be honest about their thoughts and feelings about their work environment, though employers are given an analytics report that shows the overall satisfaction of a particular population of employees.

Ultimately, this data can have a major effect on a business and how smoothly it operates, saving it both time and money as workers become more efficient.

"What we see is that people who are highly resilient have four times higher job satisfaction, they are 60 percent less likely to suffer burnout, they are half as likely to miss a day of work per month, like an unplanned absence day. So, essentially, companies bring us in to address a host of problems, anything from high stress and high burnout impacting unplanned absence rates, disability rates, but also ineffective work, and productivity impairment in the workplace," Bruce told me.

"Our typical metric is a 10 to 15 percent improvement in resilience from baseline. That yields an $800 savings per participant, per year, in terms of output and reduced absenteeism and turnover."

In one case, a call center for a major cable company was able to reduce absence rates by out four days per year, per participant, and it saved them so much money they could run with one fewer call center.

Right now, meQuilibrium works with some of the biggest companies in the world, including with 10 percent of the Fortune 100 and almost 10 percent of the Fortune 500. Most of its companies are Fortune 200, meaning they are large, global businesses that have many different types of workers in many different locations. While Bruce couldn't tell me how many companies use the platform, she did say it reaches 1.5 million workers.

The new funding will mostly go toward hiring, growing the team from 50 to around 60 employees by the end of this year, while also going toward growing its performance platform.

“The company’s gross margins are strong; we’ve basically improved our gross margins about 40 percent in the last 18 months and they’re very strong at this point.”

In that same vein, the company also announced two new hires on Tuesday: Neal Bruce joined the company as SVP Product Strategy, while Kerry Smith also joined to serve as SVP Customer Success. Bruce, who was most recently as the Vice President of product at Globoforce, has over 25 years of experience in the HR industry, while Smith previously held several leadership positions at Skillsoft.

"Neal Bruce comes to us from a long background in HR tech, product work, I would say heavy on the analytics and data insights aspect. I don’t think there’s anyone as well versed in the challenges of employers, in terms of HR issues, and how technology can be brought to bear to solve these problems. He is pushing us into the future in terms of our product line," Bruce told me.

"Kerry Smith joins us from Skillsoft, where he led a world class team developing client success, high retention, customer expansion, call to actions. A large part of our value proposition to employers is helping them understand our data and understand how their people can be engaged to deliver on the transformative goal of innovation. You’re only as strong as your most agile and resilient people in this world and Kerry is going to systematize, put structure in our client success and customer development management business."

Bruce sees what meQuilibrium as a new field, one that is just emerging, and which her company will have a chance to dominate.

"People who can adapt and thrive and learn how to leverage the changing environments at work are going to be the people who have all the opportunities going forward. It’s so important that this happens that, if you are not feeling great about your prospects at work, the rest of your life is suffering. We see that a science-based program to help with employee engagement and performance, which is ultimately what we do, grounded in science and highly scalable and effective is becoming a must have for employers," she said.

“We’re doing a great job with the Fortune 200, and of course there’s more to do, but we want to scale into the mid-market. We want to continue to be the leader in an important new field. We think the future is analytics, it’s data and insights about how people think and feel and their behavior and how that impacts their success. This is a brand new field and we intend to dominate in it.”