Blockchain is still very new, and very confusing to a lot of people. Then compound that with how this field works within the realms of laws, both international and domestic, and you will find that it is even more daunting a task for businesses and individuals.

That's where people like Katya Fisher come into play - to make sense of it all from a legal perspective in order to make sure all bases are covered.

Katya Fisher, Esq. is a partner at Fisher Cataliotti P.C. a New York law firm focused on representing international businesses and entrepreneurs with a specific focus on media and technologies such as blockchain, cybersecurity, cryptocurrency and A.I.

A graduate of New York University and Benjamin N. Cardozo School of Law, Katya is a former Howard M. Squadron Fellow at the University of Oxford's Programme in Comparative Media Law and Policy and has been selected to Super Lawyers as a "Rising Star" in Corporate Law in 2014, 2015, 2016, 2017 and 2018.

Check out the full interview below. 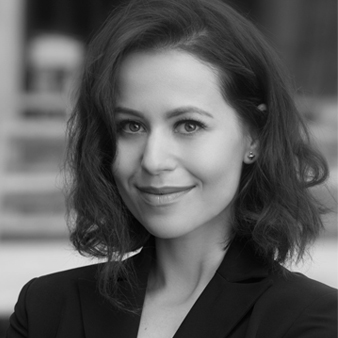 How did you get into blockchain?

My law practice has traditionally concentrated in two areas - corporate law and business immigration. I built a niche for myself representing foreign companies and entrepreneurs that wanted to conduct business in the United States. I have a unique background in that I am a bit of a generalist in a sense - I have strong knowledge of media/IP law, corporate law, business immigration and even international tax, so I have served in a general counsel role for a number of companies.

I have also been incredibly lucky to work with brilliant entrepreneurial clients throughout my career. Many of them went into the crypto/blockchain space and took me along for the ride and for that I am grateful.

You recently partnered with another attorney, yes? Coul you tell me who they are and why you chose to partner with them?

I did! I was a solo practitioner for a long time. I had great relationships with many attorneys, some as outside counsel and others as collaborators on various projects, but I was never motivated to partner with any of them. However, Michael Cataliotti and I have collaborated for the past two years and our professional relationship has always felt effortless. Michael is a very smart, experienced, and detail-oriented attorney who has worked with some top-tier companies like BMG North America, Lena Erziak, CB Insights, and TextIQ.

I have tremendous respect for his work ethic and abilities. For example, he lectures other attorneys at Lawline, publishes articles in the NYSBA Entertainment, Arts, and Sports Law Journal, will be serving as co-chair of the AILA Media & Advocacy Committee, and holds Q&A sessions at Columbia University, all while maintaining his practice, and both personal and professional relationships.

What are your favorite aspects of this industry?

The energy and the people. There is so much happening all at once. As a lawyer, it is thrilling--and somewhat stress inducing--to be part of a new industry that is not clearly regulated.

Every day is an adventure and I am constantly learning. I have also been truly fortunate to make many great friends in the industry, many of whom have been kind enough to serve as mentors and advisors in various ways and have extended a wealth of knowledge and guidance.

How are you engaged with the blockchain community?

Apart from serving as legal counsel to a number of companies and projects, I am involved in various initiatives: I serve on the board of directors for Alpha Point Technology, a publicly traded company involved in blockchain software applications for enterprise, and as an advisor to Wysh along with such luminaries as Jeff Pulver, Steven Nerayoff, and Noah Rafalko.

I recently emceed MState's "Blockchain for Enterprise Summit". It was a great experience. The event featured killer panelists and speakers, and we had a great turnout of enterprise companies in attendance.

What do you think about this wave of women in crypto and Satoshi is Female movement?

I love the idea of supporting women and inclusiveness overall. Coming from the legal industry I am very accustomed to being part of a "boy's club" and I think it is fantastic that so many women are enthusiastically entering this industry and helping one another professionally. That being said, I'd like to be known for my hard work and accomplishments and not my gender alone.

I am an Ambassador for Women’s Entrepreneurship Day Organization(WEDO) and the international digital campaign #ChooseWOMEN -   a movement that carries throughout the year in support of women in business globally. WED ignites women leaders, innovators, and entrepreneurs to initiate startups, drive economic expansion, and advance communities worldwide.

WED is celebrated in 144 countries and 65 universities and colleges internationally! The WED mission is to empower the 4 billion women worldwide to be catalysts of change, and uplift over 250 million girls living in poverty worldwide. Our agenda around the world focuses on the impact of technology, the global disruption, and the important pivotal role women play.

What are the legal issues that interest you the most in blockchain?

The security/utility token debate is always a hot topic, of course, and it does interest me quite a bit. The SEC has taken a cautious approach to determining its position on digital asset transactions over the last couple of years. There have been some statements, such as those made not too long ago by Director of the SEC’s Division of Corporate Finance William Hinman, that suggest that the SEC, while maintaining its stance that the investor protections provided by securities regulations continue to be honored, may be willing to recognize different classes of tokens. As of now, however, there is no clear formal guidance.

There are many other issues that I find to be of great interest as well. For example, the intersection between privacy and data protection laws in various jurisdictions as related to distributed ledger technologies and how that relationship will evolve over time.

Smart contracts are another area that gives rise to a number of challenges. Take, for instance, dispute resolution. If smart contracts are executed pseudonymously, there may be difficulty identifying the right party to sue. Disputes could give rise to confusion over applicable governing law or the need for an arbitrator with specific technical knowledge.

Some of the best entrepreneurs and technologists in the United States are foreign-born. Think about people like Joe Lubin, Sergey Brin, Andrew Grove, Elon Musk and Peter Thiel, to name a few. Michael and I both have extensive experience representing foreign entrepreneurs with their U.S. immigrant and non-immigrant employment-based petitions. Various employment-based paths currently exist such as the O-1, L-1, E-2, and EB categories but we would like to see more comprehensive reform in this area and better pathways for immigrant entrepreneurs to help facilitate innovation in blockchain and other technologies.

Katya will be speaking at the Crypto Finance Conference at Half Moon Bay in September.