Future of mental and behavioral health: biological underpinnings; how to boost serotonin levels

In three weeks -June 21 - HP and Vator are hosting our next SplashX Invent Health salon. As readers know, this time we're focused on mental and behavioral health.

We're passionate about this topic because one out of five Americans will suffer from a mental disorder, according to the National Alliance on Mental Health (NAMI).

These numbers are on the rise. The World Health Organization says that depression spiked 18 percent worldwide in 2017. Non-profit group Mental Health America shows that 7 percent of Americans will suffer a Major Depressive episode.

Given the comorbidity of depression and physical disorders, mental illness is the most common disabling disease in the world. The Centers for Disease Control and Prevention (CDC) estimates that by 2020, depression will be the second most common cause of disability, behind heart disease.

This rise hasn't gone unnoticed in Silicon Valley. Investments in mental and wellness startups has been on the rise since 2013, according to CB Insights. Nearly $150 million was invested in these startups in Q1 2018, according to the research firm, that's nearly as much as the $165 million raised in all of 2015. At this rate, it can also be significantly more than the $316 million invested in 83 deals in 2017, up 39 percent in dollar volume from $226 million raised in 2016. 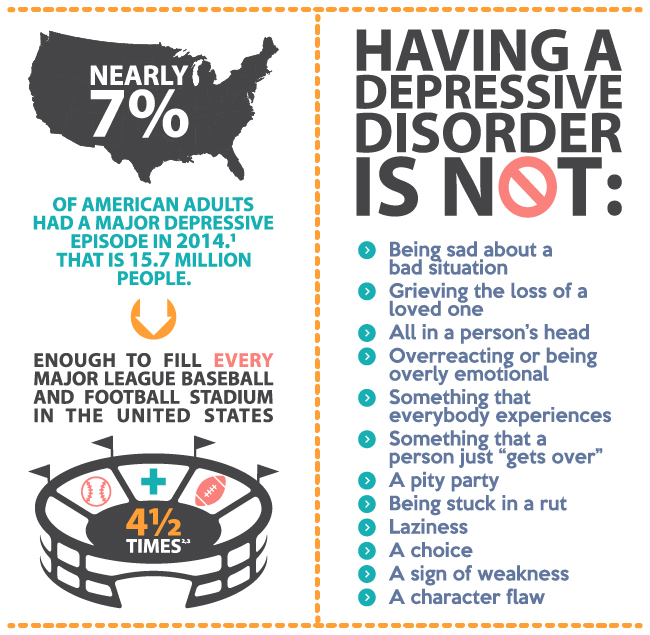 So that's why we want to focus on this problem. Importantly, we want to make sure we're understanding the root to this growing epidemic. Unfortunately, I fear this is something we're not doing well.

The etiology of mental disorders isn't just brain composition, but rather a host of factors including culture and upbringing.

"A mental health condition isn’t the result of one event. Research suggests multiple, linking causes. Genetics, environment and lifestyle influence whether someone develops a mental health condition. A stressful job or home life makes some people more susceptible, as do traumatic life events like being the victim of a crime. Biochemical processes and circuits and basic brain structure may play a role, too," according to the NAMI.

To this end, the rise of mental disorders can't just be that more people have dysfunctional brain compositions. Rather the rise correlates with environment and cultural factors.

Yet what we seem to be doing is pathologizing these disorders and attributing them to our biological makeup. To wit. According to the DSM (Diagnostic and Statistical Manual of Mental Disorder), there are 410 disorders (published in 2000) - quadruple from 100 (when first published circa 1950’s). This broadening of the term in and of itself would expand the number of people in this mental illness bucket.

Are we all abnormal? I'd say no. What I would say is that we've lost our way as a society and community in understanding pain and suffering. And we need to start addressing that.

As John Boyd, CEO of Sutter Mental Health, said to me: "As a society, we have to rethink the whole idea of mental health care... we’re not leveraging community." What he means is that mental health has as much to do with how we interact as a community and how we support one another.

Interested in learning more about this topic! Meet me and my partners and other guests at our June 21 at our SplashX Invent Health event. JOIN US!

And once again, here's some relevant posts I found could be useful in framing the discussion, along with my comments.

What are the biological underpinnings of depression?

A recent study identifies 44 genomic variants, or loci, that are associated with depression. The analysis, published this April 2018 in Nature Geneticsi, a scientific journal published by Nature Research, included more than 135,000 people with major depression disorders (MDD) across 344,000 controls. Of the 44, 30 are new discoveries.

The study found relationships for major depression with high education, while lower education and high body mass were "putatively causal." The study was written up by Futurity, which interviewed one of the researchers, who pointed out that "we all carry genetic variants for depression," and that "many life experiences also contribute to risk of depression."

My takeaway is that certain people with these certain genes will be predisposed to depression more than others. BUT life and external cultural factors will be a big factor in how that manifests in a person. The next article below speaks to this point.

This is an insightful piece showing how culture can override genetics.

In 2009, psychologist Joan Chiao found data suggesting that an unusually high number of East Asians carried the "depression gene" - the shorter allele or variant of the mood-regulating gene known as SERT (serotonin transporter). A shorter SERT correlates with people who are more likely to become depressed. Chiao and one of her grad students Katherine Blizinsky found that while East Asians carried the short-SERT variants at nearly twice the rate (70-80%) than white westerners (40-45%), they "suffered less than half the rates of anxiety and depression." 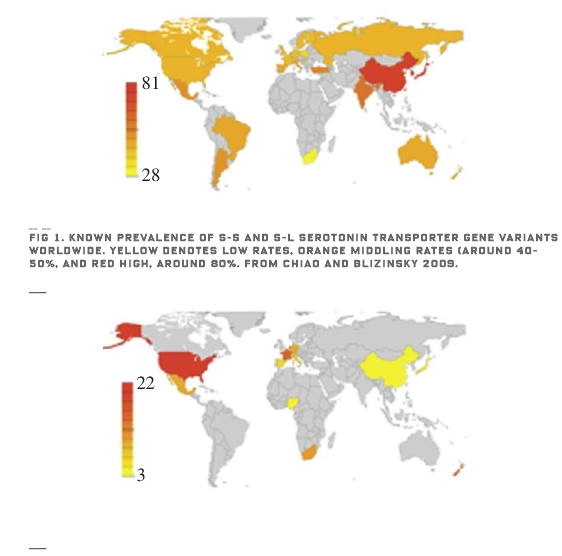 Why did East Asians, who carried the depression gene, not get depressed? The author says it was differences in culture - one that was resilient and one vulnerable. It could be that depression was overdiagnosed in westerners. But Chiao considered gene-culture evolutionary theory, which is the notion that genes and culture affect each other and that culture can shape the way genes evolve. So Chiao looked at cultural differences that might affect the depression gene in both westerners and East Asians.

What they determined was the individualistic western culture and the collectivism Asian culture had a lot of influence. The short SERT gene, the team asserts, sensitized people not just to bad experiences but good ones as well. And by experiencing more positive events, these same people had lower levels of depressive symptomatology. Interestingly enough, short-SERT people are also more sensitive to social influence. So if it's positive social support, this can buffer against depression.

On the flip side -- and this wasn't cover in the article -- what's interesting to me is whether short-SERT people who are sensitive to social influence may therefore be predisposed to depression if they constantly receive negative social influence. For instance, if someone isn't as smart as others, isn't as socially acceptable or sophisticated, or isn't as athletic -- basically someone who feels inferior to others - the social influence that may buffer against depression may actually magnify it.

"Culture leaves an undeniable imprint on our emotional narratives, including the way we feel and think of distress, how it manifests and how we cope with it," Marianna Pogosyan, an intercultural consultant specializing in psychology of cross-cultural transitions, poetically wrote.

The theme around depression appears to revolve around loss, she writes, based on her studies of different cultures. Importantly, it's how we process loss that affects how it's manifested in our lives.

"Many of the risk factors for depression are similar across cultures. These include gender, unemployment, traumatic events. The themes of depression tend to revolve around loss," she said. "But what people make of their losses and how they interpret their distress differs tremendously across cultures. In the West, we have increasingly pathologized depression and attributed it to biomedical factors. We tend to think that distancing people from their distress can be a functional way of helping them. However, teaching people that this very complex social, cultural, and biological phenomenon is entirely biological can backfire. It encourages people to ignore environmental factors, and instead, essentialize depression as a characteristic of themselves and their biology."

This post underscores why pharmaceutical companies just don't get to the root cause of the mental illness problem. And that is a problem in and of itself.

As an example of why the pharmaceutical industry has to start thinking differently is that when they receive genetic information, they believe there is a drug for that.

In a study conducted in Ireland where 10 percent of residents are considered depressed, a new link between depression and certain genes were discovered. “The whole aim of generating the data is understanding the genetic predisposition for depression," said Ashley Winslow, a geneticist with the University of Pennsylvania and pharmaceutical giant Pfizer, in an interview with the Irish Times. “[If] we can understand the biology of the dysfunction that takes place, then we can develop therapeutics for treating the disease."

The study, which was published in 2016, showed 15 regions in the genome that were altered in people who reported having depression. Some of these genes had already been associated with other disorders, such as schizophrenia, but never depression.

How do you build up more serotonin in your body?

If the biological basis of depression is depletion of serotonin, norepinephrine and or dopamine in the nervous system, how do you raise the levels of these neurotransmitters?

Serotin is what they call the "happy hormone." And it has influence over mood, emotions, memory, pain, sleep, digestion and appetite. High levels of the stress hormone cortisol reduces our serotonin level.

Take B6 and B12, which are associated with lower risk of depressive symptoms. Get out and walk or do some activity in the sun. Less sunlight drops your serotonin levels.