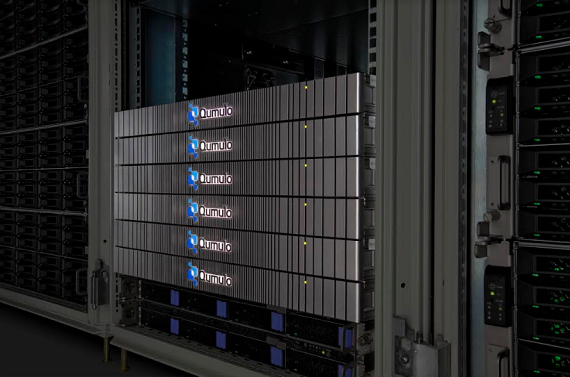 There's a ton of data being created in everything we do now. From the car we drive, which has an anti-lock brake system or adaptive cruise control system, to the x-rays we get at the doctor, all of that creates data that needs to be stored somewhere. There's so much data, in fact, that companies need more room than ever to store it.

Enter Qumulo, which allows companies to store their data using software and the cloud, rather than expensive hardware, making storage cheaper and more flexible.

"We were founded six and half years ago with a very focused mission and that was to help customers store, manage and understand massive quantities of what we call, 'file-based data'," Bill Richter, CEO of Qumulo, told me in an interview.

On Wednesday, the company announced that it closed $93 million in Series D funding.

The round, which was oversubscribed, was led by funds managed by BlackRock Private Equity Partners. Goldman Sachs and Western Digital also participated in the round, along with all of Qumulo's major existing investors, including Highland Capital Partners, Kleiner Perkins Caufield &amp; Byers (KPCB), the Madrona Venture Group, and Valhalla Partners.

With this latest funding, the company has now raised over $230 million.

Qumulo's software is called QF2, which stands for the Qumulo File Fabric. Customers buy QF2 and deploy it on industry standard hardware, rather than the expensive hardware offered by other companies in the space.

"That really drives down cost for customers and when you drive down cost you increase your ability to scale," said Richter.

"The other thing that we’ve done is in our software platform customers get a really profound data analytics platform, and what that allows them to do, and this separates us from the legacy competitors, is not only manage storage, but to really manage and understand their data. That’s a significant difference; they’re no longer just working on the vessel, they’re getting to what’s inside of the vessel."

Qumulo’s customers include three of the five largest companies on earth, nine of the 10 top Hollywood studios and many of the most admired Fortune 500 companies. For example, DreamWorks will use Qumulo to build its next animated film as they generate billions of files. Hyundai Mobis is also a customer and will use Qumulo products for its autonomous connected driving technology.

The value that Qumulo brings to its customers comes in "three distinct ways," said Richter. "The first way is that they just save money, and depending on the environment our customers save significant amounts of money just on the platform itself. The reason for that is we sell them software and standard hardware rather than expensive proprietary hardware."

Second is that Qumulo is able to increase the performance of their customer;s application.

"Things just happen faster and the way that that manifests itself if you’re a media and entertainment company is you can get your movie produced faster, you can get into theaters sooner. If you’re a researcher at a university you can get your published faster. If you’re an oil and gas company, you can determine where you should drill faster. Performance itself has a very meaningful impact on our customers," he said.

The third value comes from understanding intelligence with its analytics layer.

"When customers understand their data they can make better decisions about it. If they’re flying blind, if they’re experiencing a term we use called, ‘data blindness,’ they’re just not going to make as well-informed decisions as they could otherwise," Richter noted.

These three value propositions are Qumulo's "opportunity to go take share from some of these stodgy, incumbent, legacy vendors."

Taking on the legacy vendors

The competition for Qumulo comes in the form of companies like Dell, EMC and Quantam, which are "from a different era," said Richter.

"They grew up in an era that was defined by propitiatory hardware. So you'd have some sophisticated piece of hardware and then you’d go sell it at high end prices to customers and that was okay for its time, but, as data has exploded, customers can no longer sustain that type of model," he said.

"What they’re saying to companies like us is, ‘We need a better way, this needs to be solved at a different scale with a different model. Our approach has been to use software and the public cloud to solve this same problem."

Because Qumulo is a software company it can deploy on premise in customer’s data centers or their private cloud, but it can also run in places like AWS and that gives customer the ultimate flexibility to decide where they want their applications to run.

"Sometimes they don’t know, they start on premise and they move to public cloud or they go in the reverse direction. That represents a significant difference from the competition. The competition’s goal is to keep customers in jail, on premise, buying expensive hardware and they’re buying something that lacks innovation," Richter said.

"Really, Qumulo is the future, and some of these legacy companies are the past and it’s really as simple as that."

The future of Qumulo

The company will use the new funding to build out its team, which currently consists of 180 employees. Richter expects to double that over the next couple of years.

"We are hiring really aggressively. A lot of those employees are in our innovation function, whether it’s R&D or product groups, but we’re also hiring folks in our go-to-market, sales and marketing function, people in sales and marketing, and our channel organization," he told me.

In addition, the money will also go toward geographic expansion. A year ago the company was only in North America, and just in the major cities, but it now becoming denser in North America and earlier this year it opened up Europe. Qumulo now has teams in countries that include Germany, the United Kingdom and France.

"The markets are similar there; in Europe there’s a strong automotive sector, there’s a strong media and entertainment sector, healthcare and research are very strong in Europe. I keep talking about the vertical markets, but horizontal IT produces a lot of file-based content," said Richter.

The plan is to go deeper into Europe and then, eventually, begin operating in Asia as well.

As Qumulo expands, Richter says he expects some things in file storage to change radically, while other aspects stay the same, both of which will benefit the company has it continues to grow.

"Data is going to continue to explode at a rate that is staggering and unstoppable. You see this in every aspect of your personal life. The TV you bought from Costco is now a 4K TV, and if you bought one 10 years ago it was barely and HD TV. That probably represents two orders of magnitude greater in quality and greater demands on data. The same thing when you go to the doctor, the same things on the apps you use on your iPhone and the number of pictures and videos you take and post to social media and on and on. The thing that’s consistent, that’s underpinning our business, is the continued explosion of data," said Richter.

"The thing that’s going to change a lot is customers want to be set free from their data center and they want to decide where their data and their applications live. Some things make tons of sense to run in the data center and that’s because it’s important to have the data near a human. Other things applications it’s perfectly acceptable to have that data live in the public cloud. Still others, customers don’t know where the data should belong, they don’t know the moment they produce it and have to go through a lifecycle and find the right place and the right location for it to be optimized. So what we see our there in the future is an environment where data moves from the edge to the public cloud and likely multiple clouds."

Qumulo's software enables the kind of movement and interoperability that customers desire and the company's ultimate goal is to be known as the brand that customers can trust to continue to bring them innovative solutions, and a brand that they can trust with their data.

"Building a brand around Qumulo that people can trust with their data is really important for us, and that’s not just for security, but for mobility and its access and its capability. I can see ourselves being that brand in five years. I’d be really proud if we got there."