Do’s and Don’ts - Presentation by Bambi Francisco on Entrepreneurship
This is from a talk I gave at FR8Star, a marketplace for shippers and carriers.
I just had lunch with Matt Kropp, Founder and CEO of FR8Star, at his Oakland offices. Prior to lunch, I gave a talk to his staff as part of FR8Star's Wednesday lunch speaker series. I was the first outside speaker, but perhaps they'll have more. It's a good tradition. Since I'm not an expert on the trucking industry, I thought I'd talk about something I have significant experience in: being an entrepreneur, and a human (I've got decades under my belt for this one).
While I didn't have a set speech, here's highlights and talking points about each do and don't listed on the slides. As a mom of four boys, and as someone who's conducted about 1,000 interviews with entrepreneurs from Larry Page, when Google had 10 employees, to Mark Zuckerberg, when Facebook was still confined to colleges, to Brian Chesky, when Airbnb had six employees, including the three founders living and working in their apartment, I decided to glean through those interviews as well as my own experience to come up with these lessons. A lot of these lessons I share with my boys.
1) "Do one thing every day that scares you" (Eleanor Roosevelt):
I'm pretty much an introvert, so public speaking isn't something that comes natural to me and makes me a little nervous. That meant speaking at the lunch. In all seriousness, having grown up in a house where English was the second language and when spoken was pretty choppy at best, my goal was to always practice speaking and communicating better. It scared me to speak in crowds. But I kept doing so to feel more comfortable. Fast forward, a more current example is when my son Race Roizen joined the ski team. He had to learn how to take the chairlift by himself with no bars. He was five years old. But I had to face that fear and realize I can't always keep him safe. It scared me every day, but I became more comfortable and it became less of a fear. 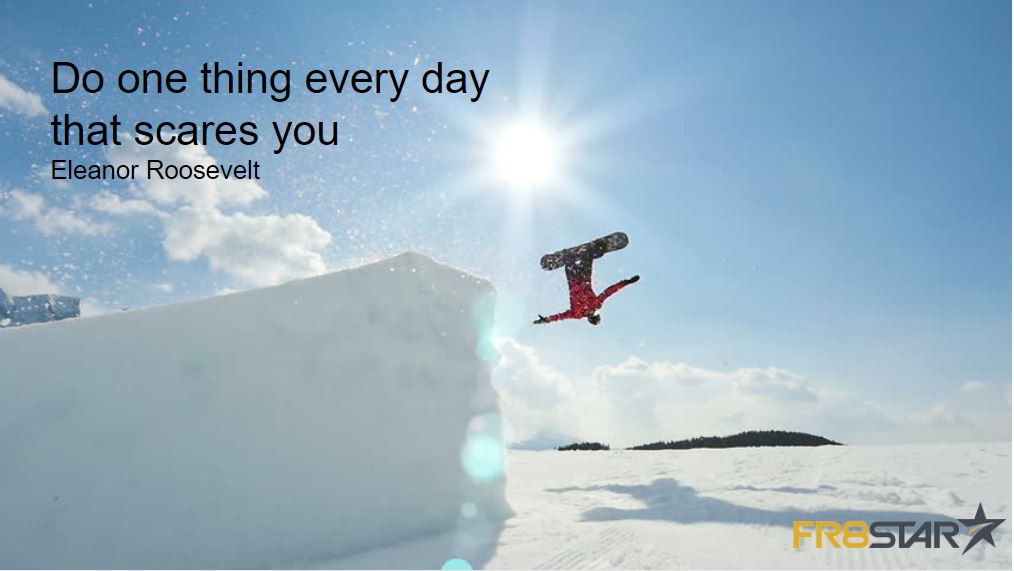 2) Do start every day with an accomplishment
"If you want to change the world, start off by making your bed" (Admiral William McRaven of the Navy Seals)
The Navy Seal's words are on our chalkboard at home so my kids learn to do something every day, which typically starts with making their bed. We have a large household of eight people (four sons, my husband and my parents, who live with us). So it has to operate like a machine, with every part moving in concert to contribute to the family. So each person has to accomplish something. It's good for the family and it's good for each person individually. As McRaven said, even if you don't accomplish anything that day, when you get home to a made-up bed, it feels you had one victory. 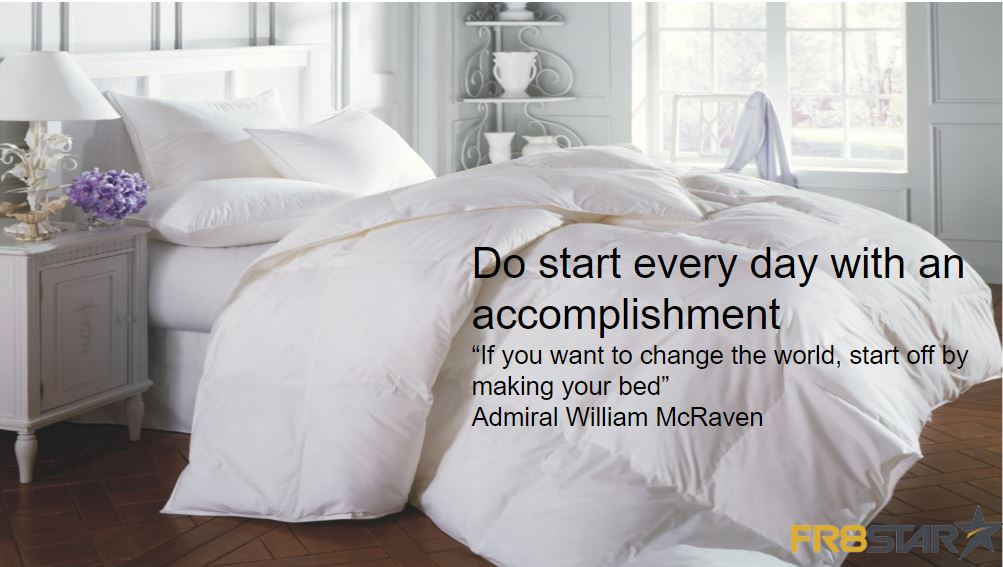 3) Do sell what they need; Mark Cuban
I asked Mark why he sold garbage bags when he was 12 yrs old and he said because it was something he knew everyone needed and would need to replenish. It was a repeatable sale. Sometimes as entrepreneurs we get so caught up in finding some ingenious solution that we end up selling what people don't need. 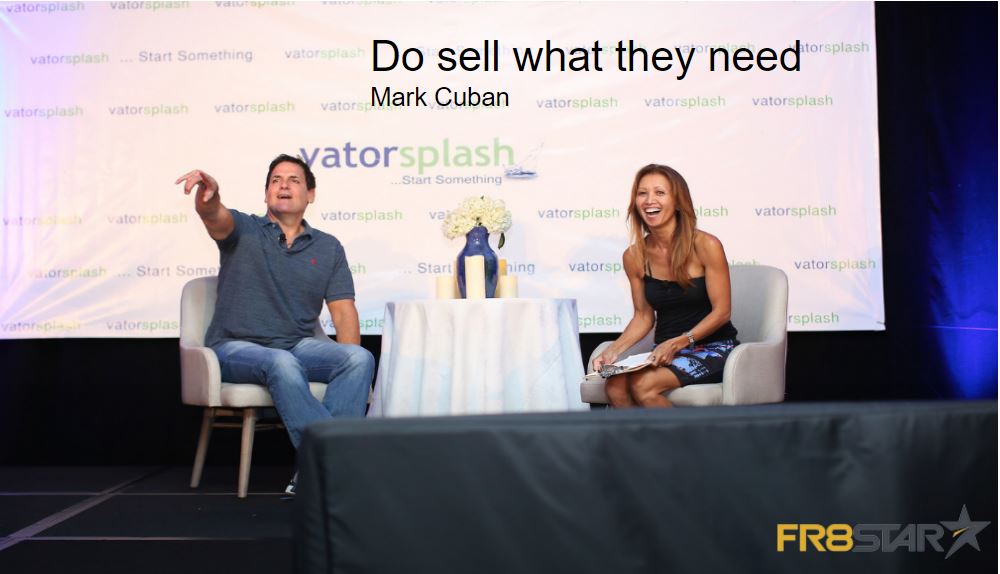 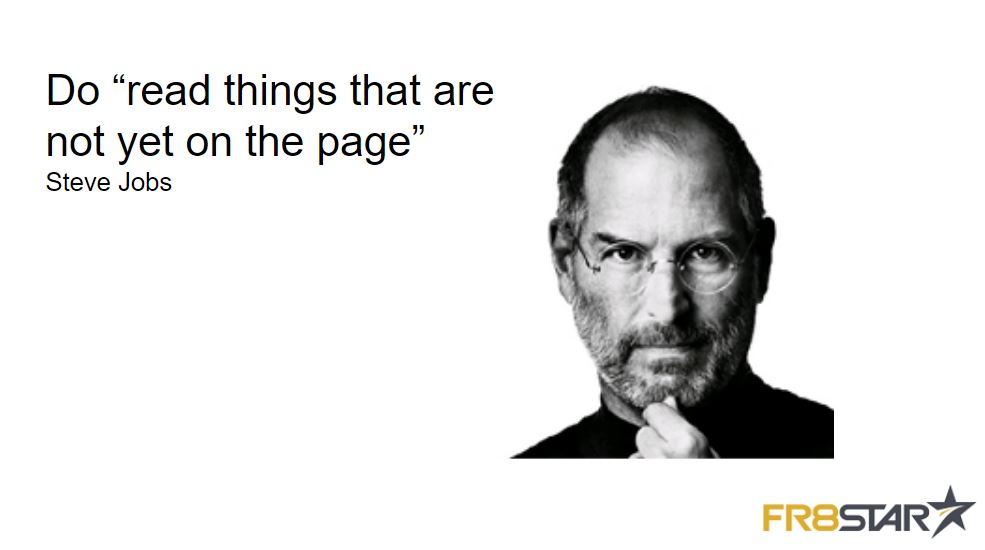 5) Do always ask why
Will Roizen (10 yrs old): Why do you always ask why?
Race Roizen (5 yrs old): Why do you never?
So how do you read what's not on the page? Always ask why. This conversation between my sons Will and Race happened last year. My younger son is extremely curious. His go-to bedtime book is Little Kids First Book of Why. His curiosity will serve him well when he grows up. It's one of the top characteristics an entrepreneur should have. 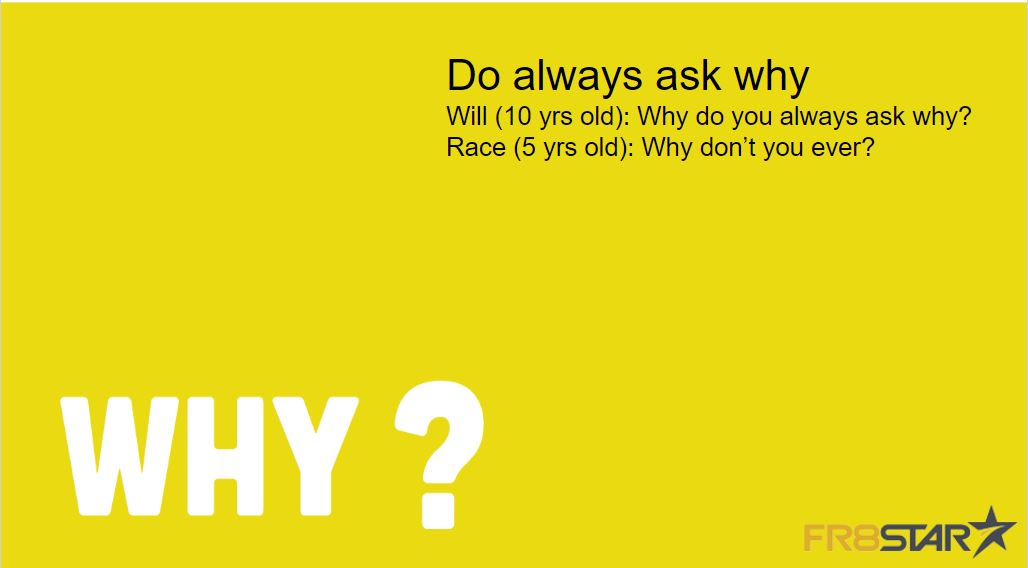 6) Don't be lazy
"Anything that has been done can be done better" (Vivek Ranadive, Owner Sacramento Kings)

If you just accept things the way they are, you're being lazy. Lazy people aren't contributors. Challenge the status quo, but do so with a solution. 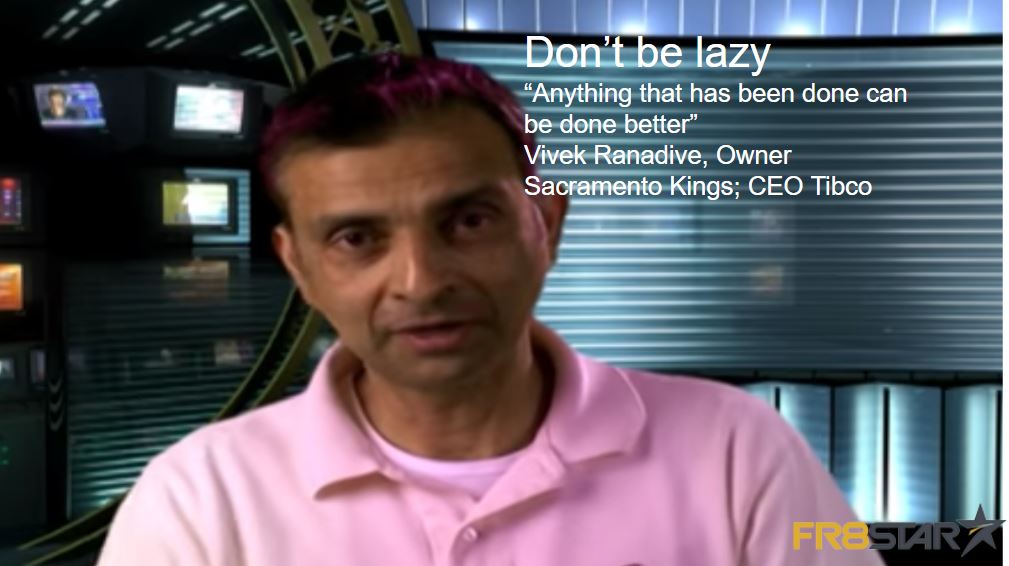 7) Do iterate... to find your value-add
On your journey toward greatness as you create a new solution and service, you'll find that iteration is part of the process. Alfred Lin, Partner at Sequoia Capital, told me that Zappos, where he was the first CFO, iterated multiple times to find their value-add. As a retailer, they could have focused on having the largest footprint/locations, or the broadest selection, or the lowest price. But they finally realized that their value-add and differentiation was in the way they could serve their customers. Their product was service. 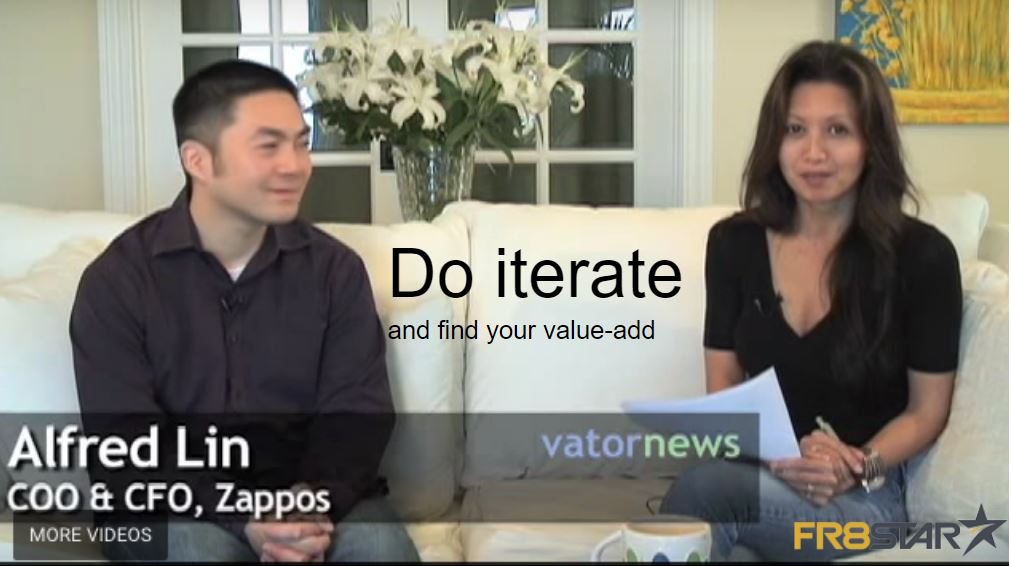 8) Do be determined and resilient
I've conducted more than 1,000 interviews solely on lessons. We've captured about 600-700 of them on VatorNews. You can find them here under our "Lessons Learned" section. I have been extremely blessed to have met so many brilliant people whose contribution shaped the way we live, work, interact and socialize. The No. 1 lesson across all these interviews (I'd say 40 percent of the people interviewed) is that an entrepreneur has to be "determined" and resilient. They can't give up. The reason they can't or shouldn't is because as Alfred pointed out, they will most likely have to iterate on their idea. For Scott Banister, he said that PayPal had 40 employees before the full transition from Palm Pilot payments onto eBay payments. He said at IronPort, there were 20 people before the company switched business models and started selling into marketing departments vs IT departments. Time and again, Banister said, "We went back to the drawing board." 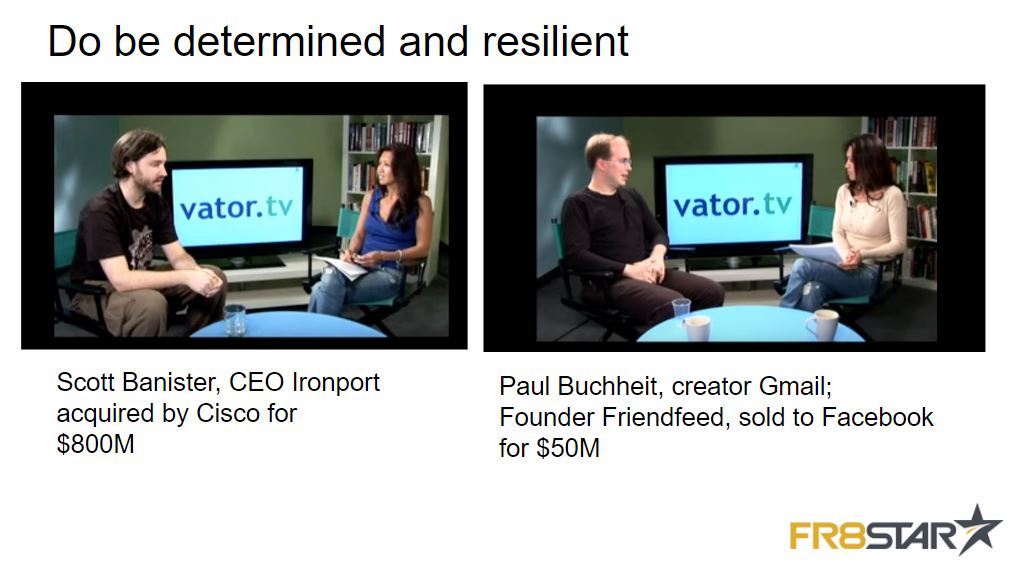 9) Just DO it
Sometimes it's just your "Time to make the donuts" moment
In the 80s (yes I'm dating myself), there was a series of commercials about the donut guy for Dunkin Donuts. He had to get up every day, without fail, rain or shine, and make the donuts. It reflects the monotonous and tedious drumbeat of life. We all experience it, whether it's making dinner, taking public transportation to work, working out at the gym at 6 am in the morning, writing yet another story or report, or knocking on yet another door to sell your product. Yet it's in these times when we get things done. It's not the time to think bigger picture, it's just the time to DO it. 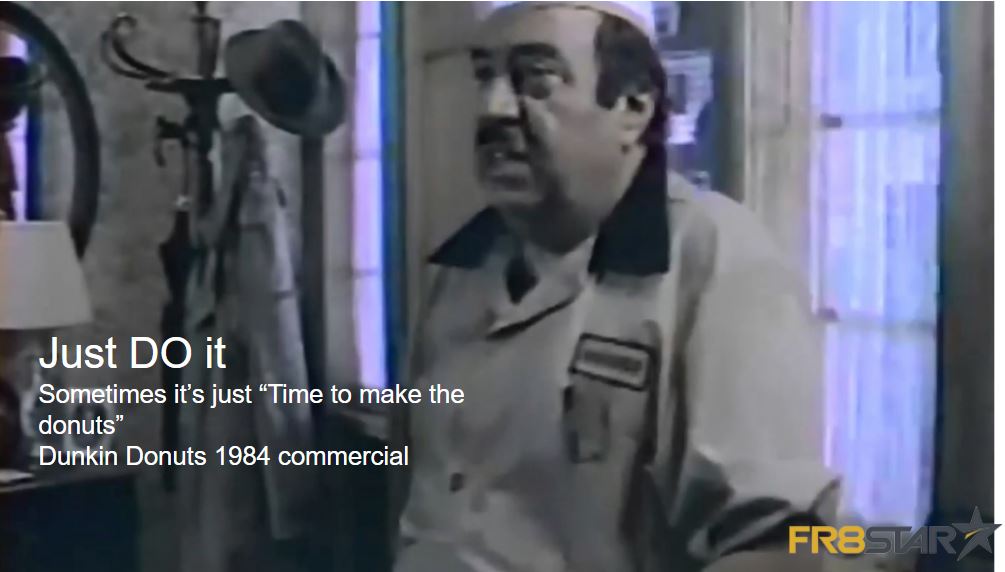 10) Don't take shortcuts
If you're in that "Time to make the donuts" moment, you'll be tempted to take shortcuts. Sometimes I think about having an angel on my shoulder watching me and saying, "Do it again." So in these moments when no one may be looking and you just want to check the box that you did whatever it is that you needed to get done, just remember to do it well. Don't shortchange others (if it's a job you're doing for someone). Take pride in your work or whatever it is you're doing. Besides, the only one you're shortchanging is really yourself. 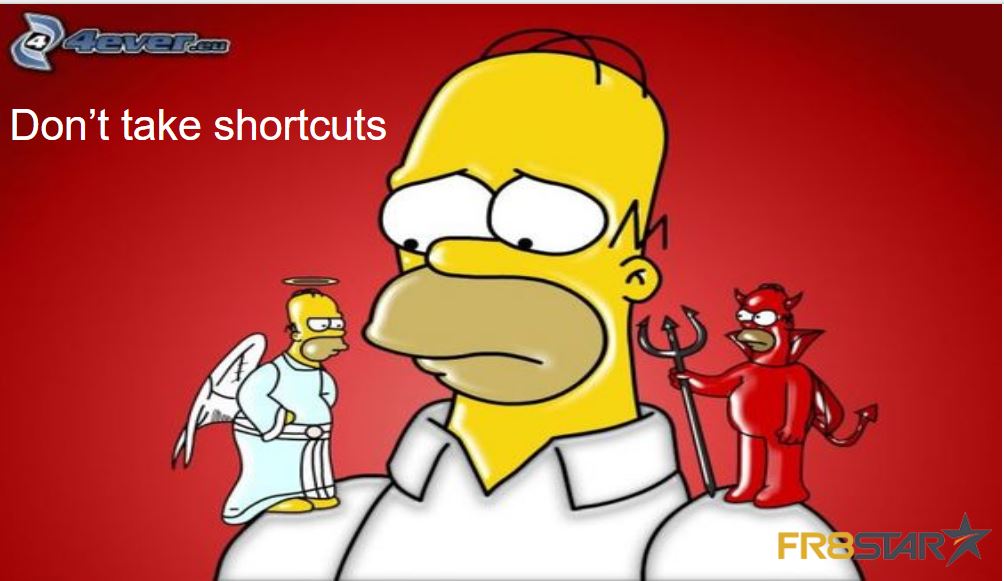