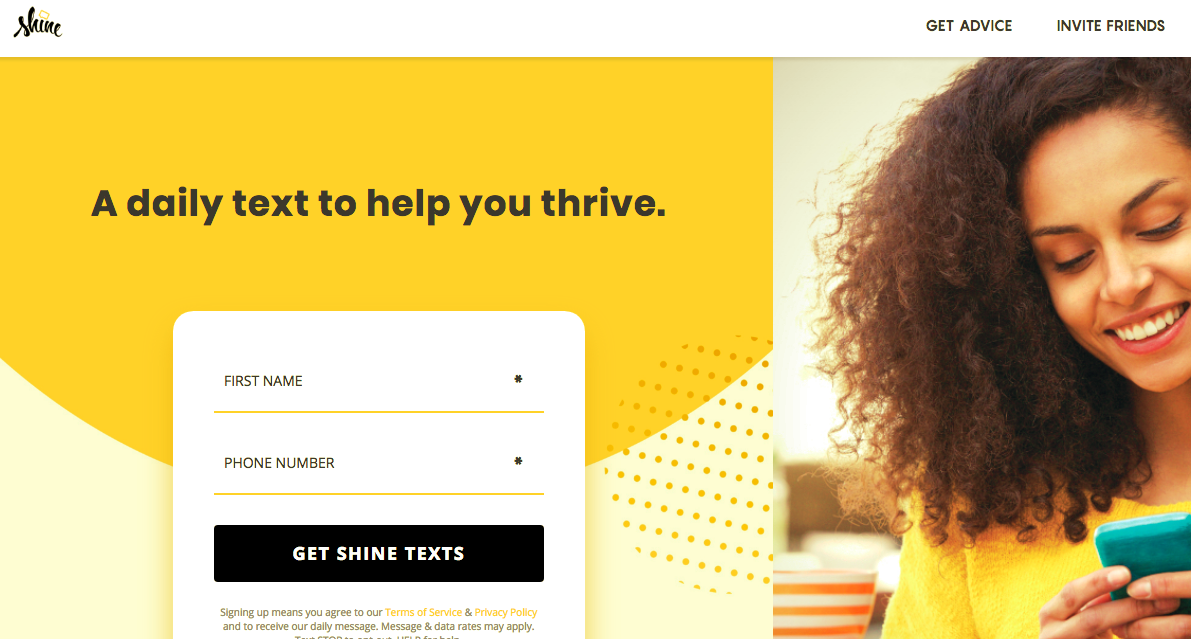 Millennials. The generation empowered to stand up against the status quo, authority and convention. This selfie generation is also the one to seek affirmation online, purpose and a sense of self. They have a lot of freedom. Yet at the same time, and ironically, they may be the most isolated, anxious and fearful. It's no wonder we're seeing an increase of new technologies and services aimed at helping this group cope with life's vagaries.

[Editor's note: Join HP and Vator for our latest SplashX Invent Health salon series on June 21 at HP headquarters. The topic will be Behavioral and Mental Health. We'll take a deep dive with tech pioneers, VCs, insurers, providers about how technology is updating the current ways to solve for mental disorder, anxiety, depression, etc.)

One such company is Shine, a self-care app and texting service that sends daily tips, and content to help build happiness, mental wellness and productivity initially to the generation born between 1981 and 1996. After hitting a two-million-member milestone two years after launch, the startup raised $5 million, led by Comcast Ventures.

The Shine app is designed to help people become more intentional about their activities so they can be more balanced, said the two co-founders Marah Lidey and Naomi Hirabayashi. Other self-help services are either too expensive or out-of-date.

If their service is designed for millennials and is out of date, would it have been effective in the 80's, I asked?

"In the 80s and 90s, it was a guru-led culture," explained Hirabayashi. "It was led by Oprah and Tony Robbins. It's antiquated today and in terms of power and the platform, it was top-down. Ours is more bottoms-up, made for a generation that wants more control around their schedule. The equivalent to Shine about 20 years ago was a conversation with a friend and hearing validation from a friend. That conversation is still powerful today, but we're providing this at scale."

Shine's demographic is primarily women, about 70 percent of their two million members across 189 countries are female, and 88 percent are under 35 years old. The reason has more to do with the two female founders attracting like-minded women. But increasingly they're seeing more males.

The biggest use case of the product is the daily inspiration text message. The daily message is created by Shine's editorial team. So unlike Whisper and Secret, apps that enabled millennials to connect with one another to share their deepest darkest secrets, Shine is more about creating structure through their daily messages. It's less about a decentralized system that enables people to just shout out loud anonymously, but to receive direction and guidance and in so doing, feeling less alone.

"Our focus is reducing this feeling isolation," said Lidey. "Every time we send a message to a user, the goal is to alleviate the isolation."

Shine recently launched a paid service for $4.99. For that price, you can get access to their uplifting content about how to break up with a toxic friend to Tinder fatigue. The content consists of meditations, affirmations and uplifting stories.

In total, Shine has raised $8 million to compete in what has become a very crowded field with startups such as Headspace and Talkspace, which are more heavily funded.

"We very much see ourselves in a blue ocean," said Lidey. "We don’t believe we’re competing with everyone. We’re always competing with time but we’re disrupting the self-help industry, which hasn't been updated. There's niche apps for meditation, but that's not necessarily ubiquitous. We believe in building a conversation, trust and a friendship."

At a time, when generations of people need friendship, support and community, it's nice to see Shine add a bit of that sunshine to many lives.