The company, which uses nets to capture malicious drones, is developing AI for autonomous detection 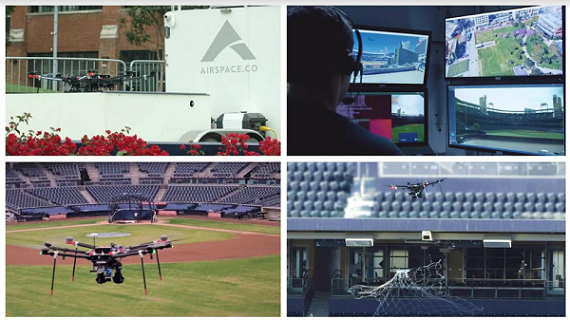 One of the more recent mantras among gun owners in America has been, "The only thing that stops a bad guy with a gun, is a good guy with a gun." Whether or not you happen to agree with that statement, it works pretty well when you apply it to drones.

As we've seen recently with the spread of misinformation on social media, even the most well-meaning of technologies can be co-opted by bad actors. In the case of drones that can be even more dangerous, as it might mean anything from using them to smuggle drugs over the border, to sneak contraband into prisons or, worst of all, to bomb a target.

That's where drone security solution Airspace Systems comes in. The company, which has designed its own hardware and software capable of capturing malicious drones, now wants to go beyond simply being able to stop a drone, but to do so autonomously, all but eliminating the need for a pilot.

On Monday, it raised a $20 million Series A round to put that plan into motion. The round was led by Singtel Innov8 with participation from s28 Capital, Shasta Ventures and Granite Hill Capital Partners. With this latest round, Airspace has raised $25 million in total.

There are basically two ways to currently take down a drone, Todd Komanetsky, COO of Airspace Systems, told me in an interview: kinetic, which means physically stopping it, or non-kinetic, which is doing so wirelessly. Examples of kinetic solutions can include shooting it down, or, as Airspace does, capturing the drone with the use of a net and then dragging it away.

“Our challenge, and the mission we’re choosing to focus on, is primarily how to defend over public spaces. The military shoots stuff down really well, but the main challenge for Airspace was if you shoot something over an event center it down falls to the ground. So very quickly the mission became to be able to physically capture and carry a drone, in particular one that was presenting a real significant threat, meaning potentially a weaponized drone, or a done that was out of control. How do you remove it from over a stadium, over an event, move it away from critical infrastructure? So that became very quickly the mission," he said.

The company does have the ability to do the non-kinetic kind of disabling as well, which includes jamming it with a broad frequency, narrow band jamming or potentially hacking into those signals. There are significant hurdles to that, though, including legal issues, as it requires prior authorization to not violate wiretapping laws. There's also the fact that hackers are often one step ahead, requiring constant iteration. While a complete solution would be able to see a drone a mile away, be able to wirelessly intercept and, if that doesn’t work, kinetically intercept it, physically taking it down is the easier is the solution that requires fewer headaches.

You can see a demonstration of how Airspace's technology works in the video below:

The company sells both its own software and its own hardware, due to the fact that Airspace's drones are specially designed for the capturing and carrying of other drones.

"The reason we build drones is because the capture and carry mission if very specific. We need a very, very fast drone that has the ability to lift and carry another drone in weight. So it's not like you can slap this on a DGI drone and make it work. The drones that we build are specialized just for that mission," Komanetsky explained.

"In the future, is this something that might get licensed out to companies that make larger, heavier, different specification drones? Sure, but today our focus is on delivering the capability as quickly as possible and that has meant we need to design those drones ourselves."

Airspace is currently ramping up the solution and the program to deploy it, working with certain sectors to determine how to cater to their specific needs.

"Currently, there are only a few military bases in the US with the legal authority to operate a Drone Defense system of any kind.  We are working closely with stadium owners, critical infrastructure sites, local and federal law enforcement agencies to demonstrate how the technology works, its safety and reliability in advance of that authority being granted for domestic use," said Komanetsky.

Going forward, Airspace is not going to be content with simply being able to shoot a net at a drone. It wants to be able to do that autonomously, allowing the drone to detect a target and determine its own path to disable it.

"We developed our net system to capture drones, and we developed a bunch of hardware and software to make that a robust process. That was a piloted system and what we realized is air to air combat is a really hard problem. Autonomy and making average pilots exceptional, and ultimately making pilots unnecessary is a much bigger challenge, for reliability, for scalability, for all those things," said Komanetsky.

"So almost 18 months ago the company shifted its course to focus not only on capturing, drones, but on the ability for that to happen autonomously. The drone now includes onboard compute power and machine vision, as well as some other sensors, including radar and lidar, which are other detection technologies, and they’re looking at new technologies that they might integrate that are lightweight enough and robust enough to fly. All of these things are sensors, or inputs, to an artificial intelligence drone that’s able to take all of this information in and pursue a target, get into a position to capture a target and then fly away."

One of the major benefit of making the drones autonomous is that it will enhance the ability to detect dangerous drones at much greater distances. Currently, it's not possible to see a drone that's more than 500 feet away with the naked yet, but by partnering with ground based detection solutions, including RF detection, radar detection, acoustic and optical detection, Airspace is able to can see a drone well over a mile away. That means it can intercept the drone much earlier.

Autonomy doesn't mean, however, that the human is being taken out of the equation, because, legally, that isn't allowed.

"You can’t fly a drone in the U.S. under any circumstances autonomously, but the vision for the company, and the road map of where we need to be, is this autonomous challenge. We’re one of the leading companies using machine vision, learning neural networks, to understand how to keep track of objects in the sky against a variety of backgrounds and to be able to understand how to navigate and avoid obstacles," said Komanetsky.

"Today, we consider it to be artificial intelligence assisting a pilot, because you legally have to have a pilot in the loop today, and the ability to autonomously act and fly a prescribed route or determine the best route for the pilot to fly is all part of that sensor engagement and awareness more capable of doing it."

With that in mind, Airspace intends to use the new funding to grow the organization, and to strengthen out its capabilities of both the engineering and the sales and marketing groups. That means building out its mobile command centers and making them available for services and purchase, as well as continuing to shift from R&D to production.

"Half our staff are software and integration people. We have to integrate detection from various vendors, and then we have software people that are working continuously on the artificial intelligence side of this to roll out versions of the software appropriate for different missions," said Komanetsky.

The funding, which was completed in January but only unveiled now, has already been used to build out its team to 32 people in total.

The future of drones

Airspace's solution fits into what it sees as the future of the drone space: the enforcement of rules and regulations that allow the space to flourish.

"How does the FAA enforce the rules on drones? Part of that is what Airspace is working on is the enforcement tools to be able to enforce them. There’s a number of recommendations out of the Drone Advisory Committee, which is the FAA’s public partnership with industry leaders, on how to do that and it’s a good indication of where the drone industry is going," said Komanetsky.

"Part of opening up to all these new technologies is regulation. Legally, today, law enforcement doesn’t have the authority to shoot down a drone. Last week the White House proposed that they would put legislation into effect before the end of this year to give that legal authority to law enforcement personnel, fire fighters, corrections officers and border patrol people. Once those things start to resolve themselves then the floodgates really open on the drone industry. Being able to truly have drones that autonomously fly and drop things off and move materials around is fantastic."

Airspace's role going forward is going to be as the comprehensive solution for sites and industries that require that kind of enforcement.

"Pne of the risks for a data center is that a drone can fly, land on the roof and hack into your data center via WiFi and capture that information. It‘s not an insignificant problem but it may not require long range radar and a suite solution because of the human factor and the risk. We see ourselves as being the primary individual deploying to law enforcement personnel and public event centers, putting together that comprehensive solution.”